As I slide into a new era in my career, schools and teams are increasingly asking me to evaluate the direction of their strength training programs. This article will describe my basic tool kit for doing so – although I worry that much of it will appear laughingly obvious!

Few people take the time to march through the simple steps to assess and evaluate their training as a whole. Certainly, we've made great strides recently in assessing movement with the Functional Movement Screen, and we're miles ahead in the area of blood tests, MRIs, and sonograms for evaluating what's going inside without having to use a knife and scissors.

However, most programs still lack a simple audit, monthly or yearly, to look under the hood to see if we're really filling the gaps.

And that's exactly what I do first – I look for the "gaps" in a program.

Do you do the fundamental human movements?

It still stuns me when I see a program that claims to be balanced yet ignores what I see are key movements. I've covered these movements before, and people were frankly stunned to find that something as simple as farmer's walks (the basic loaded carry) could make such a difference so quickly to a training program.

So step one is to fill the gaps. I still enjoy a few sessions a week of Bikram yoga and recently, as the sweat streamed across my eyelids, decided to evaluate it. Clearly it's not a lifting program, but save for loaded carries, it involves all of my fundamental human movements. Following the directions, one will swim through pushing, pulling, squats (the "awkward" poses), hinges, and groundwork.

And that's a full 45-minute session of groundwork. I noted in a recent yoga session that I was rolling around the ground from position to position for almost half the session. And getting up and down off the ground is becoming a rarity for the adult population.

The French came up with a very interesting little test of rising and sitting to the floor. If only your feet and butt are needed, you get a 5 rating. If one limb hits – knee, elbow, or hand – you get a 4. Two hits and you receive a 3. The study goes on to find connections between longevity and the score on this test.

Literally, we need to roll around on the ground more. I have one bit of advice for my older clients: watch all the television you want, but you must be on the floor sitting when you do. Try this. You'll find soon that you roll, pivot, twist, change, and flop the whole show. It's a cheap workout.

When I assess most programs, groundwork is usually a few sets of crunches and that's it. Groundwork, tumbling and wrestling can transform a program in a few weeks, but few will adopt this simple strategy.

Something as simple as the rolling portion of the Turkish get-up is a good start and I suggest everyone begin adding more work from the floor.

Auditing the program is difficult. I suggest two sets of numbers, but with both of them, there's an additional important step.

First, count the total number of reps in a program over perhaps something as short as a two-week block. Let's use this as an example:

Obviously, in this example, I'm trying to show that the Push-Pull ratio is pretty unsound. 1:1 would obviously be better and I might even have a 1:2 ratio for a male in the offseason.

The problem is the hinges and farmer's walks and, honestly, they're always the problem in this audit. If those 15 hinges were all serious and heavy deadlifts, I'd suggest that business was being taken care of. Doing 500 kettlebell swings with a 50-pound kettlebell might be the ticket to general conditioning and fat loss, but it might not be as impactful as a single 500-pound deadlift.

Farmer's walks and the whole family of loaded carries are another issue. "Down and Back" might count for two reps, but those two reps might take everything you have to complete.

But as I tell the gym owners, counting the reps at least gives you an insight into what you're doing. Even when most men know that they're doing too many pushes, it's hard to cut back as they appear throughout the warm-up (push-ups and a host of transition movements). Dozens of pressing-based machines at their disposal also provide a powerful temptation.

There's another simple tool that works wonders. It's so simple you may miss its value:

Every time you include an exercise, check the exercise on your master list.

If I think front squats are important and have 150 training sessions a year and the front squat ends up with 120 checks, I can assume my mouth and my program are on the same general course.

It also gives insights into a program's variation issues. For example, let's say these are your press variations:

And these are your squat variations:

As you can see, there's a bit of an imbalance. Either you believe that the back squat is the answer to any and all questions or you need to rethink your squat variations.

As far as loaded-carry variations, it's tough to really find some that don't look like idiocy after a while, but some variations from suitcase carries to pushing trunks will keep things fresh. 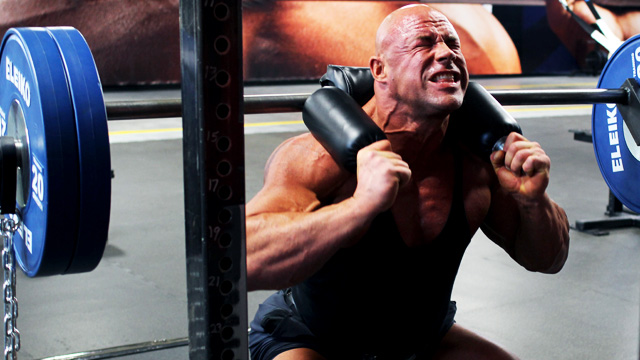 Once you see gaps, the program's standards suddenly become clear. I've felt for years that my "Standard Standard" isn't a bad start.

Basically, I feel that the clean, front squat, and bench press should be "around" the same number. I train athletes and this simple formula has withstood the test of time. If you bench 500 and get crippled with a 135-pound front squat, we need to talk about balance.

"Best Lifts All Time" tend to favor genetic superstars, but standards reward hard work. A program's standards should reflect the goals of the program and the kind of training we're doing.

I suppose this is why I am such a fan of Jim Wendler's 5/3/1 program consisting of bench press, deadlift, squat, and overhead press. By simply adding some sled pulling and farmer's walks, a tumbling session on Wednesday, and some daily groundwork and technical practice, I could make this a gapless program.

Jim recommends this in his famous "North of Vag" program. Using this template, I can establish a number of standards that are obvious and attainable. I've felt for years that a high school boy simply needs to deadlift 315 pounds, and 400 pounds is an appropriate goal for most football players. Wendler's program gets the athlete to these basic standards.

Most facilities should use some kind of "magic device" that will show the athlete "if you do this here, you should be able to squat that." I used a "Spider Web Chart" for years, but I can't beat this little program.

The final area I look for in evaluating training programs is "fast twitch." Years ago, I picked up a book by Phil Campbell, called "Ready, Set, Go! Synergy Fitness." The book underscored the joke we had in track and field for years:

"Go to a Masters track meet. Look at the runners as they go by and guess their age. To get it right, minus ten (as runners look much older than they are on their birth certificate). Then, go watch the throwers, jumpers, and sprinters. Guess their age, but, to get it right, add ten years at least."

Fast twitch keeps you young. It's also crucial in the strength program. How you get it can vary from doing the quick lifts to jumping to sprinting to pushing a Prowler, but you need to reach into those fibers that make you, as the commercial used to say, "run faster and jump higher!"

For a middle-aged person, Bikram yoga is going to do marvels for their mobility, flexibility, basic movements, groundwork, and recovery. Toss in some presses, goblet squats, and a few weekly sprints and you have everything covered. I have a sprint program called the "Great Eight" that's based around the mantra, "start slowly and ease off." I'll wait while you chuckle to yourself.

Sprinting is digging a deep hole in recovery, though. For my high school track and field sprint corps, I have a "rule of 1200." We never go hard for more than 1200 meters in a session. Now that can be two 600s, 12 -100s or whatever, but it's very hard to sprint fast for more than that in a training session.

Also, you might like my 400-meter runner diet. Literally, eat anything you want before practice. Enjoy. Then, sprint the full 400 meters. Repeat twice. Again, don't worry about what you ate because you left it in the grass next to the track.

Auditing a training program can be simple. Ask yourself, "What are the gaps in my movements?" Try the two-week test of counting reps, and then think about the quality of movements.

If you really want to look deeply into your training, chart out the movements over a year-long period. Extremes either way might need discussion. For example, my sophomore year in college, I only did five lifts the whole year! Some of you might have dozens of variations and wonder why you're not getting stronger.

Next, address these two final keys: are you balanced in your standards and do you explore training with explosive fast twitch moves? Ignoring either of these is the royal road to frustration.

Audit your training and address the issues you find. 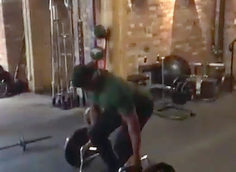 Yes, you need to stretch your hip flexors, but you'd better do it right. Here's what you need to know.
It Hurts Fix It, Tips, Training
Dr John Rusin September 5