Old-time bodybuilders called them the "leg biceps." We just call them the hamstrings, and many hypertrophy specialists believe that the average lifter could gain an easy 10 to 20 pounds of muscle if he worked harder and smarter on this universally underdeveloped muscle group.

So why do most people never build great hams? We surveyed a bevy of strength coaches, kinesiologists, and bodybuilding gurus and they all said the same thing: Most people are essentially training only half of their hamstrings.

See, the muscles that compose the hamstrings – the semimembranosus, the semitendinosus, and the biceps femoris, plus a host of synergists – have two functions: bending the knee and kicking the leg back (as in a sprinting motion). Problem is, the average gym rat only trains one of these functions, leaving vast amounts of muscle fibers untapped and, well, as puny as a Jonas brother deadlifting.

What about function #2, the extending-the-hips part? Well, the best way to target that part of the hamstring musculature is to use exercises that involve a straight leg: semi-stiff leg deadlifts, good mornings, reverse hypers, etc. So if 80% of your hamstring work has only involved hamstring curl machines, you're really shortchanging your physique development!

Already got that stuff covered? Good for you. Below we've collected some of the most powerfully effective exercises and techniques we've seen for overall hammie hypertrophy, including a couple of ways to turn the ol' hamstring curl machine into a real mass builder. You may notice that we left out deadlifts, but that's because, presumably, you're already doing them (right?).

This one isn't an exercise but a crucial loading technique. Get this part right and you'll maximize hamstring hypertrophy.

Based on the two functions of the hamstrings and the fast or slow-twitch nature of each, here are the rules:

Charles Poliquin recommends never going over 8 reps for hamstring curls. He also notes that experienced lifters with a higher training age may only need 3 reps per set of hamstring curls. But, that means higher sets. Try 10 x 3 for ham curls and prepare to feel "special" for a few days after!

In one of the earliest programs to appear here on T Nation, TC told his readers to take off their pants. And not just his female readers.

He was giving them a lesson about something called the gluteal fold. That's where your upper hamstrings meet your butt. If you have a well-developed posterior chain, this should be smooth – no fold.

And it's not just an esthetic thing. A big fold could mean that you need more hip extension work to prevent hamstring pulls, imbalances, and a goofy-looking physique.

Gotta fold? Then get outta the gym and try TC's sprint program. Here it is:

Do this in place of your regular leg workout. After a few workouts, look to increase the distance of each sprint up to 50 yards.

If you give each sprint 100% and push it hard, you'll wake up with some very interesting soreness that'll tell you exactly what you've been missing in the weight room. Stick with it and you'll also develop some new leg size and that important glute-ham tie-in.

We don't mean to bash the trusty leg curl machine. But we do want you to 1) avoid using it exclusively and 2) use it correctly.

Based on loading, foot position, and proper tempo, here's how to perform the ultimate leg curl:

Lift the weight with the feet dorsiflexed: your toes pulled up (lifted toward your knee).

Lower the weight with your feet plantar flexed. Point your toes, in other words.

This will take a bit of practice but it's a technique used by just about every expert in the biz: Jimmy Smith, Poliquin, TC, and many more. They use it because it works. You should too.

The leg press machine can be used to focus on the quads or hams. Sure, the sports performance coaches don't like it much, but the jacked bodybuilders with big honkin' hamstrings sure do! Here's how to maximize it for hamstring development. It's simple really: 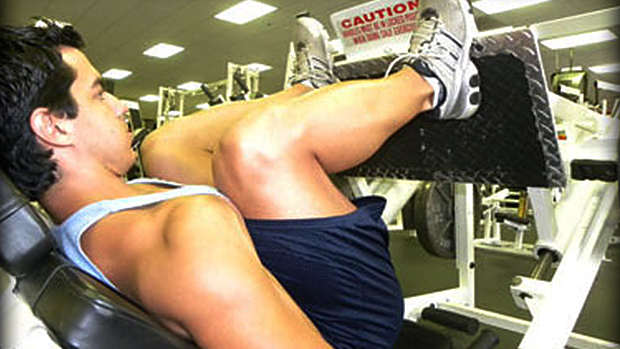 We've talked a lot about the two functions of the hamstrings. Well, here's an exercise that trains both functions in one slick movement. As a bonus, it hits the glutes as well. And that's cool because that means when you shake your money maker it'll be worth more than a buck-fifty.

Simply attach one of those furry cuff things onto your ankle, attach a cable to the cuff, and face the weight stack at a slight angle. You'll also want to bend forward from the waist as much as possible (to stretch the hamstring at the hip and the knee).

Start the movement by extending the leg backwards and upwards as far as it'll go. Then, when you've extended the leg all the way, continue the exercise by curling the lower leg. Bring the heel as close to your bum as possible. (Remember to do the movement at a slight angle to the weight stack; otherwise, the cable will hit your kneecap when you curl it back!)

Reverse the sequence – extend the lower leg until the leg is straight and then lower the entire leg to the starting position – and begin again.

Simply lift the weight with both legs, transfer the load to only one leg at the top of the movement, then lower it slowly over a period of several seconds using only that single leg.

So, lift with both legs, lower with one, repeat. You can alternate and lower the weight with a different leg each time, or you can perform all reps (8 or fewer) while lowering the same leg every time. Load selection is based on how much weight you can lower with one leg, so you'll need to start lighter than normal with this one.

We like to use the eccentric hamstring curl as a "finisher" – just perform your standard hamstring workout and finish them off with this teeth-clencher!

No glute/ham machine? Sucks for you. But here's a brutal alternative: the natural glute-ham raise.

Either hook your legs under something or have a very burly training partner hold down your legs at the ankles. Now slowly lower your body to the ground while keeping your back straight and focusing on the hamstrings. Once you reach the bottom, perform an explosive push-up motion. That's when the hams and glutes will kick-in. Pull yourself back upright with your hams. Try not to pee your pants.

Beginners may have to perform this as a negative-only at first, and be prepared to catch themselves as they crap-out halfway down!

If you're one of those lifters who has focused most of his hamstring work on the curl machine, then you must be punished. This superset, which is all extensor work, is especially for you. 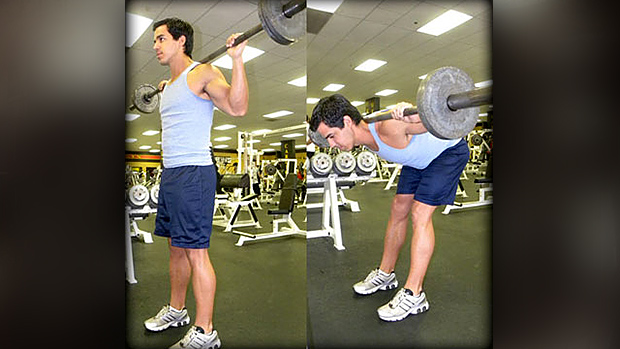 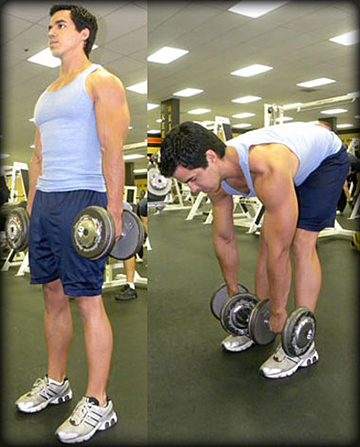 Wrap-Up and a Final Tip 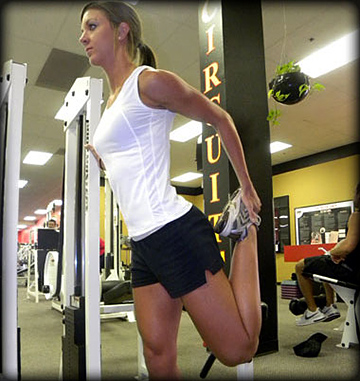 Poliquin leaves us with this last tip:

"Stretch the quadriceps between hamstrings sets. Increasing the range of motion of your quadriceps prior to a leg curl exercise will increase the amount of motor units used in the hamstrings during the exercise and therefore, the effectiveness of the chosen exercise.

"Since the quadriceps are the antagonist muscle(s) to the hamstrings, and that stretching will allow it to relax, the force of the contraction in the hamstrings will be much greater in the subsequent contraction."

Give these exercises and techniques a shot, then get ready to flex your "leg biceps!"