Dumbbell side bend variations are not the best core exercises for your obliques. They're not the worst exercise, but they're pretty darn close.

Improper technique and lack of abdominal tension, coupled with a dumbbell pulling you into excessive lateral flexion, results in the potential risks far outweighing the rewards. Luckily, there are far better options. (Examples later on below.)

Core Exercises: The World's Dumbest One

Dumbbell side bends are a common oblique exercise that requires you to laterally flex your spine. Many seem to think they're chiseling their obliques and developing deeply etched abdominal lines that accentuate that "V" going down into their pants. In reality, they might be putting themselves at far greater risk than the exercise is worth.

Side bends are most frequently performed using one dumbbell, but you've probably seen someone down at your local Globo Gym bending left-to-right using two dumbbells.

Obviously, this is silly and does nothing for you. One dumbbell is far better than two:

The problem? One-dumbbell side bends are often performed incorrectly, resulting in a lack of tension through the core. Improper technique also results in the dumbbell pulling you into an excessive range of motion. Essentially, the dumbbell pulls you outside of the active ROM where your obliques should otherwise be maintaining a high level of tension.

This is the tension that both helps build your obliques as well as support your spine (along with the rest of your core musculature).

Sure, do several sets of side bends and you're sure to feel it in your obliques the next day. That's because your obliques were being loaded and overstretched at the same time. But, in the long run, the lack of spinal support and excessive degrees of spinal motion means the risk just isn't worth it.

Solution: Use a Cable Instead

Using cables allows you to change the point where the load is maximized. It's the line of the cable resistance running perpendicular to your torso that makes all the difference. That can be manipulated depending on where you set the cable.

Additionally, you're being pulled towards the cable, and your hip stabilizers have to work extra hard to resist collapsing into adduction. Cable side bends are a more "complete" and integrated core exercise.

In the above video, I'm doing a low-cable setup. Depending on the height of the cable, you can load different portions of the movement. For example, with a low cable, the point of maximal load is greatest as I'm near the full sideways bend. This is evident by the angle of the cable relative to my torso (closer to 90 degrees).

If the cable were high, the cable load would be greatest as I reach closer to upright, but less as I begin to bend more sideways.

So, you can vary the height of the cables to change the emphasis and feel of the exercise. Feel free to experiment and go with whatever height feels good to you.

Tate side bends (popularized by Dave Tate) will fast become a favorite if you like your ego stroked by the amount of weight you can use. But we're not talking about unnecessarily heavy, half-rep leg presses here. Far from it.

Once you manage to wrestle the cable into place by your side, the locked-in position, combined with the weight, results in a high-tension sensation through your midsection.

To do these effectively, imagine you're squished between two panels of glass so you're only able to bend sideways, not forwards. Isolate lateral flexion as much as you can with all of these exercises.

If you're looking to add some habanera-level spiciness to your side bends, then here's a "triple threat" set idea courtesy of Nick Tumminello.

This set works to apply maximum load to your obliques during lateral flexion at three different points, as well as working as somewhat of a mechanical drop set.

Perform 7-10 reps in each of the three positions. And, please note, the video is in 2x speed, so don't start thinking tension and tempo should ever go out of the window.

If you only have bodyweight to work with, then you've still got some effective options. One of my favorites is the side plank raise:

These are pretty much side planks, but you're letting your hip collapse towards the floor and then raising back up again. Much like a cable side bend, you'll be loading lateral spinal flexion and hip abduction, but in a slightly different fashion.

Side plank raises can also be done with your elbow elevated on a bench or box to increase range of motion if you need it. Alternatively, if it's more weight you're after, then a plate held to your top hip, or even some hanging chains, would work.

Now Get to Work

Side bends using two dumbbells are dumb. Period. Side bends using just one dumbbell serve very little purpose – the risks outweigh the rewards. Cable and plank variations will give you better results without the risks.

Bench press like a monster, not like your mommy. These 5 exercises and the included program will blow up your bench, guaranteed.
Bench Press, Chest, Powerlifting & Strength, Training
Derek Binford September 22 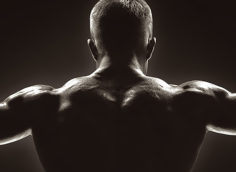 EMG studies determine that the most effective lateral raise is also the most dangerous version. Check this out.
Training
TC Luoma November 20

Blow out all your air on the way down and contract hard. Do 10-12 reps.
Abs, Exercise Coaching, Tips
John Meadows February 28