I’m a national level bodybuilder and absolutely love the sport, but I’ll always have a soft spot for powerlifting. My affection stems in part from having trained at the one and only Westside Barbell in the early 90’s, where I had the chance to witness the mad scientist Louie Simmons in action.

What impressed me so much about Louie was that his methodologies were constantly evolving. In fact, Louie used to say he didn’t really have a method at all, because when he became set in his ways, he wouldn’t get any better.

This is increasingly true as you become more advanced. You can’t just “do the basics” ad finitum and expect consistent gains. You’ll eventually plateau – we all do – which is when you have to find ways to identify and overcome weaknesses. Louie preached that, lived it, and it’s not a coincidence that he’s about the best strength coach in the world.

Two tools that powerlifters have used with great success are bands and chains. The strongest powerlifters in the world use them as part of their programs, and the results are undeniable.

There are many articles that discuss how much chain to use, what strength of bands, which exercises, etc. Dave Tate also wrote a great piece about it for T Nation in Accommodating Resistance.

This article will focus one how to use bands and chains for gaining muscle.

This is the center of the discussion. Bands and chains increase the intensity of an exercise by allowing maximum loading at every point of the range of motion, allowing for greater applicable tension over time.

It’s a game of joint angles. You simply have more strength and greater leverage at certain joints more than others.

Think of it this way: how much can you squat ass-to-floor? Now compare that to how much you could squat using half or quarter-reps. Obviously, you can handle more doing quarter-reps. So if you can do deep squats with 315 pounds, at the halfway and quarter rep-points of the exercise you can likely handle more.

This is what bands and chains allow you to do. For instance, take chain squats. When you squat down, the chain “deloads” or lies on the floor, but as you come up, more of the chain lifts up off the ground, increasing the amount of weight you’re actually lifting.

You’re getting challenged throughout the entire rep, which is great for a powerlifter because you can work on weak points in the range of motion. For bodybuilders, this means increased intensity, and intensity is key for getting muscular.

One of Louie Simmons’ influences, Vladamir Zatsiorsky, describes accommodation as something that causes performance to stagnate, as the response to a constant stimulus decreases over time.

This is the big issue I have with lifters who say to “keep it simple” and do the same things over and over. They ignore this principle, and based on what I see in the trenches, accommodation is very real.

Here’s why bands are a double-edged sword. They make the negative or eccentric part of an exercise much harder. Attach some bands to a leg press and you’ll see what I mean – you have to really fight the weight on the way down or else it feels like it will bust your ass into particles.

Bodybuilders know that the eccentric part of a movement is where you cause the most muscle damage and set the stage for remodeling a bigger, better, muscle fiber.

However, you have to be careful. There is a point of diminishing returns where you can easily overtax yourself. I’ll discuss appropriate frequency in more detail below.

Now that we’ve defined accommodation, accommodating resistance, and eccentric overload, let’s focus on how to build them into a bodybuilding plan.

Powerlifters are concerned with lifting insane amounts of weight, not having 21-inch arms and a pronounced quad “sweep,” so their programs typically use far fewer reps than bodybuilding programs.

So a powerlifting program could use bands and chains while working up to a heavy single to develop maximal strength, or use them with lighter “submaximal” loads to help develop speed.

Bodybuilders, on the other hand, must focus on hypertrophy, and require more reps. I’ve found 6-8 reps to be the best hypertrophy rep range when using bands and chains.

I discovered this quite by accident, after trying banded leg presses with my usual higher reps (10-20). In just three or four weeks, I actually started losing strength.

The weights seemed insanely heavy – it was as if my nervous system was shutting down from the extreme intensity.

I took note and started backing down reps, eventually arriving at around eight. And after just four weeks of training banded leg presses for sets of eight reps, the sweep of my outer quad had noticeably improved.

However, that wasn’t the end of the story. After six weeks or so, I started to hit the point of diminishing returns again. My legs started losing the size that I’d just put on, likely due to accommodation and CNS overtaxing.

Again, I was forced to regroup, and came up with using bands and chains for six weeks on/six weeks off, and the results have been excellent. I now build them into my 12-week training programs during weeks 4-9, the highest intensity and volume phase.

The feedback from many clients, especially from seasoned vets like Shelby Starnes, has made me feel like a proud papa, as they’ve all reported that their teardrop, quad sweep, adductors, etc., were gaining tremendous size and detail.

The biggest problem I have with using bands and chains is that I don’t want to go long periods without using them. Fortunately, I’ve found another way that I can effectively program them in every other week.

This way, in a 12-week block, you’d use bands six times; the same as using them in every session from weeks 4-9. I’ve found either way works well.

Here’s a sample six week run using bands on a leg press. The trick is to gradually increase the band tension every two weeks. On all weeks, do sets of eight while ramping the weight until you reach a load you can barely get eight reps with, then stop. 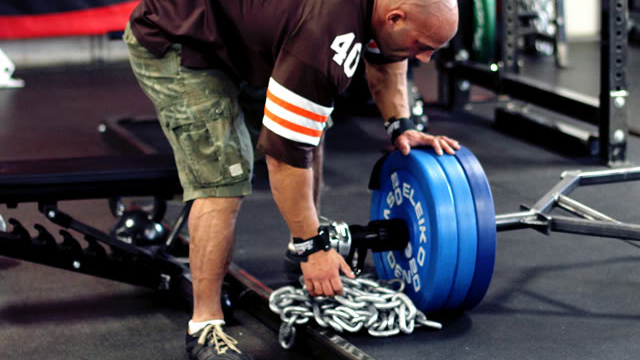 The same logic can be applied to chains. Here’s a sample squat program – it assumes that you’re an experienced lifter that’s been around the block. On all weeks, do sets of six while ramping the weight until you reach a load you can barely get six reps with, then stop.

As for when to add the chains, I like to work up to a set weight and then just start adding chains – but no more weight.

No discussion of bands would be complete without mentioning the lightened method, or “reverse banding.” Earlier I noted how bands add eccentric overload and pull the bar down towards you. The lightened method is just the opposite.

Take the bench press, for example. Instead of attaching the bands from the bottom of a power rack, you’d attach bands from the top of the rack. This way, when you lower the weight, the bands help you lift the weight off your chest. But as the weight comes up, the bands get slack and don’t help as much near the top.

Remember, we’re stronger during certain parts of an exercise, so we’re limited by whatever our weak point is in a given range of motion. In the bench press, which has an ascending strength curve, we can lock out significantly more than we can budge off our chest.

Another reason I like reverse banding is safety. You can simulate lighter loads in the positions where you’re most vulnerable to injury, such as the bottom position of the bench press, but still have heavier loads after you pass the danger zone.

This is training smart. Bodybuilding can beat the hell out of you, and one bad tear can end your career.

On the other hand, reverse banding also allows you to overload the stronger top ranges for greater growth. I recently did reverse band benches with 455 pounds for sets of five. It was probably only 365 pounds out of the bottom, and likely 425-435 at the top. Had I tried to bench 425 without the bands it would’ve stapled me at the bottom. This is an awesome way to thicken your triceps.

There isn’t as much scientific data supporting accommodating resistance and muscle size as there is strength, but rather than wait for it to come out, we’ll do what we always do in the bodybuilding, powerlifting, and weightlifting world – let science catch up to us.

Different muscle fiber types do not grow at the same rate. Type 2, also known as fast twitch muscle fibers, have the greatest capacity to grow. For maximal growth, you need a combination of volume and intensity.

Intensity can mean applying maximal force throughout the rep as noted above, but it’s also believed that it can be done by way of training explosively to engage the fast twitch muscle fibers (Hakkinen et.al., 1985; Thorstensson et. al., 1976; Connelly, 1992).

So what does this look like in practice? When you squat down with a load of chains on the bar, the weight “deloads” at the deep position. What would happen if you continued to apply the same force that’s needed to get that weight up when the chains started lifting? The bar wouldn’t move – and you’ll fall on your ass. You have to apply more force as to overcome the additional resistance of the chains.

Once you train this way, you can almost feel your body becoming more explosive. There’s a neural connection that’s being unlocked here. You can even feel this during a workout. You might do a set of squats with 225 pounds on the bar and four chains, and when you add two more chains, it will often feel easier. In my best technical terminology, stuff is turning on.

Setting up Bands and Chains

Ready to give this a whirl? There are certain exercises that I’ve grown to love using bands and chains with. I’ve also included some videos to help you set these exercises up. I can’t cover everything, but feel free to post any questions on the LiveSpill.

Attaching bands to do the lightened method for benching:

You can also do squats, deadlifts, overhead presses, inclines, and many other exercises this way.

One of my favorite banded exercises for chest is on a Hammer strength flat pressing machine. Here’s how to set it. Once you do this, I promise you’ll be hooked. The pec contraction is unbeatable.

Setting up bands for leg presses:

Below is a video that shows banded benches, and if you watch it you can see what I mean by eccentric overload. I got a little overzealous on this one (used bands that were too thick) and you can see how much the bands pull the bar down.

When you set up chains, make sure there’s always a few links on the floor at lockout. If not, the chains swing, turning this into one heck of a core stability exercise.

My favorite two chained exercises are deadlifts and squats. Here’s some footage of squats with chains:

I also like to use chains on deadlifts, barbell curls, floor presses, lying triceps extensions, and good mornings.

I’ve found that doing one all-out set with chains in your workout is an excellent shock. A prime example of this is chain deadlifts. In this case, 10-25 reps work awesome. Go balls out, and reap the rewards. The squat video above was one of those sets.

Two things to remember from this article: