The Most Important Thing I Know About Training

When I got the opportunity to write an article for T-Nation, I asked myself, "Self, what's the most important thing you could talk about?" The answer was clear: back-off weeks!

Back-off weeks, planned periods of light training, are critical to any serious athlete when structured carefully. Backing off is so important that even those who use steroids need to do it. Problem is, most weight-trained athletes are unable or unwilling to take a break!

Look around your gym. I'll bet you see lifters of all disciplines doing the same sets, reps and weights month after month. You'll hear talk about never missing a workout and how a hardcore attitude is the key to getting bigger and stronger. You'll also see those same people on a plateau so big they probably think the world is flat!

Know a lot of drug-free or non-genetic freaks making constant progress? Probably not.

Unless they grasp the science of adaptation, once they pass the initial phases of training they'll reach a plateau and set up camp there. If you're on that plateau with them, this article will save you years of training frustration and months of pouring over Dr. Mel Siff's Supertraining.

Let's break down the back-off week so you can start making progress again!

In theory, distributed loading is possible, but time under tension is also important. . . in theory. In practice, unless you have no job, no stress, you're on massive amounts of drugs, you eat a ton and sleep a lot (in other words, you're an unmarried pro-bodybuilder), your training is, in reality, concentrated loading.

It's widely accepted that in a concentrated loading cycle you can only go 4-6 weeks maximally without a back-off. While I'm dispensing with lots of boring and technical explanations, if you enjoy this type of thing I strongly advise buying Supertraining and taking a paid leave of absence from your job. This is where my unmarried pro-bodybuilder idea might come in handy.

While 4-6 weeks is a maximum time span, it's not optimal for most lifters. I'm confident that if all of T-Nation reviewed their training logs, the vast majority would discover nothing works for much longer than 3-4 weeks.

Drive Your Peaks, Plan Your Valleys

When I first read about maximal adaptation taking place in the second week of training and tapering off quickly afterwards, I was in immediate denial. All bodybuilding programs and almost all powerlifting programs I knew of at the time had no back-offs of any significance. Then I happened to find a book called Consistent Winning by Drs. Ronald Sandler and Dennis Lobstein, both endurance athletes and coaches. They insist it's possible to drive your training peaks by planning your valleys.

The good doctors go into all sorts of esoteric Fibonacci numbers, the Golden Ratio (don't ask), and some interesting case studies to lay out some naturally occurring cycles. The part you need to know is that they show that three weeks of hard training, followed by a back-off week, is the optimal cycle length and will help you avoid bad training weeks.

Why push a training cycle beyond three weeks on the off chance week four will be better? I submit that if you're going hard on weeks 1-3, on week four you'll almost always perform poorly. Instead, back off and start back up again. In a 52 week year, if you do three weeks of hard training and a one week back-off, you get 13 cycles. Are 13 PRs a year possible? Yes!

Take a look at the recently published training cycles of people like Louie Simmons, Boris Sheiko, Robert Roman and Pavel Tsatsouline. While they're all weightlifting or powerlifting focused, they build their cycles around a "three weeks forward, one week back" schedule. Applying this to bodybuilding is very germane.

If you keep your volume constant and increase your intensity over three weeks, or increase volume while keeping intensity fairly constant over three weeks, you'll simply gain muscle if you eat enough. Note that I didn't mention a monster pump, going to failure, barely being able to crawl from the gym, or wearing a do-rag and sunglasses as critical to gaining muscle!

The back-off weeks will help you avoid an injury, more fully recover, and also set you up for more gains. During a back-off week you'll feel yourself itching to train, but resist this and only do very nominal work.

Some guidelines: During the back-off week, perform only half the volume and two-thirds of the intensity, but only on one compound exercise per body part. You can also have some fun by doing an exercise for high reps, like bench press with bodyweight, floor press with dumbbells, walking lunges, low back machine, etc.

The goal of this week is to enhance recovery and position yourself for future gains, and nothing else. Eating well, a massage, some chiropractic treatment, some stretching sessions, some serious hot time in the hot tub, a long walk, or a nap or two are good ideas during this week.

By Friday or Saturday you'll feel a physical "itching" in your muscles. This is technically known as Delayed Training Effect, or "what it feels like to be almost fully recovered." Full recovery can take as long your preceding training cycle, so if you're doing three week cycles, it would take at least 2-3 weeks of back-off to be fully recovered. This is called "tapering to a peak" and is a whole other subject.

Okay, now for the homestretch and how to put this to work. As a powerlifter I apply this concept by going heavy on week one with moderate volume, a bit lighter week two with a lot of volume, then on week three I go as heavy as possible with more volume than week one, but less than week two.

I wave volume and intensity separately, but holding volume constant and just increasing intensity is also good. Week four I back-off with either the NFL press combine test (225 pounds for max reps) or a few sets of high rep dumbbell floor press. That's it. For lower body maybe some reverse hypers for 15-20 reps or maybe some Romanian deadlifts. Again, that's it. I take it easy the rest of the week.

Other top powerlifters have also had success with a similar plan. The Metal Militia guys are some of the biggest and best benchers on the planet. Their supplementation is, shall we say, more "diverse" than mine. They train like maniacs and then do nothing on week four. That's right, nothing!

"What about experiencing atrophy (muscle loss) from not stimulating a muscle for 72 hours?" you might ask. To which I might respond, "Horse puckey!" If you try this you'll be fine, and you might even find yourself growing muscle right in front of your eyes on week four.

You can apply this plan to any bodybuilding workout scheme. A great approach to try here is Chad Waterbury's 10 x 3 for 1 cycle, 5 x 5 for 1 cycle, and then 4 x 6 for a cycle. Make a bigger jump in intensity from week one to two than week two to three. Your max adaptation really is between weeks one and two.

For example, you could start at 70% of 1RM on week one, jumping to 80% of 1RM on week two, then only jumping 5% (to 85%) on week three. You can train a body part twice a week as long as you change your main complex exercise or rep scheme.

I prefer different exercises as I don't like high reps. For example:

Throw in one or two assistance exercises for 3-5 sets of 5-8 reps and you'll have a winner. Ten and higher rep sets have a small place in training, but keeping it heavy and low rep is better in almost every case. Another article for another time!

Some other applications that are possible here include:

1) Plan back-off weeks to coincide with vacations or business trips.

2) Take an unplanned back-off week if family or job stress overwhelms your training.

3) Getting sick? Good time for a back-off week!

If you're one of those gym rats that always hammers a workout no matter how stressed, sick or busy you are, all I can ask is, "How's that plateau? Is the view nice from there?"

I spent the first five years of my training learning to never miss a workout. I've spent the last 25 learning which ones to miss or throttle back.

Honing this approach has helped tremendously in bringing my bench from 435 to 525 pounds (at 43 years old) and my total from 1670 to 1800 in the last year. These lifts were all done in single ply gear and I'm tested randomly for drugs year round.

If you wisely decide to try this, one last point to clarify: The first time you try the "three weeks forward and one week back" cycle, you also need to rest the first week. Yes, back off a week, hit it hard for three weeks, back off week, repeat.

Doctors Sandler and Lobstein use a great analogy about a catapult being set by pulling it backward. Just charging into a new workout approach already beat up by your current training will yield failure. A back-off week, on the other hand, will really cause your training to shoot forward. Having a life outside the gym, at least every fourth week, also just might help you avoid that unmarried bodybuilder thing I mentioned above. 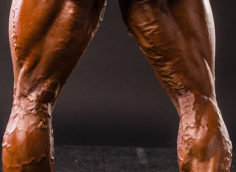 The countless hours many of us spend stretching our hamstrings are a tragic waste of time. Here's a legitimate way to fix the problem.
It Hurts Fix It, Training
Adam Vogel November 19 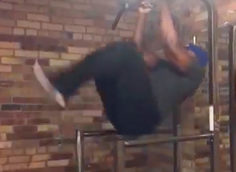 In this big/tall guy version of the leg raise, use bent elbows, tuck the knees, and lever from the shoulder joint.
Abs, Exercise Coaching, Tips
Lee Boyce June 25