The eccentric action of a muscle refers to a resisted lengthening of that muscle. In short, the muscle is exerting force while it's being lengthened. This type of action has also been called the yielding action (opposed to the overcoming action which refers to the actual lifting of the resistance) as well as negative action.

As I'll explain more in-depth later, it's the yielding or negative portion of an exercise which gives us the most bang for our buck. So, an individual seeking maximum results should plan training methods emphasizing eccentric overload. How? I'm glad you asked.

It's been a while since we've known that the yielding (eccentric/negative) portion of an exercise is responsible for more strength gains than the overcoming (concentric/miometric/positive) portion. For example, a study by Hortobagyi and coworkers found that the total maximal strength improvement from eccentric-only training brought more strength gains than a concentric-only program followed for six weeks.

By total maximal strength, I mean the sum of maximum concentric, isometric, and eccentric strength. In that parameter, eccentric training gave a mean improvement of 85% while concentric training led to an improvement of 78%. Furthermore, this study used submaximal yielding actions and maximal overcoming actions. Surely this tells us a lot about the potential of yielding strength training, at least when maximum strength gains are concerned.

We should also note a study by Hilliard-Robertson and coworkers which concluded:

This is in accordance with an early study by Komi and Buskirk (1972) who recorded greater strength increases after an eccentric training regimen than after a concentric-only regimen. It was also found that omitting eccentric stress in a training program severely compromise the potential strength gains (Dudley et al. 1991).

The last study mentioned above found that eccentric-only training led to an average muscle size gain of 6.6% over ten weeks while a concentric-only program led to gains of 5%. While the difference may not seems to be huge, any bodybuilder who knows his stuff understands that 2% more muscle over a ten week period can be important, especially in the long run.

These results are backed by another recent study (Farthing and Chilibeck 2003) which concluded that eccentric training resulted in greater hypertrophy than concentric training.

For most of us, strength and size gains are the name of the game. However, the positive effects of negative training don't stop there. We could also note the following "fringe" benefits:

The last few sections were very dense in scientific information, but what does it all mean in the real world? It means:

This technique can be used quite effectively with exercises such as seated rowing, cable rope curl, cable rope triceps extension and most exercises that can be done using the triceps rope. It also works on most machines.

The way it works is pretty simple: you lift the weight (overcoming/concentric portion) using two limbs (both arms if you're doing an upper body exercise, both legs if it's a lower body movement) and you return the weight (yielding/eccentric portion) with one limb.

The overcoming portion should be done as fast as possible while the yielding portion is to be executed in five seconds. Sets of three to five reps per limb are performed (so six to ten total reps per set).

This technique works by doing the overcoming portion of the lift using a compound movement and the yielding portion using an isolation movement. The two best examples are the power clean/reverse curl (lift the bar as a power clean and lower it as a reverse curl) and the close-grip bench press/nose-breaker (lift the bar as a close grip bench and lower it as a nose-breaker or triceps extension). I've provided some photos of this further down.

Using this technique will allow you once again to use a very heavy load in the yielding portion of the movement, thus placing a super-adaptive stimulation on your muscles and nervous system. I find that doing three to five reps work best with this type of training, too. Here are a few examples of possible movements with which to use this technique:

This technique is fairly simple: using a moderate to heavy load (60-85% of your max) you execute a super slow yielding phase while lifting (overcoming) the bar explosively. The following table gives you the parameters to use depending on the load you select:

This type of accentuated eccentric training is fairly easy to do and can yield impressive muscle size and tendon strength improvements.

"Negatives" basically refer to performing only the yielding portion of an exercise and having spotters lift the bar for you. You should use a load that's between 110 and 130% of your maximum when performing negatives. The time of the action (lowering) depends on the load:

When doing supramaximal negatives you should only do sets of one rep. Anywhere from three to ten singles should be performed in a workout. This type of training places a very serious demand on the nervous system and for that reason you should take relatively long rest intervals when using this technique.

Let's put the above ideas to work! The following program will have you train your upper arms twice per week with at least 72 hours between each workout. Biceps and triceps are done in the same session and no other muscles should be included in these sessions.

This program is a shock program and thus shouldn't be used more than four weeks in a row. However, it can be repeated after using a different program for another four weeks.

Hopefully you now understand how to apply accentuated eccentric training to your program. If you do you'll be rewarded with a faster rate of muscle and strength gains than ever before!

Think of bodybuilding as a language, and think of the exercises we do in the gym as words in that language.
Training
T Nation November 20

If you want to build muscle, you have to turn on your mind-muscle connection. Here are 5 training strategies that do it.
Bodybuilding, Training
Eric Bach March 28 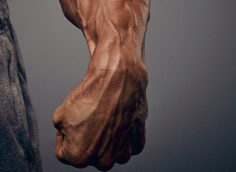 For big, strong, and healthy shoulders, scrape the rack. Here's why and how to do it.
Tips, Training
Christian Thibaudeau January 5