So if back health is your primary goal, your needs are best served staying in neutral when you pull heavy loads. End of that particular discussion.

However, that's not the whole deadlifting story. Most of the world's top conventional deadlifters realize that pulling with a rounded back allows them to hoist greater loads.

This is puzzling to many, and there are countless self-conscious lifters out there who wonder why they're so much stronger with a rounded back. Many automatically assume that their body is somehow dysfunctional if they're stronger when rounded-back deadlifting, and more often than not this simply isn't the case.

I'd go as far as to argue that the vast majority of lifters, even when proficient in the hip hinge and with sound levels of core stability, are stronger when pulling with a rounded back.

The Rounded Back Conundrum

Many lifters find that when the weight creeps over 90% of their 1RM, their back starts to round, and the rounding gets more pronounced as the load approaches true maximal weight. I'm one of these individuals. I wish I could pull heavy loads with a neutral spine, but unfortunately I'm unable to do so.

With what's deemed "perfect form," characterized by maintenance of the natural lordotic and thoracic spinal curvature with the extension revolving around the hip joints, I'm able to pull 425 pounds. If I allow my back to round considerably, I can pull 565 pounds. Why in the world would there be a 140-pound discrepancy between these two variations?

Is the Back the Weak Link in a Deadlift?

Let's assume that grip isn't a limiting factor for deadlifting strength. Some people indeed have a weak grip, but if this is the case, straps can be worn to allow for the lifting of maximal loads. Until around six months ago, I'd have told you that deadlift strength is limited by the strength of the glutes and hamstrings (the hip extensors). However, several things have caused me to change my stance.

Furthermore, I wasn't too impressed with the EMG data for the core muscles (lumbar erector, lower rectus abdominis, and internal and external oblique) during a deadlift when I measured them a while back – another blow to my weak link theory. I'm sure, like everything else in strength training, it depends on the lifter.

Furthermore, the more I learn about the human body, the more I realize that reductionism doesn't always apply, but that's another topic. Now let me discuss why the spine is stronger when flexed.

Why is the Spine Stronger in Flexion?

With a neutral spinal posture, you rely predominantly on the spinal extensor muscles (mostly the erector spinae, also the multifidus and a little bit of quadratus lumborum) to keep your spine in position and maintain the arches. If you're freakishly back strong and you don't have much of an imbalance between hip extensor and back strength, you can pull this off.

However, if you're not freakishly back strong, or if your hips are so damn strong that they overpower what your spinal extensors can stabilize, then the back will have to round.

If you stay arched, here's what "holds the bridge up," or in other words, what keeps the spine in neutral position: 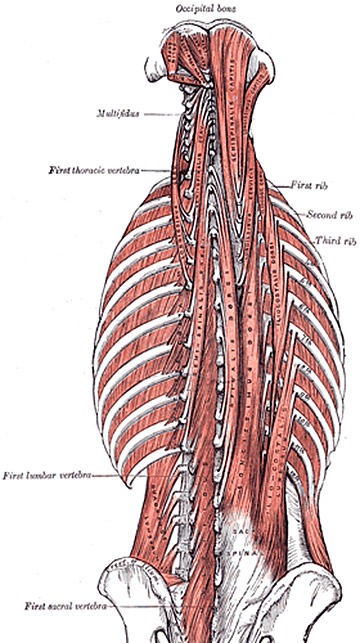 Obviously, the vast majority of support in neutral-spine deadlifting comes from contracting muscles – probably supporting 98% of the tension.

If you round your back, now you get active plus passive support. Sure, the bridge isn't truly "held up" when rounding, but the spine does indeed stabilize in a rounded position. Here are the contributors to the stabilization of a flexed spine:

Still, the majority of contribution in rounded-back deadlifting comes from active muscle contribution, but now you're getting considerable contribution from passive structures and you've got more stabilization through IAP and co-contraction. And this is what allows for the hoisting of heavier loads.

In my case, the factors mentioned above contribute to allowing me to pull 140 more pounds in a conventional deadlift. I'm sure that some of the factors contribute much more heavily than others, but I'm not sure as to the exact proportions.

As mentioned, the safest spinal posture is a neutral position, with no incidents of flexion or hyperextension in any segments. However, studies show that powerlifters flex their spines considerably, but they avoid injury simply because they avoid end-ranges of lumbar flexion.

Furthermore, if you examine where most of the rounding occurs in powerlifters, a vast majority takes place in the upper back (the thoracic spine), and this strategy is safer compared to the other way around (mostly lumbar rounding).

If you choose to go ahead with rounded-back deadlifting, make sure that your lumbar spine doesn't approach end-range flexion.

Let's say that each lumbar segment can flex 13 degrees. Make sure you only go to around 8 degrees or so and keep 5 degrees "in the tank." Just keeping two degrees in the tank (11 degrees of lumbar flexion in a particular motion segment) has been shown to cut the disc stress in half compared to full rounding (13 degrees of lumbar flexion). But even 50% of maximal disc stress is too much – keep 5 degrees in the tank and you'll be much better off.

Of course, it's nearly impossible to consciously control the spine at the segmental level during heavy deadlifting, but just ensure that you "lock up" your lumbar spine plenty shy of full flexion. You can toy around with video-analysis to help you learn what your full lumbar ROM is and then figure out how to stay in the mid-ranges when deadlifting.

As you gain proficiency in rounded-back deadlifting you'll learn to:

This last point is incredibly important. Here's a quote from Konstantin Konstantinovs, one of the world's best deadlifters (he's Latvian and raw deadlifted 939 pounds without a belt):

"That I will break my back I heard from as long as I started to deadlift, or for the last 16 years. I have always deadlifted with a rounded back. My legs have always been lagging in development, but results in deadlift have always been increasing. My back is prone to injuries only when I squat with a heavy weight, but when I deadlift, my back remains in the same rounded position throughout the lift, irrespective of whether I can lift the weight or not, and this protects it from injury. But you need very strong abs if you want to deadlift like that."

Stay between 60-80% of 1RM and make sure your spinal position never breaks down. Avoid taking the sets anywhere close to failure or you'll inevitably end up rounding your back.

This strategy won't beat you up so much, so you'll be able to deadlift more frequently. You can go with a mixture of explosive and controlled reps. For example, 3 x 3 smooth, controlled reps, followed by 5 x 1 explosive singles. You could also do a heavier day (something like 3 x 3-5 with 80% of 1RM) along with a dynamic day (something like 5 x 1 with 60% or 1RM). This is the safest strategy.

Bands and chains may provide a good compromise – the load will be lighter at the bottom of the lift, which is the portion that's most difficult for the spine and hips, but the top of the lift will be heavier. This will allow for good spinal posture throughout the entire ROM while still overloading the system, especially up top as the band or chain tension really kicks in.

You'll need to use considerable band/chain resistance to really off-set the loading curve, such as 50% barbell resistance and 50% band or chain resistance. This practice also allows for a greater percentage of the duration of the lift to be spent in acceleration. This too is a very safe strategy.

Go heavy but pull back on the reigns a little bit with "sub-optimal posture."

Try to use ideal form with warm-up sets. As the weight gets heavier, allow for controlled rounding. Push the sets hard but avoid taking them to failure to avoid hyper-flexion.

Don't ever truly "max out." Only go to 95% of 1RM. This is what I've done for much of my lifting career. I allow the spine to flex, but I control the flexion and don't ever push my sets to complete failure or truly max out. If I did, I'd inevitably end up rounding too far forward and damaging my spine. This is more risky, but can be done successfully if you're consistent and diligent.

Go balls to the wall and accept the risk with "horrible posture."

Throw caution to the wind. Let the spine round as far as need-be. Go to complete failure and lift the heaviest loads possible. If this is the strategy you choose, I can guarantee you that you'll eventually suffer severe injury and have a lifting career hampered by constant pain and injury to show for it. This is the most unsafe option, and unfortunately there are lifters out there who go this route and must learn the hard way to change their ways. Take it from an experienced lifter and avoid this route and live to train another week – if not you'll regret it, mark my words.

Most people are stronger when rounding their back during deadlifts. This is natural and shouldn't be thought of as "dysfunctional." You can choose to stick with lighter loads and deadlift in neutral spinal position, or to roll the dice and allow for some rounding. If you go this route, make sure you build up the awareness and discipline to avoid fully flexing the lumbar spine while lifting heavy loads. 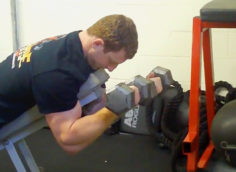 Keep the tension on your biceps high even at the top end-range with this exercise.
Arms, Bodybuilding, Exercise Coaching, Tips
Tony Gentilcore November 8