How’d They Build Those?

Instagram has become its own little microcosm. Within it is a growing community of scantily clad, Insta-famous glute girls. You probably know the type. But despite the ridicule they receive over their continual outpouring of butt photos, they actually know a few things about hypertrophy. And the average lifter would benefit from following along.

You see, the women on social media that become well known for their glute development have had to work for it. The glutes are, in fact, made of muscle. If these ladies can go from being members of team no-ass to literally being Insta-famous for their glutes, then what are they doing that others aren’t?

To get the answers, I investigated. I asked around and did some research. This is how they build their butts, and what we should consider if we want to do the same… with ANY muscle group.

1 – Balance Is Not a Big Deal To Them

Balance is good usually. We’re told we need work-life balance, a balanced budget, and a balanced social life. But when it comes to bringing up lagging muscle groups, balance sucks.

Glute girls take bands with them on vacation and start their morning with glute work. True story. It’s that important to them.

A multi-time Ms. Universe winner once said that she’d do a few hundred straight-legged kickbacks while wearing ankle weights every night, in conjunction with all of her other glute work during the week. She had amazing glutes.

Remember, the body adapts. It doesn’t know if you’re in the gym trying to get sexy for the beach or if you’re doing physical labor. It just responds and adapts appropriately for the degree of work it has to do. If the degree of work is something it currently has the ability to handle, then why would it grow? It won’t.

If you have spaghetti arms do you really think doing a few sets of curls and one-arm triceps extensions once a week is going to build them? The glute girl doesn’t go into the gym and do two sets of hip thrusts once a week with the belief she’s going to build more junk in the trunk.

How many times a week do the glute girls train their butts, and how much work do they put in at each of those training sessions? At minimum, two workouts a week are dedicated to a high volume of glute work. That’s a minimum for all of them. But three times a week was common. 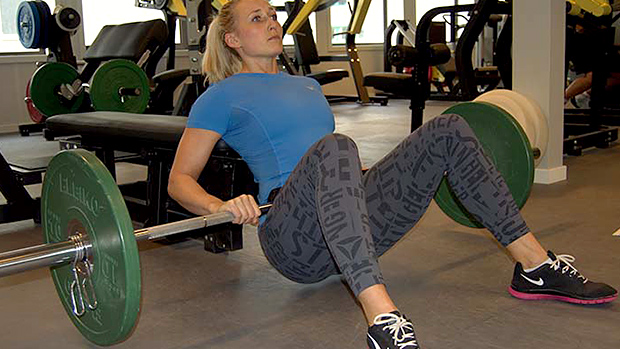 2 – They Use “Other” Training Days Strategically

So twice a week they do glute dominant training sessions with high volume.

On the other days of the week, they do accessory stuff with bands or systemically low-intensity work.

Here’s an interesting point about the “other days” where lower intensities were used with lower volume: those sessions are likely restorative for muscle recovery. If you’ve ever been sore from a lift, then went into the gym the following day and did that movement again, you’d know that the muscle soreness tends to dissipate faster.

Pushing blood and nutrients into a damaged muscle speeds the recovery process. While glute girls are probably doing the extra work just for the sake of it, the lighter, less intensive work helps with recovery too.

If you really want to get a lagging muscle group to grow, hit it early and often. That means a minimum of twice a week, but having weeks of even higher frequencies should be common.

3 – They Use Heavy Basics Sparingly

Few things make me roll my eyes harder than the whole “squat booty” mantra. When I asked, not a single female that’s chimed in on this topic answered “squats” as the key factor for their glute development. Not one.

There. I hope this can die in a grease fire along with the “she squats” memes.

If heavy squats and deadlifts are truly responsible for building impressive glutes, then powerlifting would be chock full of booties so big you’d think Sir Mix A Lot had used the 1992 IPF World Champions as his inspiration for Baby Got Back.

“Well duh, Paul. That’s because one person trained for strength and the other for muscular development.”

How did the girls with great glute development use squats and deadlifts? Moderate to high reps. The lowest saying 5-6 reps for squats, but most of them said squats fell into the 10-12 rep range for 2-3 sets. Those are bodybuilding sets and reps, not powerlifting sets and reps.

The other interesting part was that they didn’t pour their training volume into squats or deadlift variations either. The volume used for those movements was moderate to low. That’s right, they didn’t focus their training around squats and deadlifts.

Focusing on heavy lifting with low reps using compound movements is really a piss-poor way to target a muscle that’s lacking in development. Not only that, but progressive overload has a point of diminishing returns when it comes to muscular development, most especially in the low rep ranges where those abilities are determined largely from a neural standpoint.

4 – They Load Up Appropriately

Glute girls find their sweet spot when it comes to loading – weight that creates a strong contraction of the target muscle group on each rep. They also avoid what I call the “break-over point.”

When you hit the break-over point you’re moving a weight that you can still lift, but you’re no longer feeling the target muscle working. Sure, you’re going heavier, but there’s no mind-muscle connection anymore.

They lift this way for compound movements as well, not just isolation exercises. Once again, progressively heavier weight isn’t the solution that these women arrived at for bringing up a muscle group. 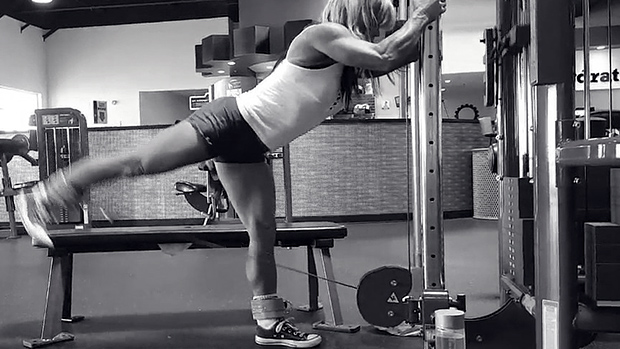 5 – They Emphasize the Mind-Muscle Connection

If you’re trying to bring up a lagging body part, you need to choose exercises where you can actually feel that body part doing the work. Generally speaking, the best movements you can use are the ones that offer the ability to hold a peak isometric contraction. This is how you develop a strong mind-muscle connection.

And it’s mind-muscle connection that they’ve all agreed was what finally did the trick for getting their glutes to grow. How did they develop it? Getting very strong peak contractions over and over again in each workout.

So if you’re wanting to build your traps, it’s not the 700-pound barbell shrugs that’ll get you there. It’ll be the paused dumbbell shrugs with 3-5 second holds on every rep in the top, peak contraction position. The measly dumbbells with strong peak contractions will get you size, not ultra-heavy movements for low reps.

6 – They Work a Muscle From Multiple Angles

Bodybuilders have been saying this for decades: complete development of a muscle requires a myriad of movements. This is another reason squats and deadlifts aren’t enough for most people when it comes to developing glutes.

Lifters tend to get the most tension from a compound exercise in the mid-range portion of a rep. And compound movements disperse a great amount of tension across multiple joints and muscle groups, which is why they’re great at building the overall foundation of muscle. But they often fall short when it comes to full muscular development and aesthetics due to natural tendencies for us to favor and develop stronger muscle groups over a period of time.

On the other hand, there are various isolation exercises that increase tension in either the stretched or peak contraction portion of a rep and can allow us to put the tension right where we want it.

That’s six exercises just for the glutes. And YOU’RE off doing only the bench press to build your bird chest because you read somewhere that “incline press doesn’t really target the upper chest,” and that benching is enough… which is why you’ve got that bird chest. Because for complete development, 99% of the time, one movement will not be enough. Two doesn’t even appear to be enough if we’re talking about prioritizing a weak or small muscle group.

So use exercises that offer up resistance curves at different muscle lengths: midrange, stretch, and contracted.

7 – They Use Progressive Overload Appropriately

There’s a point of diminishing returns when it comes to chasing more weight on the bar for muscular development, but there’s a caveat with that. It mostly applies to lower rep ranges.

Progressive overload is incredibly important for building more muscle mass, but the application of it matters just as much. The Glute Guy himself, Bret Contreras, sent me this chart which gives a great example of that: 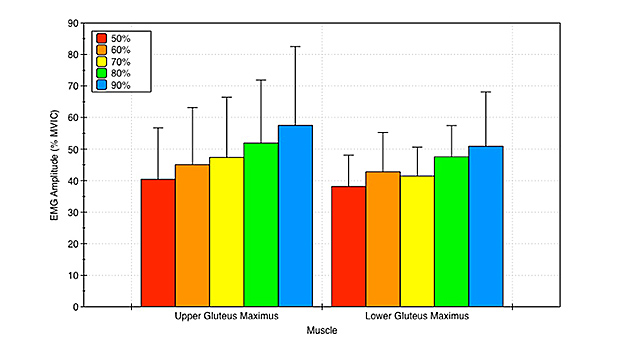 You’ll see that the data Bret collected with the hip thrust shows that at 50% of 1RM on the first rep activates around 40% of maximum voluntary isometric contraction, or MVIC. In contrast, 90% of 1RM activated about 50-60% of MVIC.

When you factor in that most people will be able to do between 15 and 20 reps with 50% of their 1RM, and only around 3 reps with 90% of their 1RM, it shouldn’t be hard to deduct which weight selection will get you the most bang for your buck when it comes to hypertrophy.

The glute girls don’t train for maximal strength. They’re training for maximum development. They mainly use progressive overload in the medium (8-12) to high (15+) rep ranges.

If you’re looking to maximize muscular development then doing triples and sets of 5 with near maximal loading is going to lend itself more towards maximal strength development. Stick to breaking rep PR’s (instead of load PRs) in the medium to high rep ranges.

Even with all of this specialization, the women who went on to develop Insta-famous glutes had to stay at it consistently for a long time. Yet ask a bro, and he’ll tell you that he can’t grow calves because mom and pop didn’t bless him with them.

If you want bigger biceps you’re going to have to put in the marathon type work in order to get the end game to manifest itself. So don’t believe that a few months will be enough. Be prepared to specialize for as long as it takes.