If your posture isn’t up to snuff, it’s like an obese person avoiding gluten to lose weight when he’s consuming 5,000 calories a day. He’s majoring in the minors. Yes, that’s how big a deal posture is. 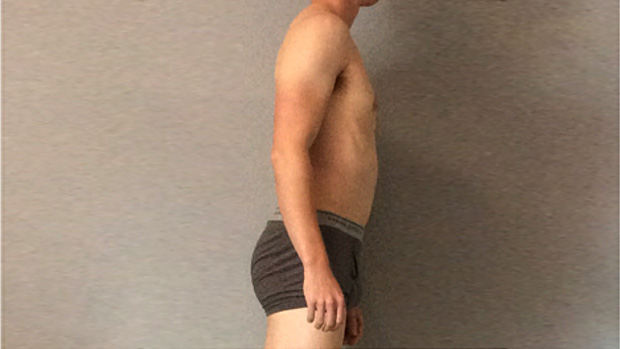 Many lifters have bad posture. It’s called anterior pelvic tilt (APT). It looks something like what you see here. Notice the waistband. The front sits lower than the back because the pelvis is tilted forward.

What Happens With APT

Your abs aren’t doing jack except protruding and looking fatter than they really are. Also, your glutes aren’t going to be able to be stimulated to their fullest because the hip flexors are wound tight, and your lower-back will be locked up.

How can you tell you have APT? Just have someone take a shirtless photo of you from the side. If it looks anything like the photo above – abs out, glutes way back, lower back scrunched up – you need to do some posture work. If you can’t use your abs and glutes effectively, good luck making consistent gains on squats, deadlifts, and the like.

There are six things that you need to re-think in your training and daily life to get out of APT and into a more neutral position.

1 – Pay Attention to Your Ribs

If you live and breathe with your torso in extension, you have to get it out of extension. The quickest way to do this is to think “ribs down” on every single movement you perform, and in day-to-day living. Start right now from your chair. Place one hand on your upper abdomen and exhale through your mouth as you crunch your abs together. Feel that increased engagement? This means you’re activating the parts of your core that have been asleep.

Rib Position on the Deadlift

When you’re in APT, the deadlift set-up is going to look like the left photo here: 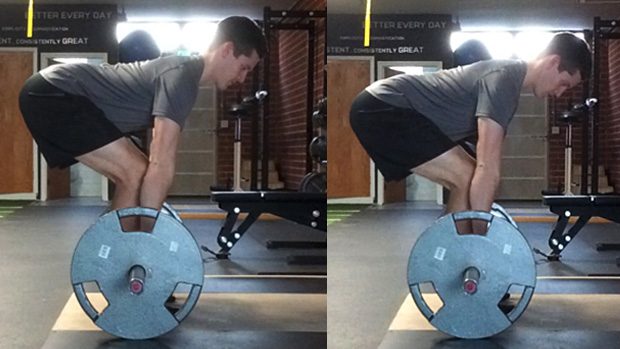 For those who don’t have APT, a slight lordosis (hips tilted in APT) is fine during the deadlift, but when you’re already in a significant lordosis, different rules apply as it will lead to an incorrect finish. The belly button will be the closest thing to the wall and the hips will be nowhere near full extension. Not good. See left photo here: 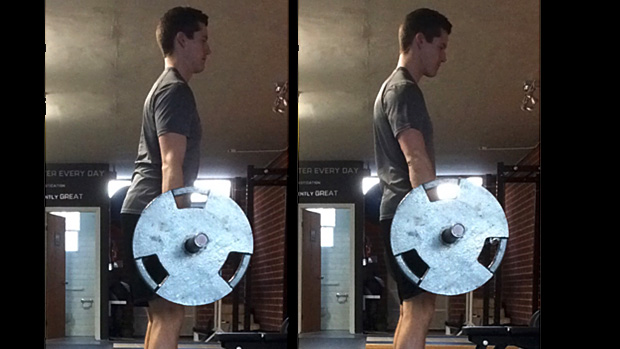 By cueing yourself “ribs down,” you can achieve a more neutral spine (not completely flat) and bring your abs and glutes along for the ride. The finish is going to be much more powerful with the glutes actually putting in work. If you have achieved the proper hip extension, you will feel your hip flexors pressing hard against the bar. To summarize, here are comparison shots of the set-up and finish, so you can see the differences clearly.

Rib Position on the Squat

Keeping the ribs down also influences squat technique. Below we have the typical APT set-up and descent. It starts with a hard arch in the lower-back with the glutes tilted back. 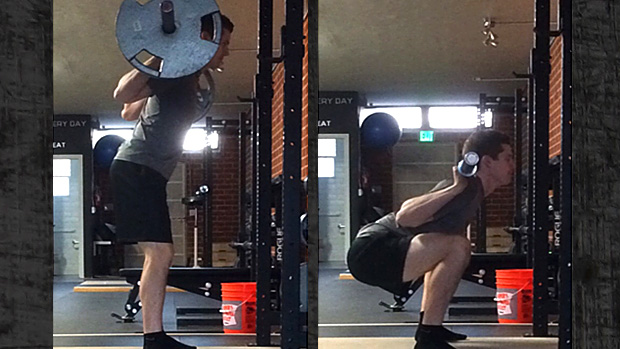 Hip drive out of the bottom is the key to proper squat performance. There’s little chance the glutes will be the initiator getting you back up from that squat. But the low-back sure will be.

Below is a more neutral set-up that will prime you to drive back up with the glutes. 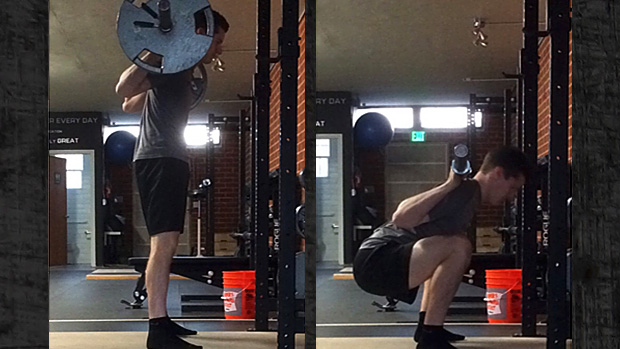 The cue “ribs down” will transform an anterior pelvic tilt and you’ll instantly feel the difference.

While proper breathing patterns are important for any training population, the breath (specifically, the exhale) is incredibly important for those battling APT. When you exhale, the ribs automatically depress. This creates the abdominal engagement you need. A sharp exhale is best done through the mouth as you approach the finish or peak contraction of any movement.

Consider the deadlift. The exhale would begin occurring just before you reached an upright position. This will lead to everything being “set” at the finish with the ribs down and glutes engaged. However, you can’t just give a lazy exhale or even a deep one with big compound movements. It needs to represent the power you’re looking to maximize on each rep, but be just enough that you can quickly begin taking air back in.

Think about blowing up a stability ball. If you take the pump out for a second, you’re going to hear a distinct expulsion of air before you quickly plug it back in the hole. In this case, your body is the ball and you’re unplugging for a second at the top of each rep. This will create a “hiss” sound versus just blowing air out. (Of course, not every movement will require a sharp exhale, like isolation exercises.)

Add tension to the core to bring the ribs down and draw the hips back to a neutral position. For these, exhale through the mouth, but focus on exhaling the entire time through the eccentric, not a sharp exhale. If you haven’t been doing these, get ready to feel your abs in a whole new way.

If you’ve got APT you’ll be heavily extended through the low-back, so the glutes aren’t contributing much. Therefore, the common cue “drive the hips toward the ceiling” can’t be expected to work because your low-back would end up doing the brunt of the work.

Using the hip thrust as an example, the cue needs to be more along the lines of “tilt the hips up and back.” This will get you posteriorly tilting the pelvis at the top and you’ll actually end up feeling the glutes and keeping stress off the low-back.

Think of the point on a wall behind your head while you’re hip thrusting (or doing a glute bridge) and drive your hips toward that point. Below is a photo comparison of a hip thrust that is NOT actually using the glutes versus one that is employing the cues just discussed. 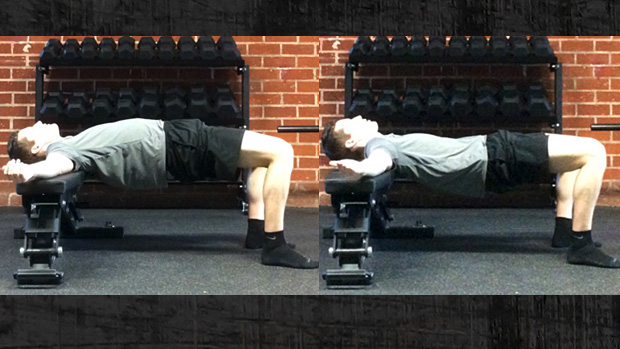 In the left photo, the belly button is the closest thing to the ceiling, employing the spinal erectors much more than the glutes. Compare this to the right photo, where you could draw a straight line from head to knees. That’s what you need to shoot for. 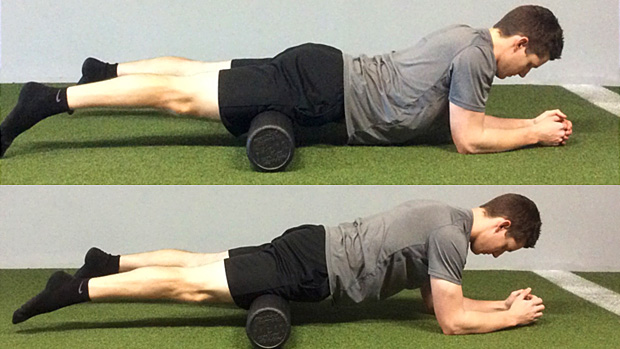 Part of the reason why lifters have a hard time getting out of an APT is because they don’t think about it unless they’re lifting heavy stuff. But it’s the times that seem most innocuous that provide the greatest opportunity for change. For instance, when foam rolling the hip flexors and quads, it’s very easy to let the stomach drop toward the floor (top photo) versus keeping the ribs down (bottom photo).

If you’re standing all day, you may be more susceptible to slipping into APT because maintaining a neutral spine can become tiresome. To combat this, avoid being in the same standing posture for too long. If you’re putting your weight on your right leg, switch your stance to favor your left leg, and then stand evenly on both before going back to your right.

One quality of APT is the tendency to slip into knee hyperextension. But when you’re standing normally, the knees will be active and likely have a slight bend to them. This promotes more of a neutral posture and keeps your knees from bearing a ton of undue stress.

7 – Don’t Sleep on Your Stomach

Those in APT should avoid sleeping on their stomachs. This will only encourage more of an extension-bias and leave you wondering why your back is in pain in the mornings. It’s just not comfortable for the spine to stay locked in a position it’s already too far into to begin with. So sleep on your side or back. It won’t be an easy transition, but it’ll be worth it when you see your posture improve.