It happens when hard training upsets the natural recovery curve and leaves us in a state of fatigue, a feeling like getting hit by a truck. And it can stick around for days. So why does it happen? And what can we do to offset it?

Too much stress can lead to a workout hangover. And while the body needs a healthy level of cortisol production for normal functioning and optimal health, it becomes an issue when cortisol is released in excess as a response to stress, either through life, training, or both.

It’s catabolic. Excess production eats away at lean muscle tissue and may even lower testosterone production. So if your cortisol levels are chronically elevated, you’re not going to be making optimal gains, nor will you feel very spry during that time.

An easy way to judge where you are from a recovery and overall wellbeing standpoint is your libido. Yes, your libido. A high libido is a great overall marker of good health. Testosterone is a key hormone in your sex drive, and obviously in building muscle and recovery. So when your sex drive is lagging, there’s a good chance your T levels are too.

Training “on the nerve” is a phrase from Christian Thibaudeau. It’s the mindset many lifters put themselves in before the lift or set begins. You should limit the number of sets that you need to psyche up for. This does NOT mean a great deal of concentration isn’t involved. It’s the opposite.

However, it’s the parasympathetic nervous system that aids in recovery post training. And of course, training causes stress to that system. This is why when we talk about recovery, it’s important to understand the difference between localized recovery (at the actual muscular level), and recovery at the systemic level (the various nervous systems).

Training on the nerve too often means there’s going to be a significant downward curve of the nervous system. When training is intense, the PNS becomes suppressed and power output diminishes. Despite all the talk about “CNS” recovery, it’s the SNS and PNS that are most involved in training. In order to reduce workout hangover, keep to a minimum the amount of sets you have you have to “psyche up” for.

Your biggest sets shouldn’t have you screaming and yelling all over the place like a madman. The majority of the greatest lifters approach the bar in a Zen-like state of concentration. Sure, there are a few guys that get crazy, but moving your biggest weights should require focus and concentration, not acting like you’re on PCP.

The smallest part of your training year should be spent going heavy. That means using weights in over 90% of your true one-rep max range. The best powerlifting methods in the world generally use volumized sets that fall between the range of 68-72% of the lifter’s one rep max. Yes, it’s that low.

Not only that, there have been a myriad of studies which show that lower intensity loads produce just as much hypertrophy as higher intensity loads, without the negative effects on the recovery curve. So why keep training that heavy when it’s frequency that appears to have the greatest potential in regards to muscle growth?

Lastly, while training brutally hard is absolutely a requirement at times, getting into the gym with consistently “good” workouts will have a bigger payout than killing yourself with one big session a week, which causes all other sessions to be piss poor, or even force you to take more rest days.

If you use them, do so intelligently. You need to stay in touch with what your body is telling you. If your sleep has been on point and your nutrition has been good, and yet you’re feeling wrecked and have workout hangover from the day before, then instead of masking fatigue with stimulants, it’s better to rest.

Allow for systemic recovery. That’s when the growth process is taking place. Being exhausted or suffering from workout hangover is a sign some systemic recovery probably needs to happen for progress to be made. Don’t ignore what your body is telling you during this time.

Keep in mind that stimulants, if used too often, will lose their efficacy and you’ll either have to up the dose or switch to a new one. Some caffeine, a good diet, and proper workout nutrition is enough to get the job done. Let your body be your guide. Don’t mask its messages.

A lot of people don’t understand how to put together their training plans to properly recover. Two arm days, for example, aren’t going to have much of an impact on overall recovery. But two hard and heavy leg sessions are going to be crippling. Maybe not the first or even the second week, but eventually you’ll see it happen. Big leg and back days usually do well with a day off after them. If you’re training legs or back twice a week, you can plan this so that one day is a harder day than the other and still meet your individual recovery needs.

This doesn’t mean that other body parts can’t cause workout hangover. It’s not always just about muscle groups. The volume, intensity, and duration of the session come into play too. One great way to avoid workout hangover is to try and leave the gym feeling better than when you walked in. Chances are when you have those days where you train so hard that you need a wheelchair to leave the gym, some serious workout hangover is going to be in store the next few days. 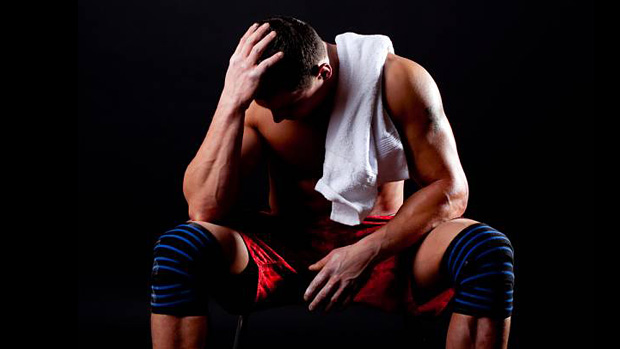 Oxytocin is the “love” hormone. It reduces stress, anxiety, and depression. It’s generally released during hugging or some sort of physical bonding. This doesn’t even have to be with a person. It’s been shown that bonding with your pet can do the same thing.

It’s also experienced more during the first few months of new romantic relationships, especially during the first six months. After that, things tend to go to shit and people suck. So make it a habit to dump someone after six months, then have someone else on the hook ready to go for more oxytocin release. Yes, that’s a joke… sort of. Because becoming single again actually increases testosterone levels. So you can kill two birds with one stone here.

But in all seriousness, put down your bullshit facade of what a tough Viking warrior you are and cuddle with your significant other, be affectionate, pet your dog or cat a lot, and use those times to actually embrace feeling good. This goes a long way in reducing stress and cortisol and making the day a hell of a lot better.

When sleep is going well, your gym time will be better, your body composition will improve at an accelerated rate, and you’ll be able to train harder and more often, without as much fatigue. You also won’t be craving as much crappy food. Mitigating the workout hangover means optimizing the hormones that’ll help you feel your best. You can’t do that without sufficient sleep. Supplement if you need to, turn off the TV early, and take sleep seriously.

Let go of stress and anxiety about work, life, partners, and friendships. Just turn it all off for a while. Find a friend who makes you laugh a lot; watch or read something funny. Make it a point to do this. And instead of ruminating on the things that are troubling you, find some standup comedy to watch.

The gym can either be a stress reliever or a stress enhancer. It all depends on what you’re doing with your time there and what you have control over outside of the gym.

As for whether or not to “go for it” on the big days, that’s entirely up to you. I’ve done both. What I can tell you is this: The whole reason that “great day” arrived in the first place is often because you were doing all the right things to lead up to it. That means you’ve been eating well, sleeping well, training properly, and fitting in all the little details that put you in that position.

So are you willing to throw a monkey wrench into your progression and spend the next few days trying to just get back on track after your workout hangover? Or would you like to simply stick to your program and not go through all that? It’s hard for serious lifters to NOT go balls out when those great days are upon us. But if you stick to your plan, you’ll have more of those great feeling days than workout hangovers.