My last Exercises You've Never Tried article focused on the beach muscles. This installment will focus on leg training, specifically single-leg work, something I think is extremely important for almost any training program.

For some, single-leg work can be an effective way to build lower body size and strength in the presence of certain injuries that may preclude heavy bilateral loading.

For others, it can help build hip and knee stability and resolve imbalances between legs, something we all need to varying degrees.

Whatever the reason, you should at least be doing some of it.

Here are some single-leg variations that can help spice up your training.

I've only been using this exercise for a few months, but it's quickly become one of my favorite single-leg variations.

It can be used in several different ways in your program:

Keep the reps in the 5-10 range, but don't be afraid to load it up and push yourself. With practice, it lends itself well to quite heavy loads.

You still want to be sure to maintain a neutral spine, so don't add weight at the expense of poor form.

If you lack the mobility to start from the floor without rounding your lower back, you can elevate the plates on small risers and work your way down over time.

For an added challenge and/or extra emphasis on the quads, try using "1.5" reps: lower down to the floor, come halfway back up and pause with the bar at or just above knee level, lower down again and come all the way back up. That's one rep. See the video below for an example.

Even with reduced loads, your quads will seriously hate you after a few sets of these, in a good way.

Since writing about single-leg squat, I often get asked, "How can I add load if I don't have a weighted vest?"

I usually advocate holding small dumbbells in your hands and reaching them out in front of you to serve as a counterbalance as you squat down, almost like doing front raises. It may seem counterintuitive, but these weights make the exercise easier, not harder. If you increase the weight of the dumbbells, it does increase the challenge for the legs slightly, but it's not the same.

Holding two 35-pound dumbbells out in front of you isn't the same as wearing a 70-pound weighted vest or holding 70 pounds of weight in tight to your body. It's easier on your legs but much harder on your shoulders – so not only are you shortchanging your legs, but it'll be harder to raise the dumbbells and you'll be far more likely to slouch forward and lose good posture. Not a good tradeoff.

Try this instead (see the video below):

You can also grab a dumbbell in the goblet hold, two kettlebells in the rack position, or even put weights in a backpack, but using a barbell with the front squat grip allows for the greatest loading potential and encourages a more upright posture.

I like to have people stand on a box when they perform single-leg squats to allow the non-working leg to drop down, but I wouldn't recommend doing that with a barbell on your shoulders just in case you lose your balance and have to bail.

I'd also recommend squatting to a parallel box to help serve as a depth gauge and give yourself a security blanket to sit down onto if need be.

Remember to control the eccentric portion of the rep and not just plop down onto the box. You can pause slightly at the bottom or gently tap the box, your choice.

Single-leg Romanian deadlifts (RDLs) are a great exercise for the posterior chain. I was admittedly a slow adopter because I wasn't very good at them and it's much easier to blame the exercise than it is admit your own shortcomings. Once I got over myself and actually took the time to learn the movement, my feelings changed and I really like them now. Funny how that works.

To make them even better, I've been playing around with using ankle weights for the trailing leg, as you can see in the video below.

The ankle weight functions much like holding small dumbbells for single-leg squats.

If the weight is light, it makes the exercise easier by functioning as a counterbalance. It also serves as a good reminder to extend the rear leg up and back rather than let it dangle limply, which is important to maintain a neutral spine and avoid rounding the lower back.

So for lifters struggling to master the form and balance component of the exercise, the ankle weight is more of a teaching tool. For stronger lifters, a heavier ankle weight will also allow you to work the glute of the rear leg, much like the motion you'd see during a single-leg reverse hyper, giving you more bang for your buck.

Start with 2-5 pound weights and go up from there incrementally. A little goes a long way.

I remember one particularly embarrassing time when I was doing trap bar deadlifts. My workout was going along smoothly until I forgot to add a plate to one side of the bar on the way up from 405 to 495, meaning I had four plates on one side and five on the other – only I didn't realize it.

Four ninety-five wasn't my max, but it wasn't a warm up either. I took a vicious rip at it, only to have the side with four plates shoot up and the other side stay glued down to the floor. Long story short, I lost my balance and fell backwards just as the weights slammed down loud enough to draw everyone's attention.

Luckily I was fine – other than a bruised ego and feeling like a complete tool – but it definitely wasn't one of my prouder moments.

While I probably should've just kept that story to myself to uphold some semblance of dignity, it's loosely related to the next exercise: offset single-leg RDLs.

This is a single-leg RDL with the bar intentionally loaded slightly heavier on the contralateral side to the leg being worked. So if you're working the left leg, the right side of the bar would have a little more weight on it. Check out the video below:

The idea here is similar to holding a single dumbbell in the opposite hand, but it allows for a greater loading capacity.

Unbalanced loading is great because it increases the core demand and forces you to use your hip abductors and external rotators to counteract the weight pulling you into adduction and internal rotation.

Given my history of lower back issues, I've never been able to justify doing heavy good mornings. I don't think it's a bad exercise, it's just not for me.

That said, single-leg good mornings are an entirely different animal, mainly because the loads pale in comparison to the bilateral version.

These are a great progression from single-leg RDLs. With single-leg RDLs, there's a tendency to overreach your arms towards the ground, which can cause you to lose your posture and round your back. With a good morning, you're forced to keep your upper back tight to support the bar, thus ensuring good posture throughout.

The key is to treat the movement just like an RDL: hinge at the hips, chest up, weight on the heels, vertical shin, etc. The back leg should also extend straight back such that you feel the glute of the rear leg contracting.

If you feel this one in your lower back, you're probably doing it wrong. You should feel a stretch in your hamstring as you descend, followed by a strong glute contraction at the top.

Wait until you can handle at least 95 pounds with single-leg RDLs before starting with an empty 45-pound bar.

If you think that's too light to be worth your while, try it first before you write it off. I have a feeling your glutes and hamstrings will beg to differ.

This exercise combines the benefits of both forward and reverse lunges.

It's a single-leg exercise that works both legs. Start by doing a reverse lunge as you normally would, only rather than returning to the usual starting position, propel yourself forward right into a forward lunge without letting your foot hit the ground. From there, push back forcefully into a reverse lunge and repeat for the desired amount of reps. See the video below.

This exercise is more about developing rhythm, stability, balance, and coordination than it is about brute strength, so don't worry too much about the weight. For some perspective, I use less than half of what I'd use for either forward lunges or reverse lunges respectively.

Additionally, they could be used un-weighted with the hands behind the head as part of a dynamic warm up or in a metabolic circuit.

This one is more of a total body exercise than a strict leg exercise, but it still fits the single-leg criteria enough to warrant mention.

Check it out below:

Combination exercises are not meant to build maximum strength, and in this case, the amount of weight you'll be able to use will be limited by how much you can press, not your legs. So as a pure leg exercise, it's not a great choice.

Still, it works well as an assistance exercise later in the workout, or like step-through lunges, as part of a metabolic circuit to jack your heart rate up. It also builds core stability through anti-extension, anti-rotation, and anti-lateral flexion.

I like it because it teaches body control and gets everything working together in sync. To that end, I prefer to do the reps more dynamically with a focus on being explosive with both the lunge and the press.

As an added perk, most will find this one to be easy on the joints. Reverse lunges are more knee-friendly than forward lunges because there's not much deceleration involved, and angled barbell presses are typically more shoulder-friendly than a strict overhead press, both because of the angle and because it also allows for a neutral grip.

I'm always a little wary about writing these articles because I don't want you running off and overhauling your whole program and forgetting about the basics. The exercises here are meant to augment the basics, not replace them. Don't forget that.

At the same time, the longer you've been training, the easier it is to get stale. If that's you, I hope I've given you a few ideas to get the juices flowing again. 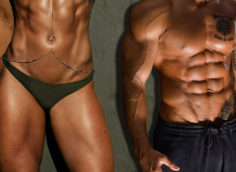 Got an ugly squat? It could be your ankle mobility. Here's how to test it.
Exercise Coaching, Mobility, Tips
Dr John Rusin October 2 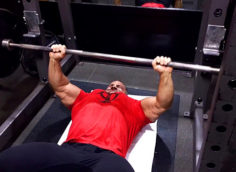 Ditch the bench for a while and try these three exercises to increase lockout strength and blow up your triceps.
Bench Press, Chest, Tips, Training
Jason Brown October 30