In 2017, while playing basketball, I experienced one of the worst knee injuries you can get: a bilateral patellar tendon rupture. That's a full separation of the patellar tendon on both knees at the same time. The silver lining has been plenty of insight on what really makes knee joints happy and what doesn't. Here are six lessons this injury has taught me, and what you should know in order to avoid having the same thing happen to you.

The hamstrings are big knee stabilizers that don't get enough credit since it's the quads that are directly attached to the kneecap, not the hammies. We're constantly thinking about the muscles on the front of the thigh and don't realize that healthy and strong antagonists can create more range of motion, more stability, and make the reps you do of a given compound exercise much smoother.

Whether you're injured or not, "breaking the rules" and putting squats second in line after a few sets of hamstring curls, reverse hypers, or horizontal back extensions can do your lower body good.

You don't have to go heavy either. The goal is to get plenty of blood flow back there, so chasing a pump via higher reps and moderate-to-low weight would be the smart route.

John Meadows talks about healthy lifters pre-exhausting hamstrings before squatting for basically the same reasons, namely sturdier bottom positions for the squat and a welcome change to quad dominance.

The adductors, gracilis, and sartorius muscles all run along the inside portion of the thigh. In the presence of knee injury or dysfunction, many of these muscles can become overactive or tight and ultimately act on the knee joint in an unfavorable way that can add to the problem.

In my case, my quads were quite literally disconnected. This led to my sartorius muscle getting extremely overworked and literally taking over for my vastus medialis oblique (VMO). This led to swelling and overly tight flexion. This is a problem because to be healthy, there has to be a relative balance of strength and stability on both sides of the load-bearing joint.

That means if the inner thigh muscles are just plain tight or weak, it'll almost assuredly manifest itself in joint pain on one of the lateral or medial borders of the patella.

It won't be easy or comfortable, but doing some soft tissue work on the adductors can bring their functionality up a whole lot. Make sure to stretch these muscle groups after working on them so they'll actually respond to stretching.

Don't think we can just get away with addressing tightness and not weakness, though. Keep things simple to start. Do more single-leg work and change up your deadlift stance from conventional to a medium sumo.

The quads and hips are often sold as a pair in the world of training. One important takeaway from that is to remember that the hinge joint in question is usually "prisoner" to the ball and socket joint above it.

Bad elbows usually come from incapable shoulders, and cranky knees are often a product of hip flexors that aren't in the greatest condition. Since the hip flexors – especially the psoas – attach on the spine, they serve a dual role in dictating the health of both the knees and the lower back.

Since most of us live in hip flexion (sitting on our butts), chances are our hip flexors could use an upgrade in tissue quality, which means lacrosse ball rolling, quad rolling, and half-kneeling stretches. They can go a long way in improving the general environment of the thigh and knee.

Again, very simple changes to your warm-up and pre-workout mobility routine may do just the trick. Spiderman walks with thoracic rotation are worth their weight in gold for creating a hip stretch from more than one angle, and the trick is to not just go through the motions.

As far as your workouts, add the half-kneeling position by doing contra-laterally loaded movements. The landmine press is the perfect formula.

Squeezing the glute on the trailing leg can deepen the stretch, making the abs co-contract on the opposing side for stability.

If you're on team "bad knees" there are few ways to target your quads without unleashing a world of pain. Some lifters feel they need to push through it and force-feed a commonly accepted "good" exercise in the name of rehab.

The truth is, you may be beating a dead horse because that exercise doesn't know the nature of your issues, your leverages, and just plain what works for your body and what doesn't.

In the case of the leg press, you may be starting the lift in a hips-flexed position, which many Poindexter trainers frown upon. The benefit is that the machine forces you to go through a passive knee flexion and deep hip flexion instead of an active one, and you're doing so with fewer stress-forces on the spine. That's why most immobile lifters can leg press deeper than they can squat. Those with restricted knees can use this to their advantage.

Through my rehab, I lived on the leg press machine. When I couldn't achieve more than 90 degrees of flexion at both of my knee joints, the leg press cradle did a fantastic job of gently pushing me down into a greater flexion, which allowed me to better access my quads for training.

Additionally, a healthy lifter who's still concerned with his knees can easily change the stance to single leg, duck-footed, wide stance, and back to conventional to target the quads differently.

So if you're looking for a great lower body workout without as much knee stress, it's hard to find a better substitute than the leg press.

The eccentric or negative phase of any lift is almost always more important than the concentric or lifting phase, at least as far as injury prevention and safety are concerned. The faster you lower the weight, the more rapidly and strongly you have to contract the working muscle to make that weight change direction for the concentric half of your lift.

That's why you don't see world-class powerlifters lower a 700-pound bench press bar at anything more than a snail's pace before receiving the "press" cue from the judge. If they did anything different, they'd get pinned.

Eccentric training is a vehicle to safety, and you should use it. The bonus is, you can lower more than you can lift in almost every situation. This is a way to go "heavier" while you're injured, or a way for an otherwise healthy lifter with some chronic knee pain to build a stronger foundation.

It's harder to isolate eccentric-only training for the lower body, but all it takes is a little creativity. For instance, you can use two legs to push up the leg press platform and then lower it using one leg. Here's Christian Thibaudeau coaching it:

You can do the same with the hamstring curl or leg extension – two legs to lift the lever arm and one leg to lower it.

If you want to stick with the conventional versions of big lifts, that's fine. Just do yourself this one solid: Instead of modifying your setup, modify the placement of the weight. You'll see an instant change in just how many stress forces the movements place on the knee joints, especially if you're a taller lifter.

Using an axial load generally adds to knee stress, and using an appendicular load usually results in less knee stress by comparison. In other words, doing split squats with a barbell loaded on the back can be a little more trying than having dumbbells equaling the same weight in the hands.

Beyond that, even using axial loads that place the actual "weighted portion" closer to the hips can do the same thing, which is part of what makes a cambered bar squat so popular.

Changing the actual force angle can be an invaluable factor in making a lift more friendly to your joints. For example, use a landmine setup for squats, deadlifts, and reverse lunges.

Each of these allows your shins to stay vertical while working with a slightly arcing force curve that can do wonders for reducing knee stress. It's another reason why the leg press works well for this issue.

In the case of deadlifts, switching to pull-throughs (above) to ingrain patterning and negate gravitational load can also be a temporary knee saver due to using a novel horizontal force angle. 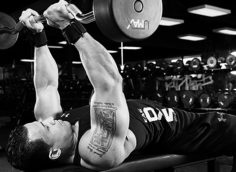 The hang snatch is one of the best explosive power movements. Here's a quick breakdown.
Exercise Coaching, Tips, Weightlifting
Wil Fleming May 22