Strength is a seductive temptress and I have no shame in proclaiming my love for her. But like anything in life that gets your juices flowing, to truly understand strength you must consider both the stuff you like and the stuff you don’t like.

1 – The Best Thing About Strength

The best thing about strength – in my opinion of course – is that anyone can improve from their starting level of strength. I’m not suggesting that everyone is capable of becoming a world record holder, but everyone can get better.

You might start out struggling to bench the bar and then a year later be using 150 pounds – not fantastic but still a lot better than where you started.

Being strong is an inherently relative concept. The good news (which I say with tongue planted firmly in cheek) is that as the general fitness level of the average person declines, it actually becomes easier to set oneself apart and become that much stronger than average.

Train several hours a week or more, train hard, incorporate the main lifts, follow progressive overload, stick with it for an extended period of time (measured in years, not months), and you’ll get significantly stronger than when you started, not to mention a hell of a lot stronger than a “normal” person. In addition, as the strength comes, so do all the health benefits that accompany it.

2 – The Worst Thing About Strength

The worst thing about strength – in my opinion – is that strength is specific, not general. Most people think strength is a single, all-encompassing quality, i.e., a person is strong or not.

An example of this line of thinking would be the comic book character The Hulk. The Hulk is super strong, which means he can do anything that’s related to strength – pick up cars, throw tanks, cause earthquakes by smashing the ground, even fly because he can jump super high. Hell, his muscles are so strong that bullets simply bounce off him.

Unfortunately it doesn’t work that way, as there’s no single “strength quality.” If there were, then the world champion arm wrestler, powerlifter, weight lifter, shot putter, and the World’s Strongest Man would all be the same person. But it’s not, nor has ever been the same person. Fact is, nobody’s ever been on top in even two of those categories, except for the immortal Bill Kazmaier.

The reason for this all relates to the principle of specificity. Muscles don’t function independently of the nervous system, and for every movement we need a motor pattern. In order to operate at very high levels, this motor pattern must be trained regularly. If it isn’t, an individual may not be able to use the strength they’ve developed in one context in another, unrelated one.

In the classic Supertraining, Siff states that strength should not be viewed as “the ability to produce force by the action of the muscles,” but instead that “strength is highly context dependent” and “can manifest itself into many forms.”

To be clear, I’m not saying that there’s never a relationship between strength in one activity and strength in another; what I am saying is that it’s more of a tenuous relationship than one might assume.

If two activities are very similar – for example, deadlifting and picking up the back end of truck – there’s likely considerable transfer, but bench pressing and punching through bricks might not be as related.

Strength is specific and not general, and therefore we can’t simply rank people on something as broad as “strength” and accurately predict how they’ll perform in all settings.

3 – The Best Thing About Strength that Gets the Least Attention

Strength is easy to measure if you accept the common standards of testing it, such as seeing how much weight can be lifted with a barbell. This is an invaluable though often overlooked attribute – because strength can be easily measured, every set and rep gives the lifter precise, instant feedback.

Consistent practice with a focus on self-improvement is the key to mastery of any skill. Strength training brings that idea home like nothing else.

Imagine if an expert sat behind you as you typed up a paper, and after every paragraph gave you feedback about what was good and what was bad. Initially it might drive you crazy, but because she had expertise in the subject, the feedback would ultimately make you more confident in what you were writing about.

Nowhere else in life do we get such constant, clear feedback as at the gym, and this goes a long way towards building confidence and boosting self esteem. It’s very empowering to see yourself succeed at something challenging as a result of your hard work, and I believe that all those positives can be traced back to the fact that strength is easy to measure. 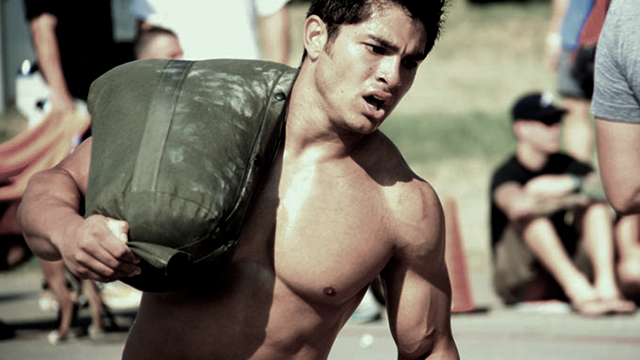 4 – The Thing You Might Not Have Known About Strength

For a single, all-out effort, assuming accuracy and injury are taken into consideration, it’s likely impossible to be too strong. However, for other activities, particularly where endurance is a component, one can be too strong for the activity.

A few years ago I was helping my brother move. He’d boxed up everything and packed it into a U-haul truck and drove to his new place, and then I unloaded everything for him.

Let’s assume we both did the same amount of work (i.e., we each moved the same number of boxes and the boxes weighed the same). My brother is moderately fit but not strong, certainly not by powerlifter standards – I would estimate he could deadlift 350 as his 1RM. To keep it simple, let’s say that I’m twice as strong as he is, at least in the deadlift.

So there I am, unloading the truck and moving 120 boxes into the house and I started getting tired. More specifically, it was my erectors that were getting tired. How could this be possible if I was twice as strong as him? How could he do the same amount of work without much problem?

Each muscle has a certain number of motor units (a motor nerve and their accompanying muscle fibers) in it. Each motor unit can generate some level of force. Let’s say for simplicity’s sake that we both had 100 motor units in our erectors. Keep in mind that one benefit of training is the trainee learns how to better contract, or turn on, the tougher-to-fire motor units (type IIB), which generate the most strength. Also remember that the boxes didn’t have weights labeled on them, and when moving objects of unknown weight one typically over-contracts to make sure their muscle force overcomes the resistance.

When my brother was loading up the boxes he may have contracted half or fewer of his motor units, and he was likely hitting mainly the slow twitch ones with just a few fast twitch thrown in. These motor units don’t generate much fatigue and these boxes weren’t super heavy – most were likely less than 50 pounds – so a huge level of strength wasn’t required to lift them.

I theorized that I’d be more likely to stimulate the bigger type II motor units, which generate more force but also produce more waste products when they contract. Each individual box likely felt a bit easier to me but rep after rep, my erectors were over-contracting, using too much force per motor unit to get the job done, which ultimately led to the feeling of fatigue.

So in essence, I believe one can be too strong for certain tasks, especially in relatively low resistance, endurance type activities.

5 – The Thing You Kind of Know About Strength

Joint health is extremely important to strength. The body has sensors and proprioceptors throughout its framework to tell it what’s going on. Joint stability and joint integrity is a very important concept for the body. If your joint is in pain, the body will turn off (deactivate) parts of the agonist muscles that cross the joint and produce the movement.

The body does this because the lower levels of force represent a reduced chance of injury to the already fragile joint. This is why, in my opinion, it’s generally not advisable to train through joint pain. Even if you’re tough enough to do it, you’re using less of your muscle so you’ll get compromised results – this is ignoring the fact that the pain is a warning something is wrong and further work might really mess up the joint.

While many factors affect joint health, a big one is joint stability. This is a reason why lifting aids like a belt or a bench shirt have become popular – the belt adds to the stability of the joint by externally stabilizing it. This allows the muscles that cross the joint to contract more strongly (recruiting more motor units) and thus more weight is lifted or more force generated.

Bodyweight has a huge impact on strength. Some exercises are more affected by bodyweight than others, such as the bench press, military press, and squat. It’s not just how much actual muscle or lean mass you have, but simply total bodyweight.

This ties in closely with the point made above. One of the ways to boost joint stability (and thus increase the muscles ability to contract) is to gain weight.

As you gain weight (10 pounds is usually enough to notice a bit of a difference) your surrounding tissues (even if it’s extra fat) will buffer and support the joint, similar in the way that an external wrap would cover and help the joint. This increases stability and in turn increases strength (relative strength may or may not increase, absolute strength almost assuredly will).

I’m not advocating you gain 50 pounds of fat so your bench goes up 10 pounds, but I am suggesting that if you’ve been at a plateau for quite some time (both with your strength and your bodyweight), you might think about allowing yourself to gain weight to see if that allows your strength to increase noticeably.

That increase in turn, tends to make the training more fun, your enthusiasm is renewed, and you always have the option of losing that weight later on and seeing what happens to you.

Take a look at the line-up from the World’s Strongest Man competition. None of them look ready to step onto a bodybuilding stage, but they all look like they’re ready to dominate some serious weight, and that extra bodyweight is increasing their joint stability.

It’s Time For Strength To Shine

There you are my friends, 6 interesting tidbits about strength. Some may seem more obvious than others but I’d argue they’re all important. Which points do you agree with or disagree with? Which one’s are new to you? Have you any points of your own?

That’s what the Live Spill is for. See you there.