Not Just For Powerlifters

Most of the deadlift info out there has a powerlifting bias, meaning it's for competitive lifters. The problem? Not everyone is training for a powerlifting meet.

Athletes deadlift to be stronger for their sport. Bodybuilders do it to build muscle. Regular people deadlift to look good and for general strength and fitness.

For them, the deadlift is simply an exercise; it's a tool to help them achieve their goals. To powerlifters, the deadlift isn't a tool; it's an event – it's the end itself.

So let's talk about deadlifts and deadlift variations as they relate to those of you who aren't in the gym to be competitive powerlifters.

When I'm training the average client, I don't use traditional-style barbell deadlifts with a low starting hip position. The go-to move is instead Romanian deadlifts (RDLs) because the lever arm is much shorter.

Compare the distance between the two lines in each deadlift style below. Because it's shorter, it's also safer. 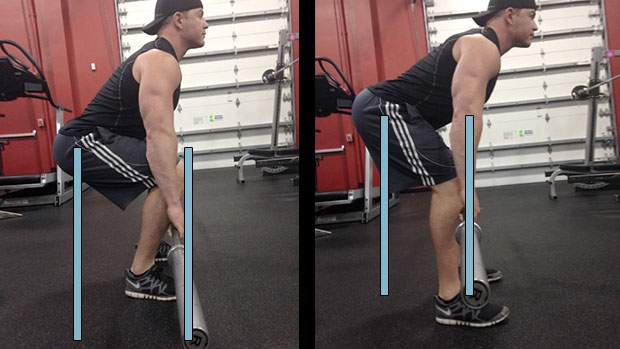 Now, if you're all fired up and ready to argue that I'm a dope for telling people that they "shouldn't be doing" traditional style deadlifts because they're "bad," you're right! The trouble is, I never said that.

It's just that these styles are inherently safer and better for the person who doesn't see the deadlift as an end in itself.

2 – A Common Romanian Deadlift Mistake and a Quick Fix

One of the common mistakes lifters make when performing Romanian deadlifts is that they create more extension than desired in their lower backs, which reduces the amount of hip extension involvement.

Remember, it's a hip hinge movement – the extension should come from the hips instead of the lower back.

Here's what this common mistake looks like, along with a simple technique fix:

Deadlifting with an enhanced grip – using a fat, 2-inch diameter bar or those rubber grip devices you place over a bar – obviously limits the weight you can use because you're limited by what your grip strength can handle.

This can be used as an advantage for beginners who are just establishing a training base and who've just started to use deadlifts. Similarly, fat bar deads break bad habits in those that were previously performing deadlifts in a less-than-safe manner. 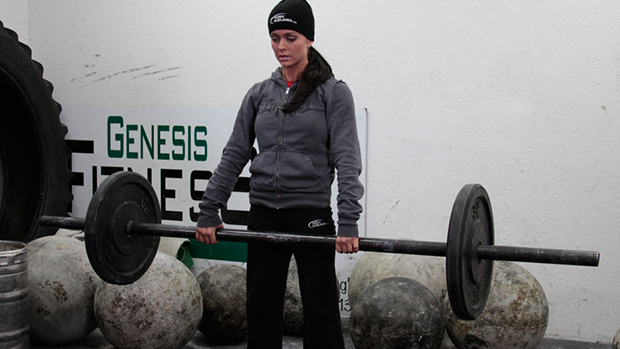 In both those instances, the emphasis switches to the way they're lifting the load, not the amount of weight they're lifting. By starting off using a fat bar, we've limited the load that can be used, and therefore ensure that the emphasis is on refining safe lifting habits while they also build up their training base.

The use of fat bars or fat-bar grips also brings up grip strength, so that when we move from a base phase to heavier strength phase, the grip isn't as much of a limiting factor anymore.

For those who already have a broad training base, mix up fat-bar deadlifts with regular bar deadlifts. Use the fat bar for lighter, repetitive effort sets. For lower rep or max effort deadlift sets, go with the normal bar.

Contrast training can build strength, size, and power. It involves starting with a heavy lift and immediately following it with an unloaded explosive exercise using the same or similar movement pattern.

One of the best ways to apply contrast training to deadlifts is to begin with heavy lifts using a barbell or trap bar and contrast it with a medicine ball reverse-scoop toss.

Another good way to use this method is to contrast loaded deadlifts with kettlebell swings.

To perform a basic 7/4/7 set, start with 7 reps using a moderate weight. Without resting, increase the load and bang out 4 reps. Finish the set by doing another 7 reps using a lighter weight.

For deadlifts, this hybrid 7/4/7 protocol is best:

The 7/4/7 protocol has three functions:

Near the end of a comprehensive lower-body workout, add the dumbbell squat + RDL combo:

Perform the dumbbell squat/RDL combo for sets of 10-15 reps (remember: that's 10-15 of each movement) Use lifting straps here because the grip often wants to give out before the reps are complete.

If you're into single-leg training, combine a Bulgarian split squat and a rear-foot elevated one-leg RDL.

They're still your favorite exercises, just tweaked a bit to make them that much more painful - and productive.
Bodybuilding, Training
Dan Trink February 1

Build and strengthen your hammies with the braced variation of this exercise. Here's how.
Tips, Training
Bret Contreras April 11

Tom Furman unearths and revitalizes an old forgotten technique to extend sets. Remember not to kill the messenger when the paralyzing pain hits you.
Training
Tom Furman March 22