When it comes to training the biceps, simply doing more sets and reps won't cut it. The problem? Most lifters are hitting the SAME parts of the biceps over and over again while completely leaving out (or at least under-stimulating) other parts.

To gain strength and grow, you need to attack the biceps with a smarter method. That means you have to hit both the long and short head of the biceps brachii as well as the brachialis – the muscle that runs along the outside of your upper arm. These exercises leave no muscle fiber untouched. 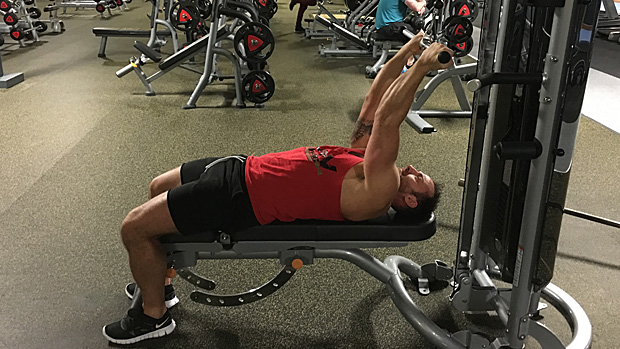 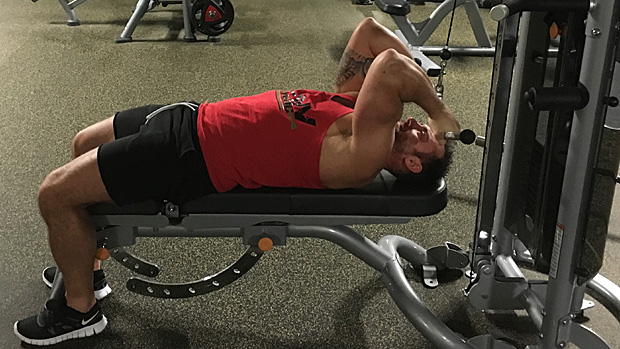 This exercise hits both heads of the biceps. Generally, biceps exercises are set up so the upper arms remain roughly parallel to the torso and the resistance reduces as the hands get closer to the chest. But the guillotine curl requires the upper arms to be positioned perpendicular to the torso with the shoulders flexed (arms forward with respect to the torso). That makes the resistance grow stronger – instead of lessening – as the cable moves downwards toward the body. Hold and squeeze the biceps at the peak contraction for two seconds.

The angle of the preacher bench puts the arm in a forward arm flexion position, which places an emphasis on biceps brachii. As such, the brachialis is active throughout the exercise. Preacher curls are much harder to complete than standing curls and place stress on the muscle at both ends and throughout the entire range of movement. Also, they prevent you from pulling your arms into extension to gain additional assistance from the long head of the biceps or assistance from the delts. 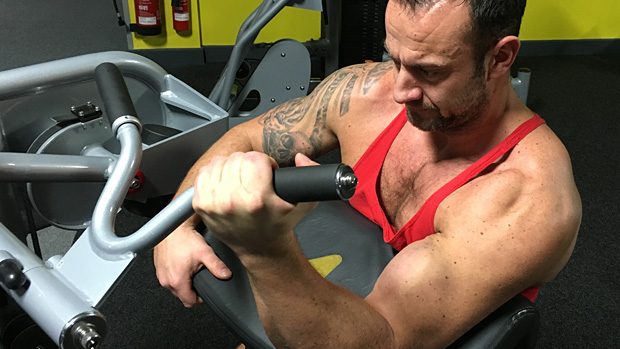 The benefit of using a machine is that it allows you to use your non-working arm to assist with the concentric or lifting phase. Give your working arm an assist and curl a heavier weight than you'd normally use, then do a slow negative without assistance.

Spider curls hit the short head of the biceps. The big advantage of spider curls over the preacher curls is the constant tension, especially at the top portion of the movement. The slow negatives allow more time under tension during the eccentric or lowering phase, where we can handle more load. The great thing about this is it allows you to work out at a higher intensity, and higher intensity means greater stress, which means greater adaptation.

Here's an additional twist: use a fat grip. One of the benefits of thick bar training is that thicker handles stimulate much more muscle activation in the hands, forearms, upper arms, and even the whole upper body. More muscle activation means much bigger muscle and strength gains. 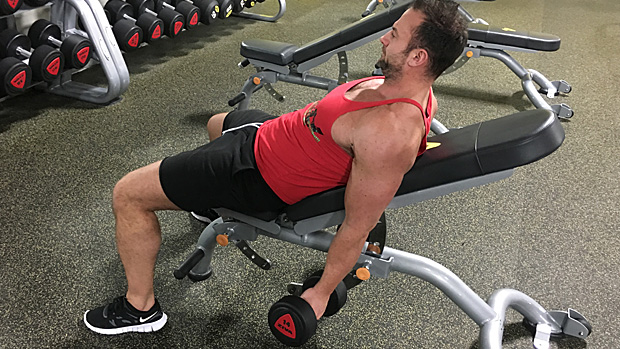 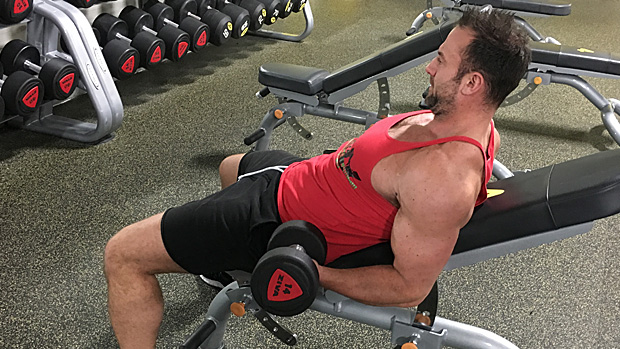 Set the bench at an angle and select a weight slightly lighter than you'd use for normal curls. Let the arms hang straight down. It's important to keep the arms close to the bench with the elbows pointing down towards the floor. Don't attempt to get the dumbbells all the way up to the shoulder, a common mistake with this exercise.

When curling with the dumbbell, have the arms in a supinated position during the concentric and eccentric phase (turn your palm towards the ceiling). To heighten this effect further, squeeze the dumbbell handle with the little finger.

Additionally, try sliding your hand to the outside of the dumbbell handle on at least one of the sets. This will slightly increase the weight on the inside part of the weight and really force you to squeeze the little finger in a supinated position. 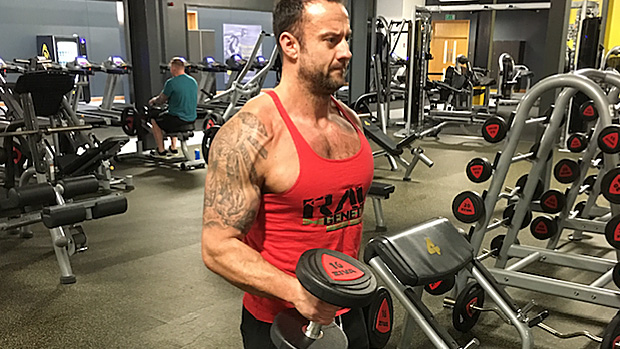 Hammer curls work both the biceps brachii and the brachialis. As you curl the dumbbells up, lock your elbows at your sides and don't allow them to travel forward. This will ensure that the front delts don't take over. You may not be able to bring the dumbbells up as high, but the emphasis on the biceps will be even greater.

Here's how to be the strongest person in your gym. The catch? You'll also have to be smart about your training. Follow these rules.
Powerlifting & Strength, Training
Paul Carter October 26

Stuck with only a straight bar to use in gym? Try these training tricks.
Back, Pull-Up, Tips, Training
John Paul Catanzaro March 30