What's the first exercise that gets wiped from your training program when your shoulders get cranky? The bench press. The bench gets blamed for everything these days, from predisposing shoulder injuries to creating dysfunctional athletes. Aimlessly pushing through pain on the bench isn't smart, but dropping it altogether to "heal up" is a more costly mistake. Here are five techniques to keep you on track for shoulder recovery while allowing you to keep your Monday bro-date on the bench.

Though the incidence of shoulder pain is very specific to the individual, the lifting population has become notorious for anteriorly directed shoulder pain. One problem that both general and specific anterior shoulder pain have in common is the "feels like shit" effect that lifters get. It happens when the head of the humerus is pushed too far forward in the glenoid fossa.

This position is exacerbated at terminal horizontal abduction, elevation, and external rotation, which are all components of traditional bench press variations. This can be largely avoided by using any variation of squeeze presses, even when managing some nagging shoulder pain.

Use dumbbells and squeeze them together as hard as you can throughout the concentric (lifting) and eccentric (lowering) portions. You'll get a legit training effect without flaring up your shoulders. By forcing your shoulders and deep humeral and scapular stabilizers to initiate tension into internal rotation and depression, the head of the humerus will translate more posteriorly and will be more centrated in the shoulder socket.

This positioning allows you to use internal tension and torque production through the shoulders and still train hard. Start off with the dumbbell hex-press variation of the squeeze press and progress into more incline on the adjustable bench.

2 – Do the Bench Press with a Slight Incline

To make the bench press more shoulder friendly, ditch the decline and flat setups and use a slight incline. A slight incline is defined as anywhere from a 10-30 degree inclination of the bench. This is approximately one notch up on the standard adjustable bench. Don't have anything but a flat bench? No problem, just slide a plate or two under the head of the bench.

Why does that make a difference? Largely, the traditional flat bench press has turned into a semi-decline once the shoulder is placed on the bench with the addition of a lumbar arching. Many lifters have this pattern ingrained, which is fine if you know how to manipulate other variables that help long-term shoulder health. Essentially, we're placing the shoulder back into a neutral position by slightly inclining the bench with the presence of an arch.

As a press is executed from more of a declined angle, the movement tends to close down the anterior shoulder compartment which is home to important contractile tissues such as rotator cuff muscles, the long head of the biceps, and a multitude of vascular structures and nerve bundles. The less open area there is for these structures to freely glide through, the more likely the movement will flare something up and cause pain. Our goal is to open up this compartment as much as possible.

Though the slight incline setup can be used with any tool such as a barbell or smith machine, start out with dumbbells to allow as many degrees of freedom as possible for increased long term progression.

3 – Use a Semi-Neutral Grip

Hand position and the use of strategic grip can set the stage for a more effective and pain-free static and dynamic shoulder position, especially in pressing variations. A neutral grip (palms face one another) places the shoulders in a safer position for both upper body pressing and pulling. What we sometimes forget is that hand positions aren't as black and white as a traditional pronated grip vs. a neutral grip. Sometimes, the best position is somewhere in the middle.

Due to every person having unique anthropometry, there's never going to be a cookie-cutter hand position for pressing that will take all the pain away for 100% of the population. But the majority of lifters fall somewhere between a neutral grip and a semi-pronated grip. Finding the exact hand position that feels best for you is important, and a few degrees of pronation or supination of the hands can make all the difference.

Once you find your perfect hand position, realize that this position doesn't have to always be the same. The natural movement, torque output, and stabilization that come from adjacent joints working together is a pivotal aspect of pressing pain-free. As long as you start out in a semi-neutral grip and stay somewhere within that angle for each end range of a press, you'll be well on your way to pressing pain-free.

To start off with this hand position, think of a 45-degree angle of the dumbbell handles. This is halfway between the neutral grip and traditional grip. You may deviate slightly from here, but see how it feels before you go off the deep end in any direction.

To take a little emphasis off the anterior shoulder and pectoralis group while healing up from a shoulder injury, close-grip barbell variations are very effective. First, the bench press is considered a compound movement with the primary movers being the pectoralis major along with the anterior portion of the deltoid. For most lifters, these two tissues are responsible for creating the primary force of a successful press. In terms of secondary emphasis on a horizontal press, the triceps become not only active, but may even become the primary mover in certain ranges of motion.

Close-grip variations place a larger emphasis on the triceps. When the triceps become a primary mover of a press, the chest and shoulders take somewhat of a backseat. By placing your hands closer together, you're essentially limiting the range of motion that your shoulders are able to achieve into a horizontally abducted and extended position, which is the most vulnerable position for the shoulders.

How close should your hands be? You'll have to experiment and see what works for you. If you've been benching with pain, it'll be clear that your hands need to be positioned closer. Move the hands in slightly. Keep moving in until your shoulders are less pissy and your triceps feel the brunt of the load, especially as the bar is approximating the chest.

5 – Do the Machine Press

This will seem like a bit of reverse logic because poorly executed machine work is part of the shoulder epidemic in strength training. But before you tune out due to the word "machine," hear me out. When it comes to reeducating movement patterns, machines aren't the most effective tools. But for experienced lifters who've spent the time to learn how to properly move, stabilize, and activate in their big compound lifts, machines can get them through a bout of shoulder pain or injury.

The chest press machine works if you can appreciate what a truly packed shoulder position with torque stability and compression feels like. By eliminating degrees of freedom in the movement, more of an emphasis can be placed on static positioning of the shoulders into an advantageous position to work from, especially when battling against pain. Less stability requirement means that it should be pretty solid.

Machine pressing also allows you to manipulate your hand position and create the perfect amount of synergistic spiraling effects through the upper extremities that isn't always possible when using bars. The false grip (not wrapping the thumb) allows more of a supinated hand position that leads the elbows to less of a dynamic carrying angle and finally allows the shoulder joint to sit exactly where we want it.

Finally, most machines, especially the ones rigged on cable setups, have some degree of constant tension placed on the loading, meaning there will always be about the same load on each range of the movement. This allows you to use constant tension and tempo. The more compression of your perfectly positioned shoulders into the glenoid fossa, the better the movement will feel. And the less speed and velocity this movement is executed with, the less of the chance of re-injury during press specific training.

Pin-loaded machines are great when training around shoulder pain. They also tend to be some of the most accessible machines out there, so finding one shouldn't be a problem. 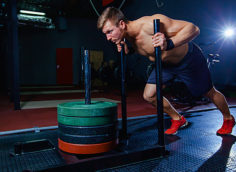 Get more powerful and have some fun while you do it. Try these 6 sled moves.
Training
Merrick Lincoln, DPT April 6 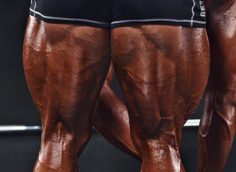 You probably have a strength imbalance, and maybe a physique imbalance too. This exercise will fill in the gaps.
Bodybuilding, Legs, Tips, Training
Tom MacCormick September 6

Warning: This workout is gonna hurt. Get ready to use time under tension, multiple angles of attack, and a whole bunch of lactate.
Bodybuilding, Shoulders, Training
Christian Thibaudeau September 1
One of the most common areas of confusion for bodybuilders and other athletes engaged in resistance training is the question of the appropriate or optimal number of reps and sets for any given workout session or cycle.
Training
Charles Staley October 27