Why You Gotta Do Face Pulls

The face pull is a staple exercise that belongs in all programs no matter the goal. Healthy shoulders are not a given; you have to work for them.

If you want to create a strong and stable upper back that acts as the cornerstone of your performances under the bar while ridding your shoulders of front-sided shoulder pain, you better be hammering loads of volume with different face pull variations.

Here are five ways to make it even better, and a few variations that will be game-changers for your upper back strength and shoulder longevity.

The banded face pull is one of the most effective tools for building a thick and functional upper back to support the dynamics of the shoulder. Using only a band with hands placed in a pronated position, driving your elbows back and the band to your face against accommodating resistance, has some major benefits that make it my go-to variation.

Many athletes don't have access to cable stacks or machines, so using a common tool like the band is practical. But we need to be a little more selective with the kinds of bands we use for the face pull. Those tubular bands with handles on each end aren't going to cut it. You need circular bands. Why? It's all about the "face pull-apart" when we're talking about maximal activation and trainability.

Set up the band attached to a stable unit like a rig or squat rack at about head height. Drive back your elbows, staying around shoulder height. On the backside of the rep, your hands need to not only be pulling back on the band, but also driving apart from one another.

This detail will be a game-changer for your upper back activation, so focus on peaking the contraction as hard as you can, driving elbows back and pulling the band apart for a split second before controlling the band back into the starting position.

I prefer to program the overhand-pronated grip to its counterpart, the underhand or thumbs-up grip. This is due to the varying degree of external rotation range of motion that's involved on the backside of the movement pattern.

In the overhand grip, slight external rotation is achieved by the limiting factor, which is the wrist position into flexion during the pull. A golden rule is to never load a movement pattern heavy into ranges of motion where dynamic stability isn't present. You must first earn the right by executing perfect full range of motion movement patterns before loading it up. So keeping that in mind, the underhand grip is programmed for a different goal than the overhand grip: activation and corrective movement.

Using the underhand grip on a band or cable helps tap into more corrective-based ranges of motion for the shoulder and upper back while learning to stabilize the thoracic spine and shoulder blade during dynamic rotational movements at the true shoulder joint itself.

This variation requires lighter loads and slower, more controlled movements in order to avoid flaring up the shoulders or placing undue stress over the rotator cuff or other acute muscles being loaded. If you can set your ego aside and load this movement properly in the 6-12 rep range with total control and stability, the activation benefits will become apparent fast.

The face pull can be loaded in the upper strength and hypertrophy rep ranges as well. But as you start climbing your way up the weight stack from a standing position, you'll quickly hit a ceiling on the loads you can stabilize without compensating at the torso, hips or lower body. As the weights get heavy, two key mistakes usually happen.

First, the lifter leans back and alters the mechanics of the movement. Second, many will split their stance and sit into a rotational moment at the hips and spine, which again loads the exercise in a symmetrical way, negating the "pain-free-ness."

Sure, some coaches will preach that you should only train loads that you can control from a symmetrical standing position, but why not alter the setup to reap the best of both worlds? This is where the seated face pull comes in.

By sitting on a bench or box, you can create better contact points with the ground, mainly from your ass on the bench and your feet on the floor. From this position, you can better stabilize the torso and spine while dialing in the ideal angle of pull that's stable and actively supported by the musculature of the pillar. This position also can create a higher angle to face pull from, which is great for ensuring that the prime movers (scapular muscles) are targeted and the upper traps and neck don't take over.

From the seated position, you need to remain highly active by contracting the glutes, adductors, core and shoulders to achieve a perfect position first before you initiate a heavy face pull. From that base, loading into the 6-10 rep range will become a staple upper back builder that's not only effective, but easy on the shoulders too.

Due to the restorative range of motion that the face pull brings your shoulders, you truly can't get enough of this type of movement. I consider this strategic upper back work as "pain-free volume" and is otherwise "free volume" that won't place huge amounts of unwanted mechanical or neurological stress on your body.

So what does that mean? If you struggle with your posture, your pressing power, or your shoulder health, you need to be hammering as many face pulls as possible throughout the week. For optimal shoulder health, your weekly pull-to-push ratios should break down to 2:1 for the average person, or up to 3:1 if you sit for prolonged periods of time or you have an injury history around the shoulders, neck, or upper back.

That's a shit-ton of pulling, especially if you hit the bench a few times a week. So how do we get in that much volume? Add movements like the banded face pull into your normal programming in superset fashion.

Between sets of pressing or direct shoulder work, simply add in 5-15 reps of banded face pulls in a post-fatigue type setup in order to maximize the trainability of the upper back (working into those ratios) while not adding any more joint or CNS stress into the equation. Adding in banded face pulls throughout your dynamic warm-up in superset schemes can also skyrocket your overall pulling volume, again without doing a ton more highly stressful pulling movements like rows, deadlifts or high-angle vertical pulling.

Sprinkling in banded face pulls between your sets of direct shoulder work not only helps solidify your programming ratios, but they'll also elicit the metabolic pump effect. Any time you can maximize the localized blood flow into the tissue to extend a set without adding any more joint stress, that's a win for shoulder health.

This one is a bit wacky. But closing your eyes during face pulls can enhance the feel of this movement pattern and allow you to better tap into your mind-muscle connection. It's all about sensory input.

The mind-muscle connection (MMC) isn't just a mythical beast that gets talked about in bodybuilding circles. It's a real life neuromuscular phenomenon that many veteran lifters have learned to tap into. But here's the limiting factor of the MMC: you must know the muscle you're trying to contract actually exists before you can reap the benefits.

During the face pull, the goal is to maximize the activation and MMC of the posterior delts and other muscles of the upper back, helping move the upper arms into horizontal abduction and external rotation. While there are nearly 20 scapular muscles that influence the movement of the shoulder blade, when it comes to improving MMC, we must focus on just one – the posterior delt.

We must be able to focus our mental energies on the feel of the muscle contracting on the peaking portion of the movement. Taking a huge sensory player out of the equation by simply closing your eyes can enhance this.

Without your visual fields in play, you've cut down on the amount of total sensory input feeding into your system. This gives you a better chance to improve mental acuity and focus.

Give this tip some time to work. It's not something that happens overnight. Improving the MMC with the eyes-closed technique is a skill that needs practicing, so it fits in great with the loads of volume that you'll be putting through the face pull movement to keep your shoulders healthy.

Target those forgotten back muscles in a whole new way with this exercise. Here's how to do it.
Exercise Coaching, Tips
Christian Thibaudeau March 1 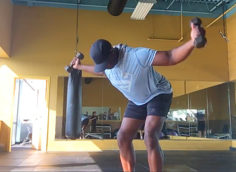 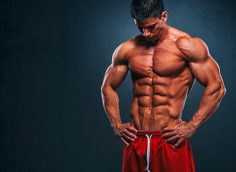 Drop to the floor and try this complete core move. Warning: It's tougher than it looks!
Training
Gareth Sapstead April 27