A few months ago, I published an article entitled 5 Common Technique Mistakes. It was originally intended to be a stand-alone article, but the feedback was good, and I had some follow-up ideas, so I decided to turn it into a series. Without further ado, here are five more common technique mistakes you'll want to avoid.

If you've read my stuff, and that of Mike Robertson and Mike Boyle (among others), then I hope you know by now that single-leg work is really important for knee, hip, and lower back health. However, a lot of people have some technique flaws that can undermine the value of the exercises.

Our first two examples – both are reverse lunges – illustrate the importance of always coaching at 90-degree angles. In other words, be directly behind or to the side of the athlete to observe the most glaring issues. There are exceptions to this rule, but it's a good general guideline.

Weakness and/or poor recruitment of the hip abductors and external rotators – primarily the glutes – are a big problem for a lot of people. Ask anyone who knows a lick about ACLs, and they'll tell you that poor hip abductor and external rotator strength, and the resulting tendency toward valgus stress (knock-knees, in layman's terms) is a big risk factor for some serious knee issues.

In the following video, you'll see that the right hip slips into adduction, and the resulting lunge is somewhat of a step-behind.

Essentially, this parallels the wider hips and greated Q-angle we see in female athletes, who obviously have a lot more ACL problems. In the correct video below, use the line on the floor between my legs as a reference point. Notice how the legs stay on each side of the line?

When people first start doing lunges, you'll often see two problems. The first is a really short stride. These folks have hips that are tighter than bark on a tree, so they simply don't get out of their comfort zones.

You'll see a lunge with more front-leg knee flexion and zero hip extension on the leg that steps back. It's actually something you see in bodybuilders, only they do it intentionally to emphasize their quads:

In my opinion, aside from the frontal plane stability benefits, single-leg work is awesome because it provides tremendous dynamic flexibility benefits: you can really open up the trailing leg's hip. So, when I see a lunge like the one above, my first cue (in people who want to optimize performance and overall health) is to increase stride length and "open up" that back hip. In many cases, these folks will immediately substitute a forward trunk lean.

By flexing the trunk, they can avoid stretching the trailing leg hip flexors – even though the stride length is the same. Just as significantly, though, they put the front knee in an awkward and potentially injurious position: the knee is actually behind the foot. What I like to see instead is a more vertical trunk position with the back leg's knee behind the hip. In other words, the hip is extended, and the hip flexors are stretched.

Here's a perfect example of how seemingly trivial differences in technique on a particular exercise can make a significant difference in training health and longevity.

A lot of people think that squatting is just about extending the knees. So they wind up looking something like this, particularly when they're doing multiple reps and are rushing to drop down into the next rep:

This giant cambered bar box squat – which is intended to be completed with the posterior chain – is basically completed with the quads. Any posterior chain contribution comes from the hamstrings, and you get very little glute recruitment, particularly at lockout. Over time, these folks wind up with lower back issues, anterior hip and knee pain, and the occasional case of mad cow disease. Fortunately, though, the solution is very simple: extend your hips and stand tall.

4 – The faulty side bridge hip set-up

I love the side bridge as a basic, entry-level core stability movement. In the picture below, everything appears to be fine technique-wise. 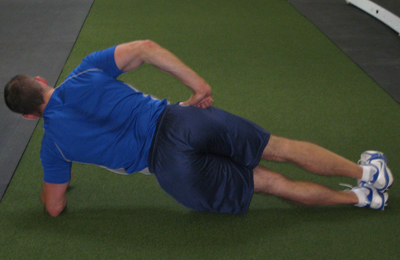 However, if you take this photo from another angle, you can observe the most common technique mistakes we see on this movement: stabilizing in a position of hip flexion. 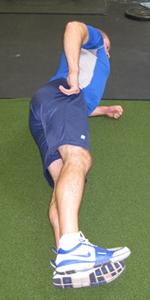 We already spend most of our time stuck in hip flexion/anterior pelvic tilt while we sit, so doing all our stability work in that position won't do much to train us out of that bad habit. So, with that in mind, a simple cue is to pop the hips forward, tighten up the glutes a bit, and get the spine into neutral.

As a little frame of reference, here's what a 23° difference side-to-side looks like (it's important to fix the scapula before checking internal rotation ROM). This is one of our kids who didn't do his sleeper stretches in-season (he was summarily executed): 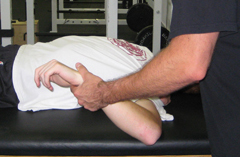 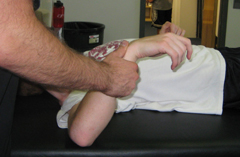 Interestingly, we also see this quite a bit in a regular weight-training population. It may be due to the fact that many of them were overhead throwing athletes in their earlier years, or simply because they've acquired a pattern of substituting scapular anterior tilt for glenohumeral internal rotation on activities of daily living and drills in the gym.

The best stretch to improve internal rotation range-of-motion is the sleeper stretch. Unfortunately, most people perform it incorrectly and don't get the benefits, and actually wind up doing more harm than good in the process.

The most common mistake is that they don't retract and depress the shoulder blade to ensure that the movement that takes place is actually internal rotation and not just scapular anterior tilt. Here's what that would look like: 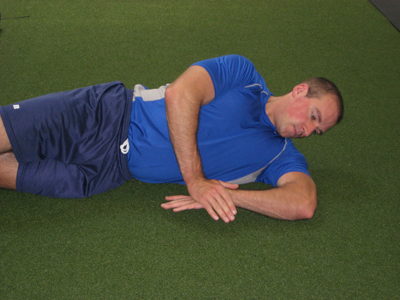 Trust me, your internal rotation isn't that good. This position can place a lot of stress on the anterior shoulder capsule and aggravate labral and rotator cuff problems that may already be in place. It's easily assessed by observing the position of the scapulae from the opposite side. Notice how the shoulder blades are more "angled" and protracted, instead of "stacked" and retracted. 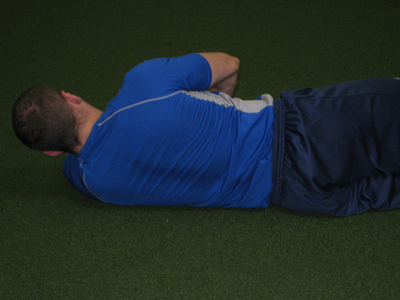 "Scapular protraction" not only sounds bad, it is bad

Now, here's what a decent sleeper stretch would look like from the front and back. 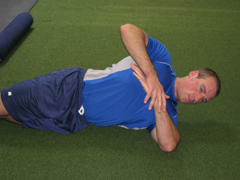 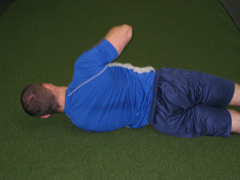 You can make "decent" into "optimal" by simply providing some head-support. We use a foam roller, but a pillow works just as well. 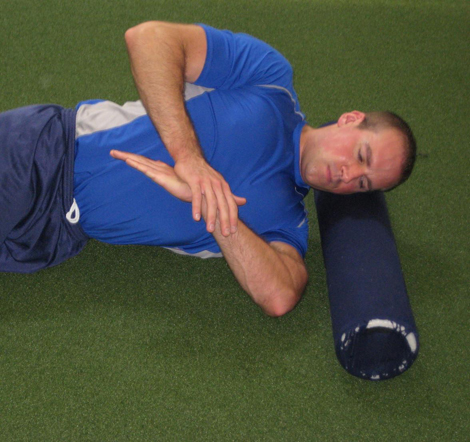 A foam roller turns a good stretch into a great one

Keep in mind that this is meant to be a gentle stretch. I tell my athletes that on a scale of 0 to 10, this should be a 3 or 4 on the discomfort scale. The goal isn't to crank the humeral head out of the socket.

That concludes this installment of Common Technique Mistakes. Of course, there are still a lot of exercise techniques that are being hopelessly butchered, so there are plenty more to come!

Finish off your next leg day with a few sets of these. This is a great technique if your main goal is muscle growth.
Exercise Coaching, Tips
Christian Thibaudeau January 26

Build your back and keep your cranky shoulders healthy with this smart row variation. Take a look.
Tips, Training
Dr John Rusin July 14

How do you finish off a tough leg day full of squats and deadlifts? Like this.
Exercise Coaching, Tips
Mark Dugdale March 22