I’ve been one for many years. I read Dan’s first book, From the Ground Up, and his second, Never Let Go, long before we finally met. I’ve also read many of his published articles at T Nation along the way.

Recently, I started listening to the audio recording of his Intervention seminar and my appreciation for what Dan John brings to the strength and conditioning table has grown even more. He inspires while he educates, and it’s that inspiration that prompted me to write this article.

Dan John gets it. He’s walked the walk as an athlete and as a coach for nearly 30 years. And it shows.

Here are a few pearls of wisdom that I’ve taken from Dan’s books and seminars. The key to being a great coach is to never think that you’re too good to learn and change. As you’ll see, there’s no one better to learn from than Dan John.

Reading Dan John is a funny thing. Sometimes it takes a while to get the meaning behind what he’s talking about. When I first read this concept I thought, “Man, Dan is losing it! You can’t squat every day!”

As I continued to read, I realized that we’re talking patterns, not lifts. The message was “if a pattern is important, practice it every time you train.” I took this to heart and now ensure that my clients’ programming includes some type of single-leg knee dominant exercise and single-leg hip dominant movement every day.

In Dan’s words, we do a squat and a hinge every day. For us, it might mean that on an upper body training day we split squat or lunge and do reaching one-leg straight leg deadlifts as a warm-up. The take home point is, we make sure we’re doing legs and core work every day.

I had Dan as a guest speaker for our annual Mike Boyle Strength and Conditioning Winter Seminar this year. The big thing I took from Dan that day was the importance of loaded carries. Stuart McGill had already convinced me that carries were just moving planks, but even though I liked the idea, we hadn’t really incorporated them. When Dan was done, I’d officially drank the loaded carry Kool Aid.

This year we added suitcase carries and farmers walks in as a “rest” between our sets of sled pushes. Was it the perfect place to put them? I’m not sure, but we had our athletes out on a long length of turf and it made sense. This was a case of simply looking at another great coach’s program, comparing it to ours, and correcting an obvious weakness.

I doubt that Dan invented the goblet squat or even the term “goblet squat.” I only know that he was the first person who exposed me to – and sold me on – the idea.

One weakness in Dan’s early writings was a lack of video or pictures. Back then Dan would go on and on about goblet squats and I’d look at the page thinking, “I have no flippin’ idea what he’s talking about.” Keep in mind, youngsters, that this was before message boards, YouTube, even TNation.

I remember finally getting around to trying goblet squats in my business in the summer of 2010 after years of hearing Dan go on ad nauseum about their supposed greatness. I went into our facility and instructed our coaches to switch the worst squatters from whatever type of squat we had them attempting to goblet squats. Some were trying to learn to front squat, others were simply bodyweight squatting.

The addition of the dumbbell in the goblet position was nothing short of a miracle. Every single athlete, all chosen for his or her lack of squatting technique, improved dramatically. I was sold – so sold that we decided the first loading position for any athlete in any squatting movement would be the goblet position. 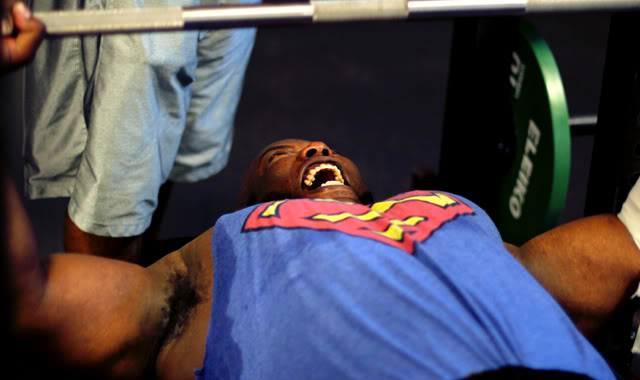 I’m a numbers kind of guy, so I love the idea of standards. This was another gem that I’d taken from Dan’s talk at our winter seminar that was reignited in my mind as I listened to the Intervention tape during my drive in to work.

Dan has a way with words. In Intervention, he uses the line “My Standard Standard.” I thought it was funny. I also thought it was brilliant. Dan’s “standard standard” is simple:

Many readers will take issue with this, but if you train athletes this couldn’t be truer. The reality is that if you can bench press 300 pounds, you can also front squat it and clean it. If you can’t, the reason is simple. You aren’t trying hard enough.

Dan goes on to provide a standard for high school football:

While not overly impressive numbers, they do add up to a good athlete who’s spent some time in the weight room doing the right things.

Dan went on to describe one more standard in the loaded carry category. If you can farmer’s walk your bodyweight (split between two dumbbells) for 50 yards, you’re pretty strong.

Standards. You can argue them till you’re blue in the face, but the fact is, they make sense. I also have a standard with my Boston University hockey players, although slightly different.

If my guys can do that, I know they’re working hard in all areas. If they’re exceeding the bench in the hang clean and RFESS, all the better. I always tell my guys, “If you are going to suck at one lift, suck at the bench. It’s the least important.”

The chin-up is the combination of bodyweight plus the weight on the dip belt. If you can do this, you’re unlikely to get a shoulder injury and are also quite strong. Our average player will do 1 chin-up in a test situation with 90-120 pounds attached.

The last bit of Dan John wisdom relates to the idea of reps. Dan has what he calls The Rule of 10.

In Dan’s world, the Rule of 10 applies primarily to the deadlift, clean, and snatch. According to Dan, a good workout in these total body lifts calls for 10 reps. It could be 5-3-2 or 2×5, but the total is 10 reps.

Dan goes on to say that in what he calls “half body lifts” (bench press for example) you can do up to 25 reps, but to me the rule of ten can apply to every lift. In an 80-20 world, 80 percent of the workouts should have sets adding up to 10 reps. 20 percent of the time could be higher or lower.

Dan notes that most classic workouts tend to total about 25 reps. However, my feeling is that after warm-ups most good workouts still come down to about 10 good quality reps.

There are lot of books and reading you can be reading, whether it’s business, self help, or even boring old strength and conditioning. My advice is to read some Dan John. There’s plenty there far beyond the iron and dumbbells to make you a better lifter, coach, and person overall. After all, thirty years of experience is one heck of a deep well to draw from.