These days the Prowler is everyone’s choice for conditioning. Yet as much as I’m a Prowler fan, there are other effective conditioning options out there.

Note: in no way is the intent of this article to “bash” the Prowler. Instead, it’s to give you perspective on how to choose the best conditioning tool to fit your specific needs and goals.

In the fitness world it seems “you’re either with us or you’re against us.” In other words, something is either “good” or it’s “bad.” If it’s bad, we never use it. And if it’s good, we use the shit out of it.

The fact is that there’s really no good or bad exercises, just poor applications. In the case of the Prowler, I consider it to be a great tool that’s being way over-applied.

To use a tool effectively you have to understand its pros and cons and above all else, be objective. Here’s my list of pros and cons for the Prowler. 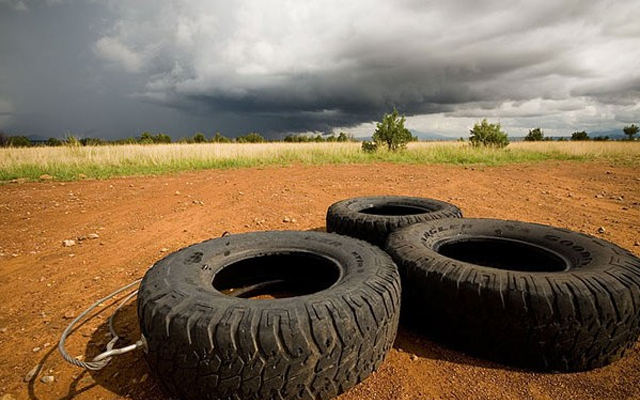 At Performance U I use the Prowler mostly with general fitness clients and physique competitors as a “finisher” and with injured performance athletes who are unable to do the drills listed below.

But if you’re a healthy, uninjured performance athlete looking to enhance your sports performance by training in a manner that will have functional carryover to your sport, the following would be my go-to conditioning drills over the Prowler any day.

This is one of the absolute BEST ways to improve cardio conditioning, stride length, leg drive/power, and build a great looking, athletic physique. In addition, the impact on the joints is much lower than running on a flat surface since you’re always stepping up to something.

Hill sprints are also a more natural exercise, allowing the arms to swing while keeping the torso in a natural, upright position. It also forces you to move fast with the momentum of your legs swinging into the strides.

Find a fairly steep hill that’s at least 25 yards long. If you’re lucky, you’ll find one about 50 yards long. Run up the hill and walk down it as many times as you can in 8-15 minutes. Each consecutive workout, try to either perform more reps (trips up the hill) or simply lengthen the time. You can also wear a weighted vest (as long as it’s snug) and keep adding weight to the vest each workout.

With the vest, you can also undulate every other week.

Week 1  use the weighted vest.
Week 2  no vest and go for faster speeds.
Repeat

Note: I recommend walking back down the hill and NOT running down it.

Find a stadium or local high-rise building and hit the steps. If you’ve never done this, it’s a very humbling experience. You’ll find that your legs get even more smoked from going back down the stairs to start your next climb than they do sprinting up them.

One side “benefit” from stairs running is having to think and use your balance and athleticism to not trip and fall on your face. You certainly don’t get that from the Prowler.

There are three primary ways I’ve used stairs as a conditioning tool.

I like to progress the stairs workouts the same as I do the hill sprint workouts, discussed earlier. I’ll also include weighted vests here as well.

If your high school experience was anything like mine, the term “suicides” brings back gym class and wrestling practice flashbacks. I say keep the memory alive and add some old-school shuttle sprint work to your conditioning workouts.

Considering most readers aren’t concerned with improving their 40-yard dash times, I’m referring to 200-300 yard shuttle runs. That said, these shuttle runs would likely have a more positive effect on your 40 time than Prowler work since they’re more similar to the 40-yard dash.

I’ve already described how to perform 300 yard shuttle runs and an alternative using the treadmill in this article. Bring some of these shuttle runs into your life and you won’t just want to take a rest afterward; you’ll want to go home and take a nap!

Dragging a tire by using a harness allows the arms to move in a natural action, increasing shoulder involvement while activating the core to work harder.

The harness also forces you to keep a straight, stiff spine throughout the exercise, regardless of how tired you get. Rounding the back at anytime will immediately look and feel very awkward, giving instant feedback to straighten out or stop and rest.

Also, unlike the Prowler, in which you can kind of ‘hang’ off the handles, you have to drive into the sled harness. If you try to just hang on it you won’t move much at all.

Here are my favorite ways to use the tire to build insane conditioning.

This is Prowler pushes, version 2.0. I like using the tire for the following reasons.

Use the same workout protocols as described with the tire drags.

Now, don’t get all bent out of shape simply because you’re emotionally attached to the Prowler. I’m NOT saying the Prowler is no good; on the contrary, I love it! But it’s just a tool, and a tool can be used or downright abused and overused.

You need to understand both the pros and cons of everything you do in the gym – even what’s immensely popular – and while the Prowler is a great tool, it’s also a slower, more grinding exercise that’s not as athletic or natural as the other drills I’ve provided.

The keys to training are variety, intensity, and specificity. I’ve given you some effective tools to incorporate these three keys into! Now get busy!