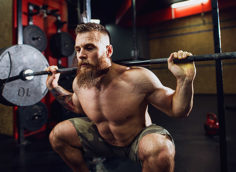 You don't have to live with an ugly squat. There are three things that could be causing it. Here's how to figure out which one it is and fix it.
Training
Chris Peil January 2

Make the spider curl even better: push the dumbbells together for a harder contraction. Once fatigued, move the elbows back to extend the set.
Arms, Bodybuilding, Exercise Coaching, Tips
Michael Warren April 25

What's better than great looking abs? A core that's as strong as it looks. Here's how to build one.
Tips, Training
PJ Strebel May 27