It's often useful to examine what we think we know about training, nutrition, and all the different ways we seek and track results. The biggest and scariest stumbling block, though, is what happens if (or when) we realize that we've been believing in something that's inefficient, or worse – simply wrong.

If it turns out that we've been perpetuating myths or doing the same things just out of habit, we've got to be open to change or else we run the risk of looking the same and lifting the same weights year after year.

Every gym has "that guy." The one whose routine you could write out because, every single time you see him, he's doing exactly the same thing – same exercises on the same days for the same reps with the same weight – like he's been trapped inside a repeating space-time loop from day one.

That guy's not going anywhere because he's stuck thinking one way. He believes his current training is awesome and his (lack of) progress is right on point. Let's make sure you aren't making the same mistakes.

1 – You Are Not Your Somatotype

It's a popular system of categorization because it seems so cut and dry. If you look like this, then you're called this and you have these natural-born disadvantages, which means you should eat and train like this. That's why it's so appealing to lifters. It's a system of built-in excuses. "Oh, I'm an ecto so it's not my fault I'm 6'3" and 155 pounds. I've got, like, a serious condition."

The problem is that these categories were originally described in the early-1940s by Dr. William Sheldon, a psychologist, who was using them as a way of predicting personality traits based on one's general appearance. It had nothing at all to do with actual physical improvement.

Sheldon's work was based on earlier research by Dr. Ernst Kretschmer, a psychiatrist in the 1920s who also attempted to connect the dots between physique and behavior. Kretschmer essentially believed that fat guys were more prone to be happy and skinny guys were most often nervous. The more "extreme" the physique, the more extreme the personality. Yeah, it's about as accurate as it sounds.

This is the problem with lifters being so quick to slap one of these labels on themselves. It simply doesn't have any real world translation to how they should be training or eating.

Maybe it's mentally reassuring for the underweight newbie to "know" that Frank Zane was an ectomorph too and he still managed to win three Mr. Olympia titles. Maybe the pudgy beginner looks at four-time Mr. O Jay Cutler and thinks, "Wow, if that endomorph can build so much muscle and still get lean, so can I." But neither lifter will get anywhere unless they stop trying to use psychological terms to influence their physical preparation. Drop the labels and deal with yourself as an individual.

If you're 6-feet tall and 160 pounds, you don't need to "eat like an ectomorph." You need to eat like a tall, skinny guy who's trying to gain weight. Maybe you have a fast metabolism (a stereotypical ectomorphic quality) or maybe you don't. Wanna know an easy way to find out? Eat some food for a week. If you didn't gain weight, eat more than that the next week.

On the other hand, if you're 5'5" and 240 pounds of rotund joviality, you're not an endomorph. You're a fat dude. Ditch the excuses and crack down on your diet. It's simple physiology. Fat dude plus lifting plus cardio plus smart diet eventually equals lean dude. There's nothing "endomorphic" about it.

Every single ectomorph or endomorph-turned-successful bodybuilder has a few things in common: They trained hard as hell, they ate smart, and they stuck with it for the long term. It's amazing how those three steps seem to magically overwhelm whichever unfortunate somatotype you're dealt.

2 – Measuring Your Body Fat Is Pointless

Here's another issue that plenty of lifters get stuck on. There is precisely zero real world relevance to knowing your numerical body fat percentage. None. Nada. Kinda like IQ, the main reason to get professionally tested is so you can then go around telling people, "I was tested and this is my score."

Pro-bodybuilders are generally anywhere from 2% to 5% body fat when they're up on stage, but even then it doesn't matter what their actual body fat percentage is, because there's no body fat testing round. Of course they need to be ridiculously lean, but there are times when the guy who's 5% body fat will look better than a guy who's 3% body fat. On competition day, it's the look that matters, not the number.

For those of us who never plan on donning the trunks, it's still a giant waste of time to track body fat percentages because even if you can get a reliable measurement (which is a whole challenge in itself), you still end up with an intangible concept – a number. At best, it's not going to tell you anything you couldn't already figure out. Your preferred terminology might vary depending on your self-esteem, but you're either really lean, kinda lean, not so lean, or a big fatass. In any case, saying you're 9%, 14%, or 21% means diddly-squat because it's floating out of context.

When using body fat percentage to monitor progress, you need to take consistently accurate measurements to compare on a regular basis. Even then, it's more for establishing "baseline" and monitoring "baseline plus or minus X" as the weeks go on. Fourteen percent this week and 12% next week should mean fat loss progress, as long as both measurements were done correctly.

But if you "need" to know your number, either for bragging rights or just to have some particular goal to work towards, there are some general rules most trainers agree on without having to bust out the calipers.

Love handle spillover, a.k.a. the manly muffin top, is closer to the 20-25ish% range. If you can pinch more than the proverbial inch around your waist and your pecs are in need of some "support," it's probably time to consider a dedicated cut unless you've also got an impressive bench press that's earning you a paycheck.

Ten percent is roundabout where abdominal definition (4 or 6-pack) might not be super-deep, but it's noticeable pretty much 24/7, and you can see some muscle separation at the shoulder/upper arm tie-in without having to stand under that one good light in the bathroom that's angled perfectly. Some quad separation is probably also happening when standing mostly relaxed.

The mid-to-high single-digits is where things can get crazy. Deep abs (magazine cover-quality 6-pack) with distinct obliques and serratus, constant separation in the quads and triceps, and back muscles that stand out without a pump.

It's the sort of intense condition that's difficult, if not near-impossible, to maintain for more than a few weeks at a time without constant attention to nutrition. More than just "I'll hit the drive-through for dinner and try not to be too bad."

If a lean, well-built physique is your goal, don't stress out about reaching a certain body fat percentage. Stick to using photos or tape measurements as a progress-tracking method. They're much more reliable and unbiased. People screw up body fat calipers all the time, but a flexed and unpumped arm either fills the tape measure to 17 inches or it doesn't.

When setting goals and choosing a target, stick with photos or general "concepts of a physique" like lateral delt-rear delt separation, a six-pack that's defined first thing in the morning, and/or pec striations. It'll be easier to focus on that kind of target rather than an ambiguous "8% body fat just like Mikey the Cover Model" because A) who even knows Mikey is 8%? and B) what if you look just like him after 14 weeks of hard training but you only end up measuring at 10%? Would you seriously consider the diet a failure just because you didn't meet some random number?

If we want to build big muscles, we should train the way people with big muscles train, right? But here's the mindblower – lots of people have built big muscles using full body workouts. In fact, back when the original "body-building" programs were part of Physical Culture, generations of lifters got bigger and stronger, and nearly every plan involved training the whole body in each workout.

Body part splits aren't the one and only path to getting jacked. I understand that this might seem contrary to other advice I've written about, especially this article explaining the importance of training each body part, but I promise I'm not arguing with myself like some mental patient. Both methods work.

The point I'm getting at right now is that full body workouts don't deserve a fraction of the hate they get because they're useful and can be effective for most anyone, regardless of experience.

Think "row, bench press, and leg press" or something similar. It's a solid way to hit everything from head to toe in one session and can definitely leave you feeling well-worked afterwards. But recognize that a full body workout could also look like:

Quite a bit more involved, but it certainly trains the whole body in one workout. This bigger, more involved type of session is most likely what people consider more appropriate for beginners and less effective for advanced lifters. I agree with that, to a point.

A more experienced lifter will often benefit from more volume and/or intensity per body part than a beginner, making a workout that includes eight or more body parts incredibly inefficient and difficult to maintain over the long-term. However, a well-designed program that properly manipulates the volume, intensity, and exercise choice can let even an advanced lifter train their whole body every time, for multiple full body workouts each week.

And as we're learning, or re-learning, a smart high frequency program is one of the straightest paths to physical awesomeness. For almost 100 years, some type of whole-body workout has been used by lifters and recommended by some of the best trainers as a way to build size and strength, regardless of experience.

Lest you think that full body workouts are automatically devoid of isolation work, that's simply a matter of programming. There's plenty of room to include isolation exercises, for large or smaller body parts, in a program that intelligently manipulates basic training variables (volume and/or intensity) throughout the week.

In the 1920s, workouts of squats, pullovers, overhead pressing, and curls were often recommended; in the '50s and '60s, Schwarzenegger-role model Reg Park advocated one of the first 5x5 programs.

More recently, experienced coaches like Chad Waterbury, Jim Wendler, and Christian Thibaudeau have recommended variations of full body training. All without mentioning the asterisk of "for beginners only."

Body part splits work, yep, no doubt – but the ignorant presumption that they're the only way for advanced lifters to gain size and strength is about as accurate as saying "low carb is the only way to lose fat."

Now's a perfect time to double-check your own training, nutrition, and result-tracking beliefs to see if it's time to swap out current ideas for something new. Discover something that you're ready to change? Let me know in the comments section. 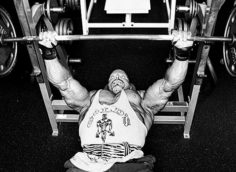 It may just be the biggest of the big compound movements. Find out why this hellacious exercise is a favorite of Charles Poliquin!
Training
T Nation January 4 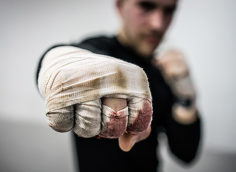 Guard your face without burning out. Strengthen your shoulders to stay resilient. Here's how, plus a cool breathing technique.
Training
Alex Chrysovergis November 7 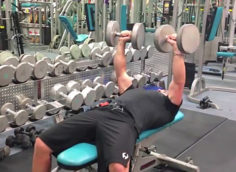