Here are 3 reasons your calves don't quite get mistaken for your quads.

Many people argue that calf size is almost completely genetically determined. There's some truth to this. The soleus muscle of the calves has a muscle fiber composition that can be up to 90% slow-twitch dominant, and slow twitch muscle fibers have roughly half the growth potential of fast twitch fibers. In line with this, the soleus has only 42% of the capacity of the vastus lateralis in the quads to synthesize muscle protein after training.

There's another reason that the calves, especially the soleus, are relatively unresponsive to weight training. The calves keep your body upright when you're standing or walking. That means they're active throughout the entire day. As a result, the calves are already further developed than any other muscle in "untrained" individuals. Note that this isn't a genetic limit – it's an environmental effect.

Aside from their fiber type composition, there's nothing inherent that prevents the calves from growing. There's no genetic voodoo curse cast over your calves to keep them puny for life. However, both training status and muscle architecture should be taken into account in your training program design. The calves require a high volume and a high frequency of high reps, especially the soleus. The gastrocnemius requires more moderate training parameters.

To give you an idea of the effect of volume on calf development, highly trained runners in one study had 20% larger muscle fibers (type I and IIa) than recreationally trained runners. This may not sound impressive until you consider that the recreational runners in this study were already running up to 15 miles (25 km) and training up to 4 times a week, while the highly trained runners were averaging 59 miles (95 km) a week. That means even in individuals training a muscle 4 times a week, simply doing more of the same can increase your calves by over 20%. More importantly, running is generally terrible for muscle development, which makes the results all the more impressive.

When trained properly, your calves should be able to grow about as large as your neck or your upper arms. This is the case for almost all elite male drug-free bodybuilders. In women, the calves actually have a somewhat higher growth potential than the upper arms. Only if your ankles are small compared to your wrist do you have a legitimate reason to have calves that are much smaller than your arms and neck.

By small, I mean that your ankles are significantly smaller than 125% of your wrists as a man, or 120% of your wrists as a woman. (These are also almost exactly the measurements corresponding to the classical Graecian ideal and various other templates of a perfect physique.) So no more excuses. Your calves aren't small because of genetics. Your calves are small because of problems in the following two areas.

Lots of lifters have arm days, shoulder days, and chest days. But how many people do you know who dedicate a day to calves? Similarly, do you ever train your calves first during any session?

Exercise order greatly affects both the immediate effect of the exercises as well as the long-term effects. A group of Brazilian researchers compared two upper-body training programs that differed only in the order of the exercise. In one program, the bench press was performed before the triceps extension while in the other, the triceps extension was performed before the bench press.

The following graph shows the effects of the two programs on maximal strength and muscle size. The values are effect sizes, which are a standardized measure of progress used in statistics to account for mitigating factors like the duration of the program and inter-individual variability. As you can see, the exercise you perform first is the exercise that progresses most and determines where you gain the most muscle.

Just after your warm-up, your nervous system is still fresh and metabolic waste has yet to accumulate in your blood. Your body is in a perfect state to adapt to anything you throw at it. As rigorous training commences, lactic acid production causes acidosis in your blood as a byproduct of not having enough oxygen to fuel energy demands.

The breakdown of muscle protein floods your blood with ammonia to levels actually exceeding those of liver disease patients, actually causing some degree of brain toxicity and various neurological disturbances. Muscle fibers and their connective tissue tear and become inflamed from the tension of contracting against maximal resistance.

That's the condition your body is in when most people decide to train calves as an afterthought after a heavy leg day. Want your calves to grow? Start by giving them the attention you give your mirror muscles.

Every muscle group has a primary exercise, one that allows you to lift a heavy weight and stimulate the muscle in a natural movement pattern. The pecs have the bench press and the quads have the squat, but what do the calves have?

To find the best calf exercise, I asked several bodybuilders, fellow personal trainers, and professors what their favorite calf exercise was. None of their choices met my stringent seven principles of exercise selection (compound movement, long range of motion, directness of stress, microloadability, etc.), but standing calf raises came closest.

The problem with calf raises, however, is that the ankle, specifically the talocrural joint, is a hinge joint. The ankle can only cause movement in a rotary fashion, just like the elbow. Yet calf raises are a straight up-and-down motion. This is why good calf raise machines have a shoulder or footpad with a hinge instead of a slider.

However, even if you do have access to a calf raise machine like that, calf raises still aren't optimal. The design of the machine will never perfectly fit your anthropometry. It's designed with the average foot length and body height in mind. Know the feeling of regular jeans feeling like skinny jeans on your legs while still being incredibly baggy around your waist? That's the same reason you need a custom tailored exercise for the calves.

Furthermore, the length-tension relationship of the calves and the Achilles tendon makes the calves strongest when they're stretched or in the partial range of motion used during walking. When you combine this fact with an imperfect hinge mechanic, it results in calf raises having a sticking point in the top portion of the movement. That's why calf raises often feel somewhat off.

The solution? Calf jumps. Calf jumps start and end in the same position as regular standing calf raises. However, instead of performing a strict calf raise, you jump to the top position. Thinking of jumping will automatically cause your knees to move forward followed by the natural extension pattern of a jump. As a result, calf jumps have an excellent resistance curve.

Note that your feet and your shoulders should never leave contact with the machine. If you feel this happening, you're using far too little weight. This is a true strength exercise. You should be able to use more weight than you can squat. Your core will be heavily taxed and you should warm up properly before doing these.

You're now armed with one less excuse for puny calves, one more exercise for developing monstrous calves, and all the scientific knowledge you need to optimize your calf training program. Go put it to use. 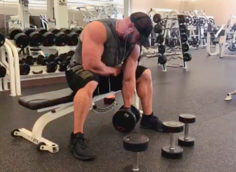 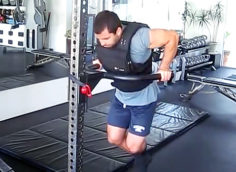 Start with 5 reps then do a 5 second iso-hold at the bottom. Do the same thing with 4 reps (4 second hold), and on down to 1 rep.
Chest, Exercise Coaching, Tips
Ben Bruno September 2

Crank the incline and get ready to torch some fat. Try this workout made popular by an NFL Combine prep coach.
Metcon, Tips, Training
Dr John Rusin January 25 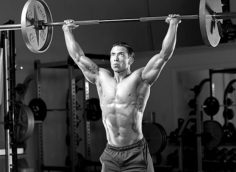 Stop overarching your lower back with overhead presses. These 4 exercises will strengthen your core, fix your form, and keep you honest.
Overhead Press, Shoulders, Tips, Training
TJ Kuster November 21