The deadlift is the purest test of strength in sports.

It's beautiful simplicity. Grab onto a heavily loaded barbell, then stand up straight with it in both hands, at arm's length.

But while the deadlift is a simple lift to perform, producing world-class deadlifting numbers is another story. In the past 20 years countless squat and bench records have been shattered, yet many deadlift records stand defiantly unbroken. Granted, this can be attributed in part to advances in bench shirts and squat suits, but not entirely.

To further complicate matters, interview 20 strong deadlifters and you'll get 20 different ways to train it. Records have been broken by avoiding the deadlift altogether in favor of only assistance exercises, and they've been broken by hardcore deadlifting four times per week or more.

I've written extensively about deadlift technique in the past, so the focus of this article is going to be on deadlift programming. In other words, how to design a deadlifting program that actually delivers results.

However, if you do need to brush up on your technique – and most do – check out this video.

Let me begin by sharing with you the exact training cycle I used to produce my best ever pull of 1008 lbs. I'll follow it up with an outline of a 16-week deadlifting program that should reward you with a more manly pull.

The Training Cycle That Produced 1008 lbs.

16 weeks out from competition

Weeks 16 to 11 were spent pulling from blocks. The blocks were about 8 inches high and started with the bar just below the bottom of my kneecap. I'm not a fan of pulling from any higher as I think the movement just becomes an ego stroke and fails to carry over well to the full deadlift from the floor. (The exception being if you want to use very high blocks for grip work.)

After this 6-week period I switched to pulling all deadlifts from the floor. It should be noted that every rep was pulled as explosively as possible.

(If you're an American and don't use the metric system, don't sweat the kilogram to pounds conversions. We're simply illustrating a point. When we lay out a routine later in the article, we'll use pounds.)

I performed 5 to 10 sets each session and ramped up to the top sets. Some weeks I took smaller jumps and did more sets, other weeks I took bigger jumps and did fewer sets. Varying the training volume in this manner is essential for long-term success in the strength game.

I wore my belt on all sets over 40% and wore my deadlifting suit three times during the cycle, just so I was used to the feel of it. The deadlift suit doesn't take anywhere near the effort to learn as the squat suits and bench shirts do, hence only wearing it three times.

Deadlifts were performed on a Wednesday night and were preceded by squats. The sessions were wrapped up with assistance work for the hamstrings and quads.

Core and grip work was done on a Saturday.

Note: before you race off to copy this program in the hope of pulling 1000 lbs., be aware that I am extremely explosive, which is why I can use relatively light weights in training and still pull over 1000 lbs. at a meet.

To give you an idea, in my early training days I could sprint 100 meters in just over 11 seconds at a 17 stone (238-pound) bodyweight. Most clients that I design programs for aren't blessed with this level of explosiveness. 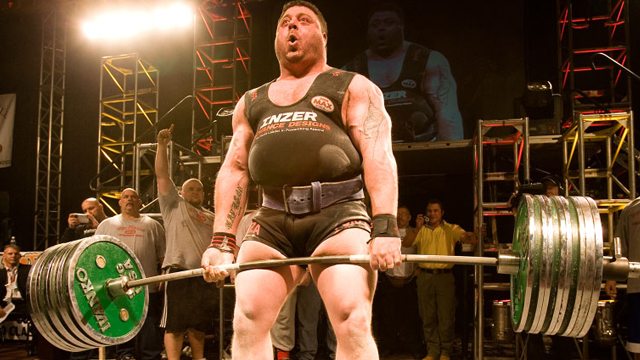 So that's how I pull big. What about you? Below is a 16-week deadlift program guaranteed to add pounds to your pull.

You should be able to pull at least 1.5 times your bodyweight before attempting this. Those who fail to meet this benchmark should find a simpler program. So be honest about where your strength is before taking this on.

Wrap the sessions up with assistance exercises for the glutes, hamstrings, lower back, and core.

Wrap the sessions up with assistance exercises for the glutes, hamstrings, lower back, and core. Choose different exercises from the ones used during weeks 16 to 12, or if you prefer to keep them the same at least switch up the number of sets and reps.

This is the peaking phase that will lead to a new personal best.

This is a very straightforward, easy to use peaking cycle. I've relied on cycles like this throughout my powerlifting career.

I sincerely believe that if more lifters would apply the old K.I.S.S principle (Keep It Simple Stupid) to their training, we'd see more strong guys in the gym and a lot more broken records at the meets.

The following peaking cycle isn't fancy, but it works. You have to plug in your own numbers, so I'll run you through a few examples to show you how it's done.

A cycle for a 400-pound puller hoping to finish the cycle with a new personal best of 425 lbs. would look like this:

Use 4 to 6 sets to work up to your top weight and don't burn yourself out with too many reps on the warm up sets. Five reps on any given set is the most you ever need to warm-up.

Note: it's okay to vary the number of reps per warm-up set to preserve energy for the top set. For instance, on week 3 you have to hit 390 lbs. for a double. Your warm up sets could look like this:

As you can see, the weekly jumps in weight don't have to stay the same for the duration of the cycle. 30-pound jumps are used for the first 4 weeks and then the lifter switches to 25-pound jumps.

A general rule is that the stronger you are, the bigger the jumps you can take from week to week.

When do I do my squats?

The answer is either before the deadlifts or on a separate day, preferably 3 to 4 days after your deadlift workout.

I personally train squats before deadlifts on the same day. I also know plenty of successful lifters who have a separate squat and deadlift day. Take your pick.

As with any training protocol, ultimately you have to find your own path. But I can tell you for certain that those who follow the above plan for 16 weeks will end up with a bigger deadlift at the end of the road. There are few certainties in life, and less in training, but this is one of them.

Similar plans have worked countless times for me, my training partners, and many other world class lifters. As the old saying goes, success leaves clues. 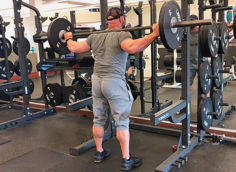