You have a nearly unlimited list of exercises to choose from when designing a resistance training program. Narrowing that list down to the six or eight exercises that are going to make up the workout may seem like an impossible task. However, there are some guidelines you can rely on to help make this task less daunting.

One of the most critical aspects to remember when training is to adhere to the concept of specificity. Selecting exercises based on training appropriate movement patterns rather than just muscle recruitment is critical when training to improve athletic performance.

Further, because most athletic events rely more on power than strength, it's also important to choose exercises that positively affect power development. With these guidelines in mind, it's clear that the clean should be at the top of your list.

Placing the clean at the top of the list may make you cringe, because learning the clean is far more difficult than learning to bench press, squat, or perform a preacher curl. However, there's a way to learn the clean that makes the process much more manageable.

The primary reason I like this approach is because it recognizes that learning to clean is a complex task. Because of this complexity, the clean is best learned in steps, with each step building on the previous step. The result of this is that the clean is learned in sequential components, making the process much easier.

We use 12 steps to teach the clean. Breaking the movement down into small steps provides an effective learning process with the greatest opportunity to learn the movement correctly.

Perfecting the clean can be a difficult process. To keep yourself motivated during the learning process, here are some of the benefits to be derived from performing the clean:

It's important to see the movement performed correctly, either live or (better yet) a recorded performance to enhance the learning process. That way you can use this experience to model correct technique. 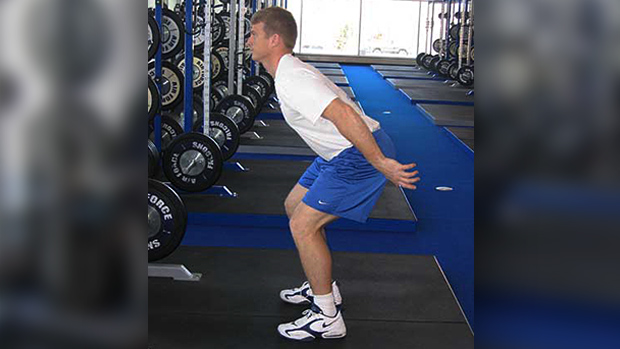 Performing a clean is very similar to performing a vertical jump. Because of this, it makes sense to establish a correct jump position with the feet as a starting point.

To accomplish this, step forward as if performing a two-footed vertical jump, but instead of actually jumping, freeze in a two-footed jump position. The majority of the time this will put your feet in a good starting position. 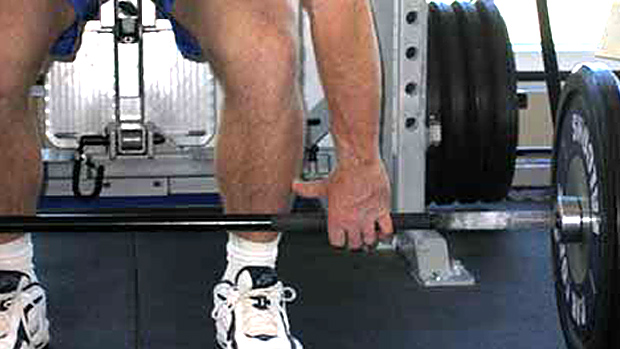 With the foot position established, the next step is to learn correct hand position. Place your hands on the bar slightly wider than the legs in a palm down position with the thumbs pointed toward the midline of the body.

When the hands are correctly placed on the bar, the tips of the thumbs will just touch the legs. This step provides a good starting hand position that can be adjusted based on individual preference. 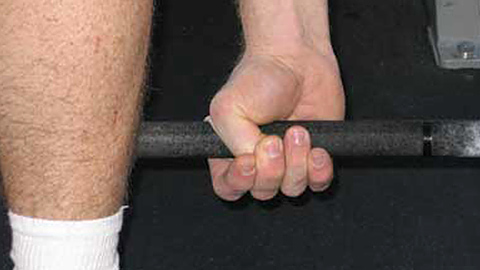 Because the hook grip (thumb wrapped around the bar, fingers wrapped around the thumb) provides a superior grip on the bar, we require our athletes to use this technique when performing the clean. Initially this may be uncomfortable, but this discomfort will subside as long as you're consistent about using this grip.

Learning the clean from a hang above the knee position makes the learning process easier. After you're able to consistently perform the movement correctly from the hang position, you can begin learning the movement from the floor. 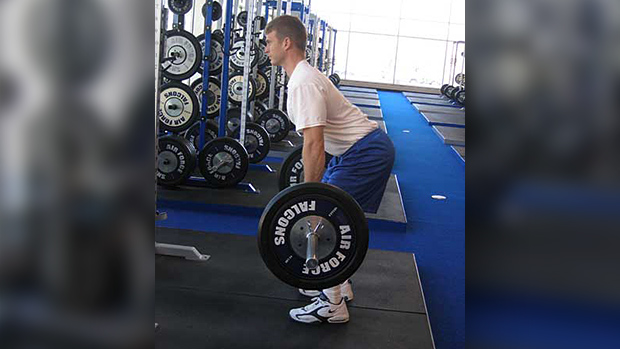 Establishing the correct start position from the hang requires you to first set your foot and hand position correctly and then lift the bar above the knees by deadlifting the bar to the mid-thigh. At this point, slide the bar down the thighs to a position just above the kneecap. The head should be up, the back arched, and the shoulders slightly forward of the bar.

The most common mistake at this point is to place yourself in a position where the shoulders are behind the bar. When you attempt to fix this position, the usual mistake is to correct the position by changing the height of the bar on the legs. Normally, the correct position can be accomplished by reducing the degree of flexion at the knee joints, which causes the shoulders to shift forward of the bar.

Note: Time Requirements at Each Step 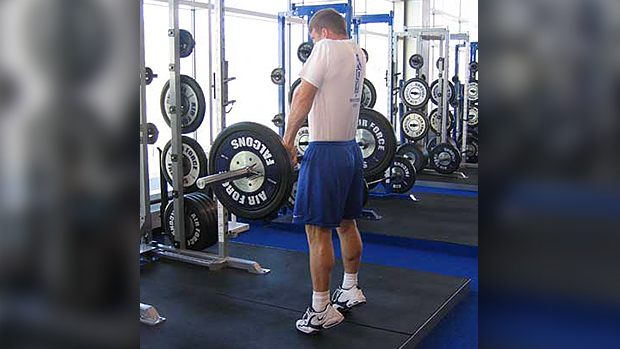 From the start position described in step six, perform a vertical jump so that the hips are fully extended, the back is flat, the head is up, and the heels are off the ground.

At the top position, aggressively shrug the shoulders straight up, keeping the arms straight and attempting to cover the ears with the shoulders. Make sure to not initiate this shrugging action too soon; it should only occur at the top of the jump. 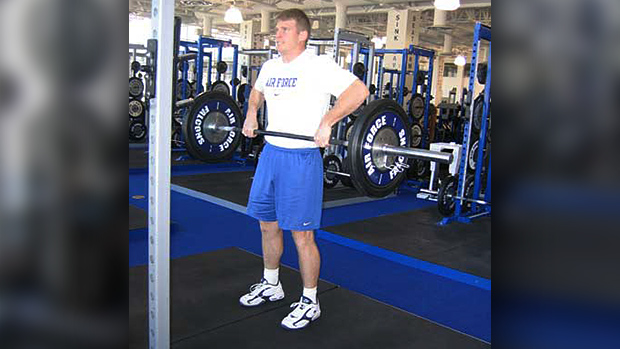 Once you reach the top of the jump shrug position, begin to bend your elbows, keeping them above the wrists and the bar tight to the body while pulling the bar to the navel. 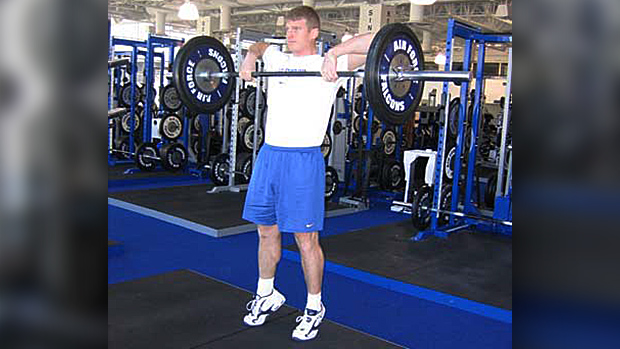 Continue the low pull into a high pull position so that the bar reaches sternum height. Emphasize keeping the elbows over the wrists and the bar tight to the body as it's pulled to the sternum. 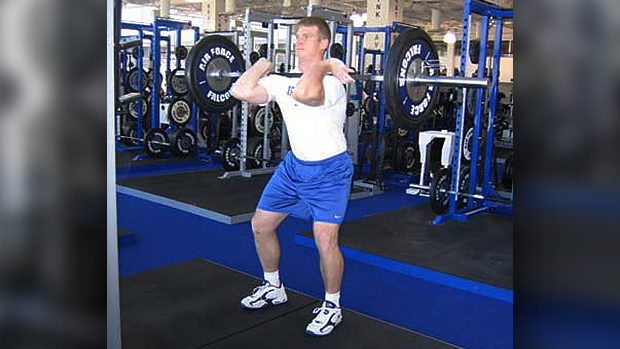 Once the bar reaches sternum height, pull the shoulders under the bar, dropping into a semi-squat position. Sit back into a one-fourth squat position, reaching back at the hips with the heels on the floor and the knees behind the toes.

At the top of the high pull – as you move into a power clean position – the hook grip is released so that the elbows can be brought up high and the bar is caught on the fingertips and deltoids. In this catch position, the head is up, the back is flat, the elbows are high, and the heels are down. 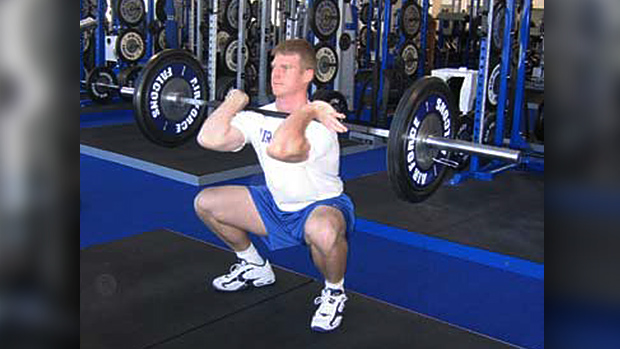 The next step requires you to fluidly drop into a parallel squat position. At the bottom of this position, the head and elbows are up, the back is flat, and the heels are on the floor. At this point return to a standing position, maintaining the upright position just described, and then return the barbell to the platform.

The clean is a complex movement that's difficult to learn. However, by breaking the teaching process down into small steps, the procedure becomes less intimidating and much more manageable. As you become more and more proficient, you'll learn to explode through the movement.

Because of the many benefits you'll derive from performing the clean, the time required to learn the movement is time well spent. Be patient, be consistent, and your chances for success will be greatly enhanced!

Loosen up those hips and fix your lame-ass squats. Here's how.
It Hurts Fix It, Mobility, Squat, Training
Adam Vogel January 12