The Smith machine is the equipment parallel to High Intensity Training. On one hand, it’s been called more dirty names than Madonna on a trip to the Vatican. On the other hand, there are those who vehemently adhere to it in spite of the fact that it’s an inferior way to train.

I’m about as anti-machine a guy as you’ll ever meet, but I’m also open-minded enough to realize that as is the case with most things in life, the answer rests somewhere in the middle.

I’ll be the first to admit that if I was to outfit a training center tomorrow, I wouldn’t put a Smith machine in it. Beyond the obvious injury risks associated with a fixed line of motion on the exercises people normally perform on this machine, it just makes no sense financially.

Why spend $1,200 on a coat rack when I could buy one at Wal-Mart for $19.99 and use the leftover cash to pick up a glute-ham raise, some Jump-Stretch bands, and surprise TC with that Russian mail order bride he’s coveted for so long? 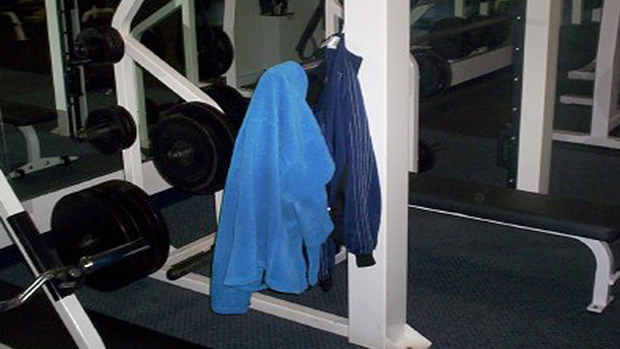 The World’s Most Expensive Coat Rack?

Unfortunately, it’s a moot point, as many gym-owners have already made their purchase and devoted precious floor space to it. That’s not to say, however, that we can’t work with the situation and make lemonade out of rotten lemons. With that said, here are ten ways to make the Smith machine eyesore more attractive:

Mobility is a fundamental prerequisite to all human movement. Unlike the shoulder, which is a ball-and-socket joint designed for mobility at the expense of stability, the hip is a stable joint that is often deprived of mobility, especially in our increasingly sedentary society.

While the shoulder responds well to stability-oriented training, the hip requires significant attention to maintain adequate range of motion and soft tissue health. Mike Robertson and I go into great detail on this topic in our upcoming DVD, “Magnificent Mobility,” but in the meantime, here are some Smith machine options you can use to start to get those hips loose. Perform these movements prior to lifting sessions and on off-days.

Think of yourself as a hurdler on these; really try to “open up the groin” as you maintain good posture throughout the movement. Try to keep the torso upright; if you have to sidebend to get your leg over the bar, lower the setting and focus on working at the hips – not the spine.

Again, keep your chest up and focus on working purely at the hips.

Now, we can start working toward improving your flexibility for squats and pulls from the floor. Keep your eyes looking straight ahead and fight to keep a neutral spine. You can perform this movement with a more upright stance (as with a squat) and higher bar placement, or with more forward lean (as with a deadlift); the video depicts the forward lean version, which requires that you set the bar a bit lower.

We’ll once again increase exercise complexity – this time by integrating the “under” and the “over.” This is not only a great mobility drill, but also an excellent teaching tool for change of direction with athletes. The exaggerated ranges of motion and precise manipulation of foot placement required at a brisk pace can rapidly improve the ability to maintain one’s center of gravity within a base of support.

Notice in the video that the feet are not shuffled at all between the “under” and “over” phases of the movement; it’s just deceleration, stabilization, and change of direction. Most beginners will find themselves so tentative and kinesthetically unaware that they’ll practically be tap dancing.

This is without a doubt my favorite of the bunch, mostly because I’ve never seen anyone other than UCONN’s Chris West and I use it (we like to feel special)!

Virtually everyone has tight hip flexors, poor frontal plane stability, and a complete lack of hip mobility; why not address all these problems in one shebang? You’ll need to reposition your foot as you transition from the duck under to warrior lunge; just make sure that it’s pointing straight ahead as you reach overhead. It’ll take some experimentation to get the foot position down, but you’ll be rewarded for your efforts with healthy hips and improved performance.

In the warrior lunge component, reach directly overhead, push the hips down, and look for a deep stretch in the front of the trailing leg’s hip. You shouldn’t be leaning back.

6.Fixed Bar Extensions (with or without blast straps)

Are you sick and tired of boring extensions and pressdowns? Fixed bar extensions can give you a little more bang for your buck, as they require more core stability and, depending on how you perform them, can recruit more of the humeral extensors (i.e. lats). These can be performed with your feet on the floor or on a bench, and as the movement gets too easy, either lower the bar, put on an X-Vest, or if you’re Greg Valentino after a fresh Synthol dosing, have a few training partners sit on your back.

Another way to increase the difficulty of the movement is to hang from some of those straps people use for hanging leg raises, although you’ll be more comfortable with blast straps, which will also enable you to do suspended push-ups. You can pick some up at Elite Fitness.

Whether you’re training healthy or injured individuals; men or women; or geriatric clients or elite athletes, you can progressively increase the difficulty of push-up variations by gradually lowering the bar toward the floor. Deconditioned, injured, and novice individuals can improve their pressing strength and core stability simultaneously with the push-up at progressively lower heights. Conversely, healthy lifters in pursuit of one-arm push-up glory can build toward their goal in the same way.

I always liked calling these “fat boy pull-ups,” but I’m getting politically correct at the ripe ol’ age of 24, and “horizontally-gifted person pull-ups” just sounds stupid… er, I mean “intellectually-challenged.” It’s tough to get enough horizontal pulling in your program, so if you’re looking for an alternative to barbell, dumbbell, and cable rows, here’s another great way to hammer your upper back. For each of these movements, the easy-to-difficult progression is:

Another option that you won’t see very often that’s just as nice a change of pace is the neutral grip inverted row. For this variation, you’ll need to score a V-handle from a seated cable row machine.

I’ll often use these for isometric holds and shuffle the pronated, supinated, and neutral grip approaches.

When it comes to training for speed, one of the fundamental shortcomings of traditional free weight training is the natural deceleration that occurs at the end of the range of motion. Medicine balls and ballistic push-ups have been used as ways around this shortcoming, but you can only use so much resistance on these movements.

Fortunately, the bench throw complements these other options nicely. Everything is the same as with normal bench press, but instead of holding back at lockout, throw the bar upward. Be sure to have 1-2 side spotters there to help you decelerate the bar as it returns to your hands. Also, be careful to avoid allowing the hooks to catch as you throw the bar; your natural tendency will be to let the bar roll a bit as you release, so you’ll need to fight it on your first few sets until you get the groove.

I normally don’t like fixed lines of motion, but this is one instance in which they do improve safety on an effective exercise. To give you an idea of what kind of weight to use, Newton et al. (1997) found that peak power output with bench throws occurred in the 30-45% 1RM range (1). Be sure to factor in that Smith machine bars are substantially lighter than regular barbells (contrary to what you’ve heard from the self-conscious wussies who always bench, squat, and upright row in the Smith machine).

Here’s a good movement for teaching proper initiation of the posterior chain and enhancing sprinting speed. Wrap a Jump Stretch band over the bar; the higher you set the bar, the more tension you’ll have on the band. Your set-up shouldn’t put you in a position of having to strain like crazy to stomp the band; it’s more important to be able to feel the hamstrings and glutes kicking in as you rapidly extend your thigh.

It shouldn’t be an exaggerated backward stomp; the band should graze the front of your hip at the end of the range of motion. Allow the band to pull you back to the starting position after each rep and then rapidly stomp again. You can do this for individual reps at a controlled pace if you’re just teaching activation patterns, or you can shoot for as many reps as possible in a certain period of time (you’ll need to be fast). 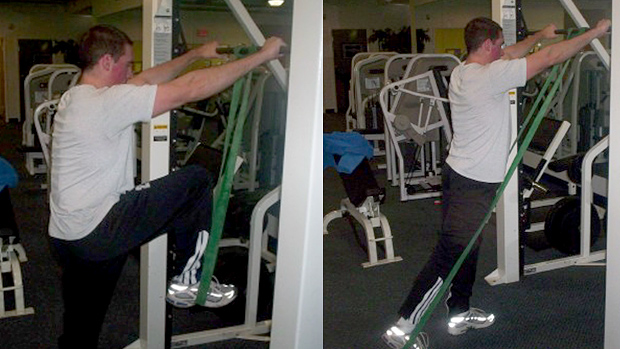 Regardless of the method you choose, there is NOT lumbar hyperextension; the torso remains upright and the thigh extends. If you’re hyperextending at the lumbar spine, it’s likely a compensatory movement to gain range of motion lost due to tightness of the hip flexors and weak glutes.

You’ll note that with the exception of bench throws, you can perform all these movements with a regular power rack and barbell. The value of a Smith machine, however, is ease of conversion from one height to the next. With hurdle drills in particular, you’re going to be cycling through a variety of different bar heights, so it helps to be able to adjust on the fly to keep your session going smoothly. I’d still rather spend my money on other stuff, though.