Combination exercises have a bad reputation among serious lifters, but not all of them suck. The good ones hit more muscles, make you train at a higher heart rate, and force you to expend more calories.

Why Most Combos Don't Work

Think of the lunge with a bicep curl: a popular combination exercise featured in every mommy-blogger routine. Sure, it'll help burn some calories, but since when should the weight you use for bicep curls be the same as it is for a lunge?

Common combination exercises attempt to kill two birds with one stone. But in reality, all they do is kill one bird and partially wound another.

Effective combo exercises do a better job at matching exercises so that each one is more evenly stimulated by the same weight. They also add variety and help you build some athleticism while keeping your heart rate up.

If your single-leg strength and stability need some work, then combining reverse lunges with a single-leg RDL would be a great way to start.

Adding a deficit to the reverse lunge upgrades the difficulty, but you can always start without one. You can also go the other route and use the deficit for the deadlift component too, if you have the range of motion.

The horizontal nature of this exercise can help you develop athletic speed and help you prevent hamstring injuries. If you're just after aesthetics though, this has you covered too. Develop that glute and upper hamstring area (some call it the "glute-ham tie in") and get a great butt pump with this killer exercise.

This one has many names, but we'll call it a "lawnmower" since it loosely resembles starting up an old lawnmower... albeit one that needs some forceful encouragement to get it going.

The combo is highly transferable to athletic movements too, teaching an efficient lower to upper body power transfer. You'll recognize the hip snap on the back leg in many power-based sports.

To nail this lift, think of it kind of like a sumo deadlift mixed with a high-pull that goes into a rotational press. You'll burn a ton of calories while satisfying your inner athlete.

Both reverse lunges and split squats work similar muscles, but the joint loading mechanics differ. During reverse lunges, the hamstring of the lead leg also contributes to a "braking" effect.

In general, split squats are a regression of reverse lunges, since you have a better opportunity to reinforce hip, knee, and ankle mechanics in a more controllable position.

Combining a split squat with a cable or band row increases the quad loading on the lead leg since the force is pulling you forward. The row is also a good opportunity to hit your back without adding too much complexity.

You can add the row in at the top of the movement or, for more difficulty, add it while holding the bottom position.

You'll get a lot out of these if your job requires you to sit all day. While the split squat will help open your tight hips, the row will combat hunched-over shoulders. Try these to combat your gorilla posture while smoking your quads.

Split squats can be progressed into rear-foot elevated split squats (RFESS), emphasizing greater load on the lead leg. Kind of like in the previous exercise, you simply add a horizontal row. But on this one, you reach forward and add more load through the hips, which is somewhat of a deadlift-squat hybrid.

The reach forward will also load your lats more in their lengthened position. So as you hit the bottom and reach, you'll be emphasizing hip engagement and a stretch of the lats. As you come up, you'll be targeting mid-back and quads. The height of the cable can change the feel of the exercise too, so feel free to play with it.

This exercise is the definition of "bang for your buck." It's got a moderate-high complexity, but with a high return. If you're looking to hit it all, then grab a cable or band and give them a go.

Staying with the RFESS theme, here's another way to use them to hit your entire lower body. This one is starting to make its rounds in corrective exercise circles as a more complex rehab progression. As a combination exercise to hit your quads and hamstrings, it'll really light up some weaknesses.

Box step-offs are a good way to load a squat pattern while moving in the frontal plane. There are many options too. You can use a landmine, dumbbells, kettlebells, or a goblet position. And, of course, you can use them to build big legs.

Combining box step-offs with another deficit exercise – a reverse lunge – will hammer your lower body even harder. Granted, in our "killing two birds" analogy you're really just killing the same bird twice here. But if you're looking to add some variety to your lower-body training and change up the direction, these will get the job done.

Research has shown that one set of a single-leg exercise can burn the same number of calories and activate the same (or more) muscle as one set of heavy bilateral exercise. Sounds crazy, right?

For example, McCurdy showed greater hamstring and glute muscle activation in RFESSs versus back squats when the same relative load was used (1).

Single-leg exercises achieve this with less absolute weight and less load through the spine. That's not necessarily to say lunges and split squats are better than back squats, but going unilateral has its benefits.

A landmine is a comfortable way to load a reverse lunge. Combining it with a shoulder-friendly press makes this combo a winner. The press can be added at the top of the lunge or at the bottom for more of a challenge.

These make a useful addition to any full-body circuit. Compound rows are best done with resistance bands and a hip hinge. The band can go anywhere between floor and waist height depending on where you want the most load. You can also row with one or two arms at a time.

Typically, a compound row is done on two (parallel) feet. But by using a "kickstand" stance you're essentially combining the row with a slightly supported single-leg deadlift. The back "kick" foot has very little load going through it, but just enough to allow sufficient loading with the band. Try these to fire up your entire posterior chain.

A reverse lunge to a shoulder press is common among kettlebell circuits. The problem? Your lunge is often stronger than your shoulder press. For that reason, simply adapting the exercise by lunging back with two kettlebells and pressing with one gives the exercise a better profile.

Having both kettlebells in the racked position further challenges your core. To make it even harder, you can use an uneven kettlebell weight. In the forward leg on the lunge, pick a heavier weight according to what your lower body can handle. Then for the pressing hand, choose a weight aligned more with your pressing strength. It just makes more sense.

Barbell thrusters are common in a CrossFit setting. It's just unfortunate that so many do them despite their inability to either front squat or overhead press efficiently, let alone piecing the two together. Even for those that can do them right, it's an exercise that often gets sloppy.

Using a landmine means you won't be limited by factors that could otherwise affect your thruster technique. If you have a Viking handle attachment for your landmine then great, but if you don't then hold the end of the bar with both hands. Doing them this way makes it an effective exercise for a variety of reasons.

You'll find it easier to squat because the position of the load and leverage factors. Holding the landmine in front is also easier for those who don't have a good front rack position with the barbell. For those with mobility issues or cranky joints, holding a landmine instead of being passively forced into a front rack position can offer some relief.

The pressing angle of the landmine is also much nicer for those who get shoulder pain from pressing directly overhead.

If you want to combine the benefits of both the squat and the press, or you're looking to develop some linebacker athleticism, give these a try.

Everything marketers have told you about yoga, running, detox, juicing, and even the female Viagra pill is wrong. Here's the truth.
Dietary Myth Busting, For Women, Training
TC Luoma October 1

Thibs lists five reasons why you're not growing (not including the fact that your workout consists of 5 minutes on the Thigh Master you found in your mom's closet). Oh yeah, he also gives some pretty cool quick fixes.
Bodybuilding, Training
Christian Thibaudeau July 11 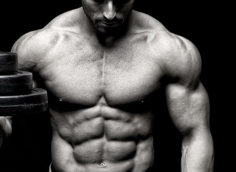 For decades, people have thought that working their abs makes their waist smaller. Is there even a glimmer of truth to it? Info here.
Training
TC Luoma September 23