The Pom Wonderful people have gotten their red-stained hands slapped for making their pomegranate juice sound just a little bit too wonderful (treating heart disease, prostate cancer), but one of their claims – that of giving users rock-hard erections – might have some equally rock-hard science to back it up.

One study purported that pomegranate juice improved erectile dysfunction in 42 men. Several others found similar results. Whether pomegranate does this by improving heart function (and anything that helps the heart and circulation is good for the penis) or some other mechanism isn't completely known.

If you want to experiment with the erection-enhancing effects of pomegranate, drink about 6 ounces a day. Whether you need to drink it a set number of hours before sex is unknown, but drinking it in the morning appears to work fine for those that have sex the same evening.

Keep in mind, though, that the effects may fade after a month or two. If this is true, you may wish to "cycle" it, drinking it every day for a month, taking two weeks off, and then resuming daily doses.

Caution may be warranted on what you combine pomegranate juice with, though. The Urology Annals publication documented three cases of men who suffered from erections that lasted between 5 and 8 hours and needed medical intervention to alleviate. The men, ages 46, 35, and 27, used pomegranate together with the erectile dysfunction drug sildenafil, aka Viagra, and found that their erections wouldn't subside after sex.

The doctors that authored the report theorized that pomegranate juice blocks two enzymes (CYP3A4 and CYP2C9) that are involved in the metabolism of Viagra. Knock out these enzymes and you make your dose of Viagra much more potent, as demonstrated by the three preternaturally hard patients.

While another juice, grapefruit, isn't touted as having any special erection powers on its own, it does inhibit some of the same enzymes that pomegranate does, which means that grapefruit juice also supercharges the effects of Viagra (and many other drugs, too).

Conversely, it's possible this combo might work rather well, if you catch my drift, but it does run the risk of getting an erection that just won't quit. Similar caution might be warranted when using grapefruit or pomegranate juice with pro-testosterone/pro-male supplements that list stronger erections as a side effect. 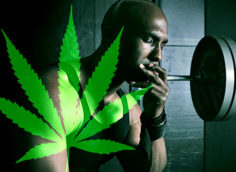 Is it okay for bodybuilders and athletes to use the devil's lettuce, or does it work against their goals? Here's what we think.
Living Better, Opinion, Pharma, TRT
T Nation April 12