I read a lot of research papers about Vitamin D, and some of them fall way short of my expectations: No wow factor. Snore city.

Case in point, one of the studies I just read had to do with vitamin D "awareness" in college athletes (Leitch, 2019). I won't force you to feel the same boredom I felt while reading it, but they found that while most college athletes were somewhat aware of the importance of vitamin D in health and performance, most expressed little concern for their vitamin D status and risk of deficiency.

Maybe that helps explain, at least partially, why another study found that at least 56% of athletes around the world have inadequate vitamin D status.

But let's get back to the current study, the boring one, for a sec. It went on at great length trying to figure out why these college athletes are so blasé about vitamin D. The answer is probably as simple as the athletes know very little about vitamin D's effects and even less about successfully bringing vitamin D blood levels up to an optimal range.

Even so, the authors balked at dipping more than a little toe into the vast, chilly, Olympic-sized pool of vitamin D ignorance.

Let's assume, though, that the paper somehow created a vitamin D groundswell among college athletes and most of them started popping vitamin D capsules, eating calf liver fajitas, and creating boatloads of memes that glorified vitamin D rich sardines.

That would all be positive stuff, but it might not do much to universally elevate vitamin D levels to where they should be. Here are some reasons why:

The main reason college athletes, athletes in general, and even regular folk are deficient in vitamin D is likely, first and foremost, the aforementioned ignorance about its benefits.

I have to think that any sane person who knew the advantages of the vitamin would go to great lengths, even offering up their collection of still-boxed Star Wars figurines, if they could automatically acquire higher levels. Consider the following effects of having optimal levels of vitamin D:

But even if the average athlete or person was on board with of all of that and decided to assume responsibility for their vitamin D status, they'd have a number of hurdles to overcome.

It's a Wonder We Get Any Vitamin D at All

The best way to fortify vitamin D levels is the natural way, i.e., lying buck naked or virtually buck naked in the sun at least twice a week for 20 minutes. It'd be even better if you could rig up some device to make you spin like a rotisserie chicken, thereby exposing all your bits to the sun.

This practice (lying in the sun), however, has largely fallen by the wayside because of legitimate fears of skin cancer. Even if we do venture out in the sun regularly in varying degrees of nakedness, most of us wear sunscreen, which blocks the skin's ability to convert UVB radiation into vitamin D3.

Besides, a huge percentage of people live at the "wrong" latitudes and only get therapeutic amounts of sunlight a few months out of the year. So scratch that.

What about eating a lot of vitamin-D rich foods? It's a seemingly logical course of action, but it too has its shortcomings. For one, there aren't that many naturally-rich vitamin D foods. Aside from eggs, cod liver oil, certain fatty fish in general, some algaes, and a few variety of mushrooms, vitamin D is generally in short supply.

Besides, the total amount of vitamin D (both D2 and D3) found in a food during chemical analyses doesn't reflect its bioavailability since a lot of the vitamin is bound up in the actual food and remains so after you eat it. Lots of things contribute to this: the physiochemical form of the vitamin D, the fatty acids and fibers in the food, the size of the food particles themselves, and the quantity of the vitamin itself.

Unbeknownst to most, vitamin D has a partner of sorts. If its partner isn't around, it doesn't go to work – it won't even get off the couch, let alone brush its teeth and put its pants on. This partner is the mineral magnesium, which is already largely deficient in the typical American diet, so much so that some surveys have calculated that 85% of American are lacking in this super-important mineral.

Athletes generally have it even worse because magnesium hitches a ride on sweat, and the more you sweat – as you might in any athletic endeavor – the more magnesium-compromised you are and the less probable it is that your body will transport, synthesize, and activate vitamin D.

What About Vitamin D Supplementation?

Next to the now-declared dangerous practice of lying in the sun, supplementation is generally the most efficient way to up your vitamin D game. The trouble is, vitamin D supplements manufactured in the traditional manner are prone to all the same manufacturing and absorption problems attributed to vitamin-D containing foods – moisture, oxygen exposure, and non-optimal storage conditions.

I've seen the repercussions over and over again – even experienced them personally. You take the initiative and try to elevate your vitamin D levels to optimal blood levels (at or beyond 50 ng/ml or so) and start popping conventional capsules and grimacing down sardines and whatever for weeks or even months and nothing much happens. Levels don't budge.

Recent technological advances have changed all that, though. The only form of vitamin D3 worth taking is microencapsulated vitamin D3. This form of the vitamin is manufactured by encapsulating vitamin D3 molecules in liposomes or solid lipid nanoparticles.

The vitamin then presents as tiny "beadlets" and is protected from moisture, oxidation, pH, temperature, and mechanical forces. The microencapsulated product is stable, water dispersible, and, most importantly, highly bioavailable.

Studies show that the effects of this form of vitamin D3 remain constant for up to 14 days, making it clearly superior to the conventional vitamin D3 supplements that comprise most of the market. People who use it have reported rapid and impressive increases in blood levels of vitamin D3.

Biotest immediately recognized the value of this form of vitamin D3 and incorporated it into its I-Well™ Immune Support product. Each 3-capsule serving contains 5,000 IU of vitamin D3 (as choleocalciferol), along with 400 mg. of beta-1,3-glucan, 400 mg. of EGCG, and 400 mg. of solid lipid curcumin particles, each with its own immune-boosting properties. 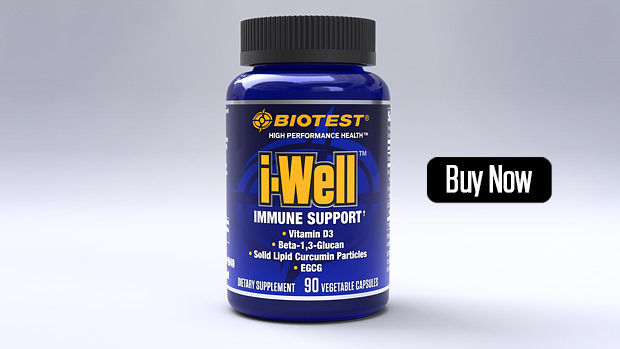 (These latter two substances work together with vitamin D to convey a host of beneficial effects on the human body, mostly in the form of immuno-enhancements.)

Using this form of vitamin D3, in conjunction with adequate dietary or supplemental magnesium (at least 300 to 400 mg. a day) would surely stop this dietary epidemic of low vitamin D levels among athletes and regular folk and stop it fast.