Practically any one who's been training for any appreciable length of time–with his or her mind actively engaged–has probably realized that there's a very real link between body comp and hormone levels.

Sometimes, no matter how careful you are with your diet or how many calories you burn, you still look, well...crappy.

You may be lean except for a noticeable round little belly that shakes when you laugh like a bowlful of...well, you know. Or you may look magazine-cover ready except for some maddening fat around the side of your waist. Maybe worst of all are the occasional flabby pecs, which, in your case, might be a charitable term for man boobs.

Some of that may well just be genetic, an awful legacy left by your genetically imperfect parents.

Or, it could be, as many of us in the biz have deduced through the plain old scientific method, a logical result of hormonal imbalances that could, in some cases, be easily remedied by the right dietary or supplement protocols.

The person who's fine tuned this thinking to its zenith is Charles Poliquin, who's successfully applied his Biosignature Modulation protocol to thousands of happy clients.

This gives Poliquin a clear idea of which supplements and dietary protocols are needed to fix the client's particular body comp problems. 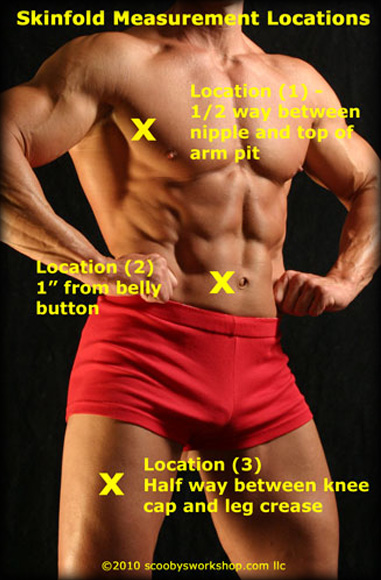 Poliquin considers the triceps to be the mother site as it serves as the reference point to all other sites. Simply put, the thinner the skin on the triceps, the higher the androgen, or Testosterone levels. In fact, he considers it so accurate that he states that a surefire way to tell if a woman is on steroids is if her triceps score is below 6mm.

That's a controversial statement, but it makes a valuable point.

Poliquin would then prescribe an estrogen protocol to lean that lifter's legs up.

Poliquin's brainchild is a valuable tool. The only drawback is that Biosig practitioners are few and far between. They also want money for their services, the capitalist bastards!

But like I said, many of us in the business have long practiced a primitive form of Biosignature Modulation that's done without precise skinfold measurements. All that's needed is a mirror, a clear pair of eyes, and a certain degree of honest self-assessment.

Let me quickly say that the simple "protocol" I'm about to describe won't take the place of a comprehensive Biosig Modulation assessment. It would, at best, give broad interpretations of possible physique shortcomings. Regardless, it could be just the thing you're looking for.

Are you relatively lean except for that hideous roll of fat perched on your suprailiac? If you fit that profile, chances are you suffer from some degree of insulin resistance.

Obviously, you need to make yourself more sensitive to the effects of insulin and this is quite easy to do. All it requires is a prudent eating strategy, a couple of proven supplements, and a little bit of willpower.

Effects should be noticeable within a couple of weeks.

Are you relatively lean except for a weird paunchy pile of fat on your umbilical region? If you fit that profile, it could be a combination of low Testosterone and high cortisol.

Again, the solution could be very simple:

Effects should be noticeable within a few weeks.

Are you relatively lean except for embarrassing fat storage on your pecs? If you have that problem, you may have an estrogen problem, or Testosterone-Estrogen conversion problem.

Rez-V contains resveratrol, a powerful aromatase inhibitor (meaning that it prevents Testosterone from converting into estrogen). It also contains auroyl macrogol-32 glycerides, a compound that enhances absorption of Resveratrol (and other substances that are hard to digest or assimilate).

Likewise, the omega-3 fatty acid, DHA, found in Flameout®, has been found to be strongly anti-estrogenic. (That's one of the reasons why Flameout, perhaps out of all the fish oil supplements in the world, has been formulated to have a higher concentration of DHA than EPA.)

Adopting these three things, or, at the very least, just eating more cruciferous vegetables, could go a long way in curing your problem. Results should be noticeable in a couple of months.

While these 3 strategies could prove powerful in combating your particular physique demons, be aware that they're for individuals who are otherwise relatively lean but with very specific physique problems. If you're fat all over, the first line of attack is to adopt a sane and wise dietary and exercise attack plan.

But you already knew that. 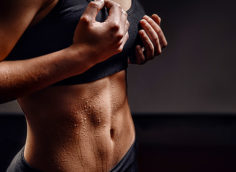 Everything you ever wanted to know but was afraid to ask.
Living Better, Pharma, TRT
Cy Willson January 5