A good percentage of men who are undergoing "testosterone replacement therapy" are fooling themselves. They think they're merely "replacing" the testosterone that has been lost to time and aging. Many of them, though, while they are loathe to admit it, are actually on mild steroid cycles.

Look, by definition, testosterone REPLACEMENT means putting back what was lost – bringing testosterone back to normal or even high-normal levels.

Here's the problem: The average adult male produces 6 mg. of testosterone per day. That is 42 mg. per week. The normal production range is from 5 to 10 mg. per day. Even at the highest production level, we're only talking about 70 mg. a week.

A replacement dose should therefore fall between 40 and 70 mg. a week. Up to roughly 90 mg. would still be within the realm of normalcy. How much an individual man would need, though, depends on many factors, including levels of steroid hormone binding globulin (SHBG), albumin, and aromatase, but by and large, the ranges listed apply to the vast majority of men.

The issue is that many men have cajoled their doctors into giving them 200-300 mg. a week, and that's actually a mild steroid cycle and not testosterone replacement therapy.

It's time for these guys to acknowledge that the great gains they've been making in the gym are often largely due to their faux TRT and not their great knowledge of training or nutrition or their heroic intensity.

I think the problem is that some people automatically assume that if it's prescribed by a doctor, it's legitimate TRT.

I know plenty of guys who went to doctors and were able to get a prescription for 200-300 mg. a week simply by doing some Academy-award worthy acting. They claim they just didn't feel like their old selves on "meager" doses of 100 or 150 mg. a week.

I even know one guy who convinced his doctor to give him a prescription for 600 mg. a week! Regardless, that doesn't change the fact that 200-300 mg. a week is up to 5-7 times the male weekly testosterone production and cannot be called replacement.

Of course, the perception that 200-300 mg. a week constitutes a replacement dose might come from how a lot of doctors prescribe TRT. A very common approach is to give a patient one 200 mg. injection of testosterone cypionate or enanthate every two weeks, causing some patients to conflate that two-week dosage with a one-week dosage.

Some of these problems were initiated by the doctors themselves. They sometimes erroneously prescribe doses that are high because they measure blood levels of testosterone at incorrect or unrealistic times. This may result in a "low" reading, even when doses are fairly high.

Testosterone cypionate and enanthate, the most commonly used versions of testosterone in TRT, have a release time of around 10 days. Hence the original bi-weekly injections.

It's often believed that the absorption is gradual and linear, meaning that the body will cleave off enough of the ester to free 1/10th of the dose per day, thus allowing levels to remain "normal" or "high normal" for 12 days or so.

But here's the thing: Testosterone cypionate is indeed released over 8-10 days, but the absorption rate is very fast for the first four days. After that, it trails off.

See the graphic below from the textbook, "Testosterone: Action, Deficiency, Substitution." Blood levels of testosterone drop dramatically after a few days. As such, if blood levels are measured four days after injection, you get a misleading reading. It's even worse if the test occurs 8, 9, or 10 days later, in which case it will barely be higher than the patient's starting number.

The doctor will likely then increase the dose, and that's another reason why some doctors end up prescribing 200 mg. or more per week. So I repeat, 200 mg. or more is not a replacement dose, but an enhancement dose.

Many bodybuilders or former bodybuilders will often defend their high doses by claiming they don't progress faster than someone who is natural. That might very well be true, but consider the facts.

If you're someone who has been using typical competitive bodybuilder doses of steroids (which are all synthetic analogues of testosterone) like 1000-2000 mg. per week (some take a boatload more) for a significant period of time and then go down to 200-300 mg. per week, you won't be able to build much additional muscle.

However, the simple fact that you can maintain the muscle you have on 200-300 mg. week shows that it's having dramatic effects.

But put a lifetime natural, hard-training guy on 300 mg. of testosterone per week and I guarantee that he will progress much faster than when he was natural.

All this having been said, I have nothing against people who use 200, 400, or even 6000 mg. per week. You can do what you want with your body. And if you're smart about it, you can use testosterone very safely.

All I'm saying is that 200-300 mg. of testosterone is not TRT, and by propagating the belief that 200-300 mg. a week is TRT, we are influencing people's perceptions, which can lead to some of them making bad decisions.

Consider that people who take higher doses have an increased incidence of side effects like elevated hematocrit levels, fluid retention, gynecomastia, worsening of sleep apnea, polycythemia, and possible acceleration of benign or malignant prostatic disease.

Whether that last point is absolutely true remains controversial, but it is something every user or potential user of high doses of testosterone needs to take into consideration.

I should also acknowledge that many men use testosterone patches or gels instead of administering injections. These generally represent more appropriate dosing protocols. Case in point, patches deliver 4-5 mg. per day. Gels are dosed at 40-50 mg. per day, but the bioavailability of the gels is 10-15%, which makes the daily dose equivalent to 4-7 mg. That's well within the realm of legitimate T replacement.

I'm not a doctor, much less an endocrinologist. However, my opinion about what is the best TRT approach sides with the late Dr. John Crisler, which is 7-10 mg. of subcutaneous (injected under the skin near the umbilicus) testosterone (likely propionate) per day.

That roughly equates to anywhere from 70 to 100 mg. a week. That is TRUE testosterone replacement therapy and will bring testosterone levels up to the high-normal range in the aging male. It's unlikely to lead to side effects and will actually be good for your health.

Of course, if you're someone who used high doses of steroids for a long time, this will not be enough to allow you to maintain all the muscle you've built. There is instead a good chance that you will need a "muscle retention therapy" approach rather than a TRT approach. That means possibly using dosages of up to 200 to 300 mg. a week.

Men who are experiencing mild symptoms of testosterone deficiency and who are not ready to undergo prescription TRT might consider an over-the-counter alternative like Biotest's Alpha Male®. Unlike actual testosterone replacement, Alpha Male will not cause your testicles to go dormant. Instead, it will coax your pituitary gland and testicles into making more testosterone.

Either way, my point remains: Men who are using 200 to 300 mg. of "TRT" a week are deluding themselves, and that is my unpopular opinion.

You can learn a lot about life from a strongman competitor, like this important lesson. Check it out.
Opinion, Powerful Words, Strong Words, Tips
Brian Alsruhe June 10 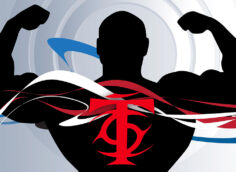 Are you strong? Great! Muscular? Neat! Now make sure you can pass this quick, four-part fitness test so you can live past the age of 50.
Health & Longevity, Living Better
Chris Shugart May 1