Testosterone-boosting supplements sweet-talk your pituitary gland and testicles into making more testosterone, but regardless of how good one of these supplements may be, it'll never be as powerful as actual testosterone replacement therapy where a doctor pokes a needle into your keister.

That being said, testosterone-boosting supplements can work wonders for men who are marginally deficient in testosterone because of age, poor diet, poor sleep, stress, exposure to too many testosterone-draining chemicals, or overtraining.

And, unlike actual testosterone replacement, these T-boosting supplements won't cause your testicles to go on vacation. Instead, they'll make them work harder so that you're just a little bit more male, a little bit more beastly.

Most T-boosting supplements work (if they work at all) in one of four ways:

Taking care of the first pathway to high testosterone is easy: just bone up on zinc and magnesium through nutrient dense foods or take a zinc/magnesium supplement like ZMA®. The other three pathways require a lot more finesse and you'll rarely see all of these pathways addressed in the same T-boosting product. 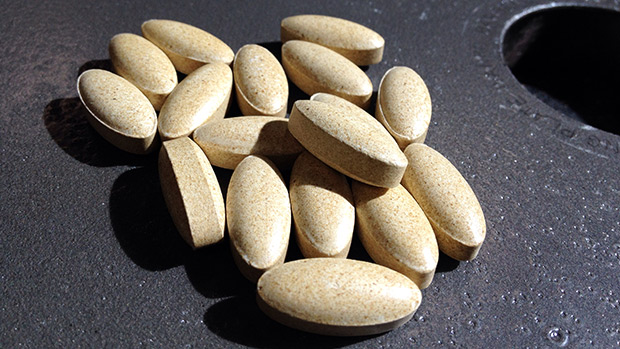 Enter Biotest's Alpha Male®, which contains three exotic, very effective, hard-to-find compounds, two of which are potent testosterone boosters and one of which increases the effects of the other two, in addition to being a particularly effective libido enhancer.

Here's a hopefully not too torturous rundown of each of these three ingredients:

We've long known that this mysterious Malaysian herb elevated testosterone levels, but it was only recently that we learned how. It seems the herbs are rich with two particular quassinoids (members of a biochemically active group of plant chemicals).

When rats, in various studies, received daily doses of eurycoma extracts high in these quassinoids, they experienced a considerable rise in testosterone levels with a concurrent decrease in estradiol.

Chemical analysis showed that it was elevated levels of LH and FSH that caused these effects and that's how it works in humans, too.

A South African study recruited 25 older cyclists, 13 of them male and 12 of them female. (It turns out it works in females, too. Read on.) Each cyclist received 200 mg. of eurycoma every day for five weeks.

Levels of free and total testosterone went up significantly in both men and women. While the testosterone increases in men were apparently caused by elevated luteinizing hormone (LH), along with concurrently lowered estradiol levels, the increase in women's testosterone levels was believed to be caused by a significant decline in sex-hormone binding globulin (SHBG).

That means that the herb prevented the testosterone that women make naturally from being chemically bound up and made inaccessible to the body by SHBG.

In another study, Malaysian scientists gave a standardized water-soluble extract of eurycoma to 320 men suffering from hypogonadism. Prior to receiving the compound, only 10.5% of the men didn't have any of the complaints listed on the AMS (aging male symptoms) scale and only 35.5% of them had normal testosterone levels.

After the study concluded, a hefty 71.7% of them stopped having complaints related to low T and a staggering 90.8% were found to have normal testosterone levels.

But eurycoma's got other talents, too. It also selectively controls the conversion of DHEA and other androgens to testosterone. That means it also works independently of LH. As long as the substrate hormones are present (and they're present in everyone), conversion to testosterone occurs. 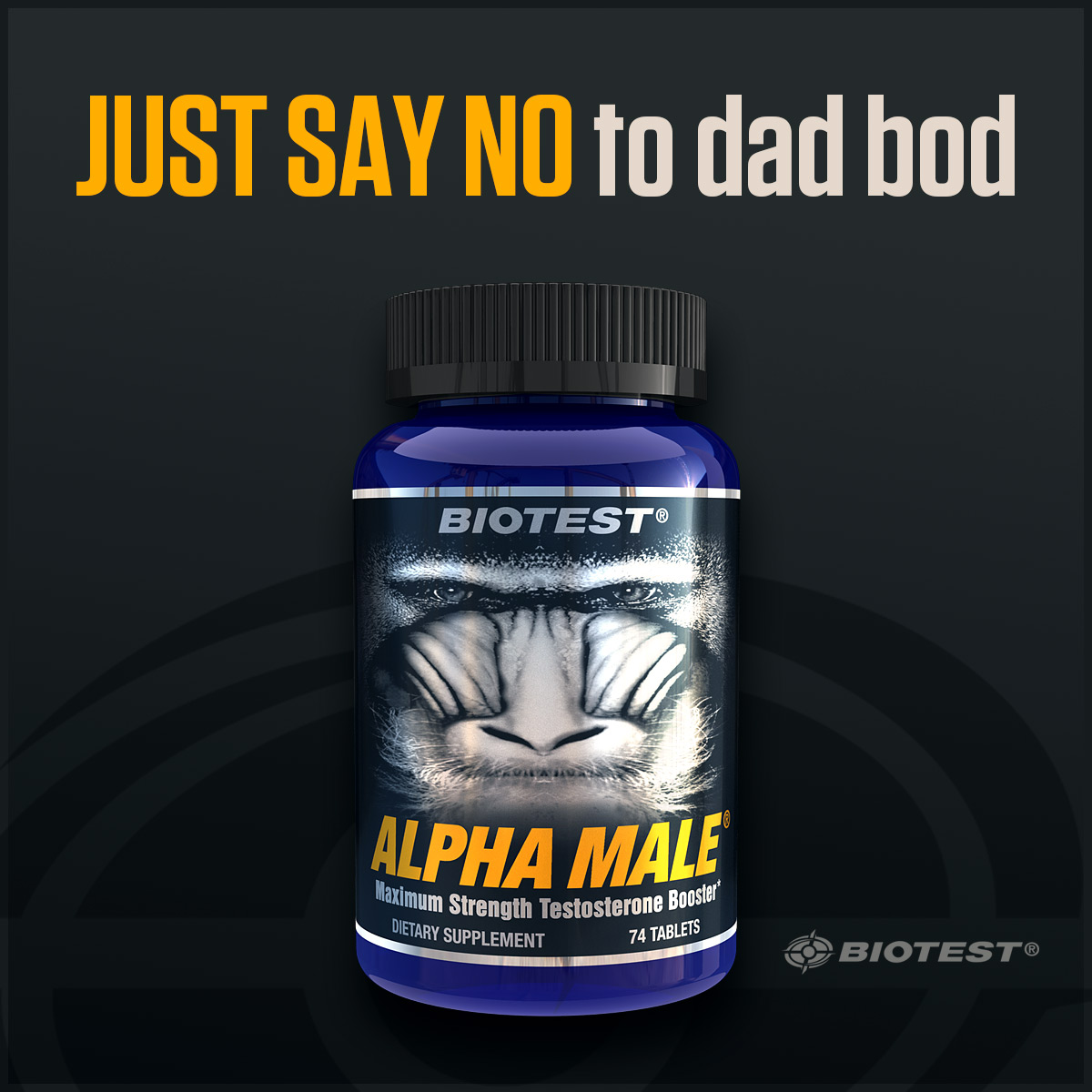 This plant polyphenol comes from the roots of the Indian coleus plant and it's a true supplement superstar. Not only does it dramatically increase testosterone levels, it also does a variety of things for the body that you normally can't accomplish without dieting and exercising.

In turn, elevated levels of cAMP can increase testosterone levels, in addition to increasing thyroid secretion of T4 (increased fat burning), breaking down triglycerides, increasing protein synthesis in skeletal muscles, and increasing activation of brown adipose tissue, or BAT (which causes more fat burning, although through a different mechanism).

These effects aren't just hearsay or conjecture, either. Many of those effects have been validated through various studies, the highlights of which follow:

This stuff works so well that it should be the first thing you look for in the ingredients list of any alleged T-boosting supplement.

Tribulus, also called puncture vine, is a small, leafy plant that grows in parts of Europe, Asia, Africa, and the Middle East. It's long been a part of Chinese and Indian medicine, used mainly as a libido enhancer.

Of the three active ingredients in Alpha Male®, tribulus is the most controversial. While it's long been thought to work by increasing testosterone levels, the research has been somewhat inconclusive. While it's definitely been shown to increase androgen levels in laboratory animals, researchers, in most cases, haven't been able to replicate the results with humans.

It may well be a question of dosage, or, more likely, the ill-advised use of unpurified, inactive, or inferior batches of the herb. Many suppliers simply take a mélange of tribulus plant parts (leaves, stems, branches) and add the presumably active ingredient, protodioscin, to the end product, but that sure as heck doesn't work.

Instead, efficacy is highly likely to depend on some complex, yet-to-be figured out interaction between protodioscin and the numerous other phytochemicals in the plant.

Regardless, what has been proven over and over again in the lab is that tribulus enhances androgen receptor density in the brain (and possibly muscle tissue, too). That means that any testosterone churned out courtesy of eurycoma or forskolin has a lot more roomy places for it to park and do its stuff. It also explains the proven libido-enhancing effects of tribulus.

Okay, maybe you skipped all that sometimes-boring dissection of the science behind the three main active ingredients in Alpha Male®. I don't necessarily blame you. But do at least absorb the following:

Each serving of Alpha Male® contains 500 mg. of a full-spectrum extraction of Bulgarian tribulus terrestris; 100 mg. of genuine Malaysian eurycoma longifolia; and 20 mg. of purified forskolin that was chemically altered (to form forskolin 1,9 carbonate) to extend its bioavailability from 4 hours to about 12 hours.

These dosages are all based on the best available scientific literature as to which amounts would produce the optimal results in human males. 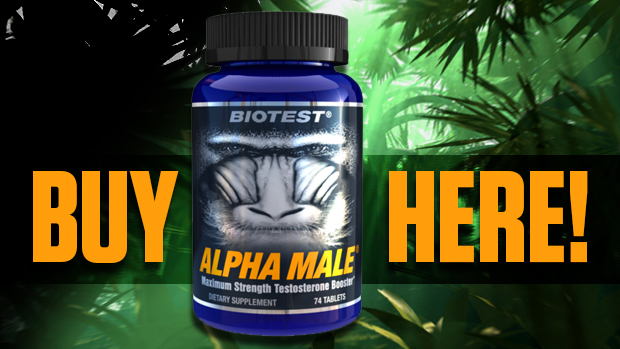 How Do I Use Alpha Male®?

On non-workout days, take 1-2 tablets in the morning and 1-2 tablets 6-8 hours later, each time on an empty, or pretty much empty, stomach. Don't take more than four a day.

On workout days, take 1-2 tablets 60 to 90 minutes before training and a second dose right after your workout. This method takes advantage of the increased androgen receptor sensitivity that happens as a result of intense exercise, and the more testosterone you can "throw" at those newly sensitized androgen receptors, the better your results, muscle-wise.

In general, though, try to use Alpha Male® in cycles of 5 days on and 2 days off. Give it up to 4 weeks before judging its efficacy (which is about the same time you'd want to give actual testosterone replacement therapy before deciding if it did what you expected).

You may, however, because of advancing age or declining health, reach a point where Alpha Male® is no longer working as well as you like. At that point, you may want to explore pharmaceutical testosterone replacement.