Here’s how it happened for me. Sophomore year of college, mandatory PE class, body fat testing day. I stood there with my shirt off, burning with embarrassment, while a cute co-ed attempted to pinch the big rolls of fat around my waist. No one needed to “fat shame” me. I fat shamed myself.

How did I get this way? I’d gotten in pretty good shape in high school. But in the three years that followed I’d fallen apart: no training of any type coupled with out-of-control eating habits. I was a sloppy mess.

Standing there with my shirt off I felt humiliated, but I really didn’t need to worry: I was invisible. Paradoxically, that’s what being fat does to a person. The fatter you get, the more socially invisible you become, especially to the opposite sex.

Our bodies reflect who we are, what we think of ourselves, and how we feel toward others. Your physique is your message to the world, the first message people will hear when they meet you… perhaps even the loudest message. My body was telling people I was lazy and stupid. I wasn’t, but that’s what I was projecting.

I snapped. That’s the best way to describe it. Later that day I looked at my reflection, swore at myself, and smashed the mirror with my fist. The burn of embarrassment turned into a spark of rage. At that moment I went inward. Four months later, I’d lost 70 pounds. I’d been consumed in the fire and reborn.

I’ve been helping people with their training, nutrition, and supplement plans over 15 years now. The pattern of success is clear. Regardless of their primary physique goal – rapid fat loss or massive muscle gain – those who ultimately succeed always begin the same way: they get pissed off.

That’s the first stage of what I call Phoenix Theory. In mythology, the phoenix ends its life-cycle by bursting into flame. From its own ashes, the fiery bird is reborn.

I’ve always been fascinated by the psychological nature of “physical rebirth.” Why is it that some people can lose fat, build muscle, and get healthy while others struggle their whole lives and never get the body they want? Some never even get motivated enough to try. It’s not ignorance. People know they need to train hard, and they generally know what foods to eat and which ones to avoid.

Let’s identify the pattern of success found in those people who’ve made radical, permanent improvements in their physiques – the phoenixes of the bodybuilding and fitness world. What is the impetus of major physical metamorphosis? How does it become a lifestyle instead of just another yo-yo diet and stalled-out training program? How do you spot the catalyst that begins the process, use it, and perhaps even create it?

Those who make jaw-dropping physical changes usually follow the same basic path. Their achievement leaves a trail, and you can follow it… if you dare. You see, with all great successes comes a dark side.

Rise of the Phoenix

Let’s break it down.

My traumatic event was having my body fat tested. It was humiliating and it shook me out of a pattern of dietary self-destruction. But traumatic events will vary according to the individual and his or her physique problem.

An overweight person may see a photo of himself that provides a blunt reality check. A skinny guy who thinks he trains hard might get asked by a beautiful woman if he even goes to the gym. A female might get asked how “far along” she is when she isn’t even pregnant. A middle-aged man could get a scare from his doctor.

Most people walk around in a willful stupor when it comes to their body and their health. They know they’re too fat, too puny, or otherwise out of shape, but they choose not to think about it too much. If they do think about it, they quickly rationalize, make excuses, and push the thought out of their head.

The traumatic event has to be powerful enough to shock them back to reality and sever the downward spiral of physical decay. Because of this, a breakdown of sorts is experienced. I punched a mirror in an act of self-disgust. Others may break down and cry. But this breakdown isn’t a negative experience; it’s merely the first step toward change and transformation. Remember, before the phoenix is reborn, he must first burn.

Although the end of the path is a positive physical change, the process – especially this first stage – isn’t always pleasant, but it’s a necessary part of rebirth.

Now, if you haven’t organically experienced this dramatic event and awakening, is it possible to create it artificially? Yes. All it takes is a few selfies.

It’s amazing how we can look in the mirror daily and yet never really see ourselves. Photos usually cut through the ego-defending mental blocks. So, take off your shirt and take three photos of yourself: one from the front, one from the back, and one from the side. Do not suck in, flex, or manipulate the lighting. This can be a painful (and necessary) reality check that sparks the fire of change.

Usually though, this first stage of the Phoenix Theory occurs naturally. Something just happens to wake you up from your psychological slumber. Recognize it and take advantage of this powerful catalyst. Savor the flame.

Stage #2: Anger and the decision to change

People who lose a lot of fat and build a lot of muscle don’t do it accidentally or in a half-ass manner. No one has ever made a radical physical transformation by “kinda sorta” wanting it, “watching” what they eat, or “trying” to exercise more.

Remember, the phoenix dies in fire and is reborn in fire. Self-directed anger is your fuel in this process. You must get mad, combust, and feed the fire until you break the old habits and rebuild new ones relevant to your physical goals. This is often the difference between those who succeed and those who don’t. The unsuccessful person has a weak moment in his diet, makes an excuse, and gives in to the craving. The successful person gets mad at himself, stokes the fire, and stays strong.

The same thing can occur in the gym. The person who hasn’t begun properly and hasn’t set himself on fire will find plenty of reasons to avoid the tough exercises and rationalize laziness. The phoenix – the person who has burned away all his previous excuses – will get mad at himself for slacking. He’ll remind himself that he must earn his workout drink.

This is how truly successful people push themselves. They’re not hand-holders; they’re ass-kickers, even if it’s their own ass that needs kicking. They drive themselves, and usually not with positive affirmations. It’s not:

“You can succeed because you’re a winner at heart!”

“The point is, ladies and gentlemen, that anger – for lack of a better word – is good. Anger is right. Anger works. Anger clarifies, cuts through, and captures the essence of the evolutionary spirit.”

Feel it. Feed it. Channel it. Use it. 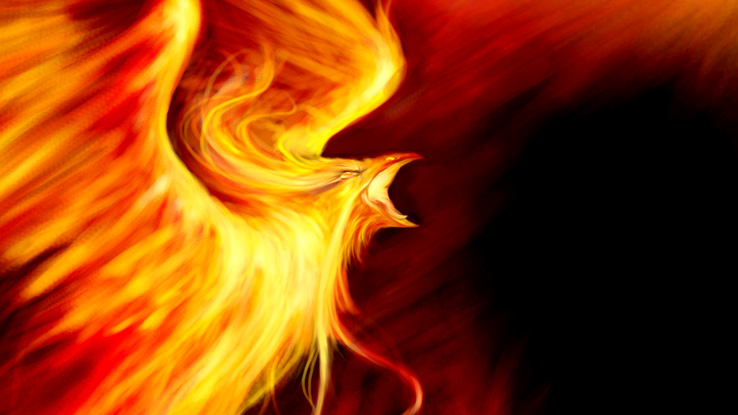 Stage #3: The transformation itself

Fueled by a dramatic event that kindles a fire of angry determination, the next step is the grunt work of the transformation process: the diet, the training, and the lifestyle changes.

This process could take six weeks or it could take six years. The transformation process is ongoing. The most successful people in the gym seldom rest on their laurels and get satisfied with their development. There are always improvements to be made. They never quit or regress because they’re always moving forward toward a new goal: more muscle, less body fat, more weight on the bar.

But there are often setbacks and false starts during the initial transformation. Most people attempt full physique transformations once or twice before finally succeeding. The secrets to mid-transformation continuance and adherence are:

Those who maintain or continue to improve after a physique transformation are often hyper-critical of themselves. Just like using the negative emotion of anger can lead to positive change, having super-high standards for yourself can be a useful tool in maintenance or continued progress. It keeps you on track.

Now, in most legends, the phoenix can’t be harmed by his foes. He can destroy himself, but he can’t be hurt by others. People can be derailed by others during their transformations, but we are, more often than not, our own worst enemies. After all, while other people may distract us, sabotage us, or tempt us, we are the ones who choose to let them.

First, the physically reborn lifter will see the world through a new pair of eyes. It’s amazing how everything changes when you go from fat to lean, or from skinny to muscular. People perceive you differently and they treat you differently. You become not just visible again, but hyper-visible. From sexual relations to how you’re perceived in the workplace, the presentation of a lean, healthy physique changes everything. When someone is rewarded, they tend to repeat the behavior. Once you’ve experienced the rewards of your new body, it’s easy to stay on track.

Second, after seeing both sides of the social world – the fat side and the lean, muscular side – you won’t want to go back to the out-of-shape side. This fear of loss is powerful, probably more powerful than reward.

Adopting an attitude of hyper-accountability is critical to long-term physique transformation. We can learn two things from the mental health and medical fields here. First, if you look at the various psychological disorders, you’ll begin to notice an underlying pattern: the sense of being out of control. That emotion is at the root of a surprising number of conditions, from depression to eating disorders. If a human being doesn’t feel somewhat in control of his environment, well, bad things begin to happen.

Second, the sense of being in control during illnesses has been shown to lead to faster recovery rates. On the flip side, feelings of being out of control lead to a decline in physical condition. In other words, a cancer patient who feels he has some decision and accountability when it comes to beating his disease is more likely to recover. The person who feels a loss of control is more likely to succumb.

In Phoenix Theory, hyper-accountability creates the right mental attitude for long-term success. You are in control. You are responsible. It’s your fault if you fail; it’s your reward if you achieve. Everything counts: every workout, every bite of food you take.

This may sound strange or even abnormal, but this is reality. The achievers of the world are often driven by seemingly negative feelings and emotions. In our context here, this “negativity” fuels our physique transformation fire.

Does this make the person who’s achieved his physical rebirth an angry, negative, obsessed person? No. Because the end result is hugely positive: he looks better, he feels better, his social environment changes for the better, his health improves, and he feels more in control of his life. The “negative” emotions – the anger, the fear, and the self-criticism – merely hang around in the background to keep him on track.

Lessons of the Phoenix

Do you want to reach your physique goals? Do you really want to achieve what most people either can’t or won’t?

Then you better get ready to burn.