For many people, the only source of scientific information is the mass media. That's really too bad because they miss out on a lot of interesting findings and cool studies. But what do you think would happen if their favorite newspaper or news program talked about the latest research on steroids? Why, there'd be outrage! That's because everyone "knows" that steroids kill thousands of people every day! Those lucky enough to survive turn into raging lunatics who bust out car windows with their heads and rape anything with an available orifice. Uh, huh. Saw it in a movie once, or was that Fox news? Either way, must be true.

Meanwhile, back in the real world, there are serious steroid studies taking place. These studies can help those who need Testosterone and other steroids for medical purposes, but they can also help those who use these drugs in an intelligent manner for cosmetic reasons. The three following studies have recently surfaced and are all connected in one way or another. I find them interesting and thought others would as well.

Put on your thinking caps. Unlike the typical newspaper article, I'm not going to dumb this info down to the eighth grade level!

This was a double blind, randomized study consisting of 61 eugonadal men between the ages of 18 and 35. Subjects were randomly assigned to one of five groups which were administered 25, 50, 125, 300 and 600 mg/weekly for a period of twenty weeks. This was of course after they'd received a GnRH agonist in order to suppress endogenous Testosterone production.

With that being said, this and other data helps to support the idea that this formation of new muscle is mediated via agonism of the AR (androgen receptor). In other words, those androgens which bind avidly to the AR – when used over a fair amount of time – are more likely to actually cause the formation of new muscle.

Anecdotal evidence somewhat supports this idea as well. Androgens like methandrostenolone (D-bol) and oxymetholone (Anadrol) are well known for having awesome effects in terms of increasing muscle size, but more often than not, they have more of a reputation for "leaving you with little" upon cessation of use. As I stated in my Steroids for Health 2003 article, this seems to account, at least partially, for the differences in terms of retention of gains.

What does all this mean in the real world? It means androgens like Testosterone, nandrolone, boldenone, oxandrolone, trenbolone, A1E and methenolone may also be useful in that regard. On the other hand, androgens like methandrostenolone, oxymetholone and 4-AD-EC may be better suited for hypertrophy of existing muscle cells.

This isn't to say that those latter androgens don't bind to the AR at all, just that the previously mentioned androgens (trenbolone, Test, etc.) are better suited, as they appear to bind more avidly to the AR. Neither am I implying that those androgens which bind avidly to the AR won't induce hypertrophy of existing muscle tissue, just that they're better suited for activation of satellite cells and the subsequent effects leading to the formation of new muscle cells. (1-5)

Androgens Without the Side Effects!

The second study involves compounds classified as SARM's (Selective Androgen Receptor Modulators). Essentially, these are nonsteroidal compounds which are designed to be more tissue-selective in terms of their effects. In other words, these are compounds which allow one to experience the positive benefits of using androgens while greatly minimizing unwanted side effects. Sounds good, huh?

Essentially, these compounds exert their effects by binding to the AR (androgen receptor) and acting as agonists just as a steroidal androgen would (although it's possible there are other mechanisms behind their anabolic effects.) The difference is their tissue-selectivity, i.e., being able to activate the androgen receptor in skeletal muscle while not interacting greatly with androgen receptors located in other tissues.

This study and others are allowing us – Biotest – to come closer and closer to developing a compound whose anabolic activity greatly exceeds its androgenic side effects that you could use a small enough dose to experience the anabolic effects of the compound and not any of the androgenic side effects. This is why studies evaluating these compounds' structure-activity relationship (SAR) are so important.

Here's some additional data from one recent study. Researchers evaluated the anabolic activity of a few of these compounds as compared to Testosterone propionate in rats. One compound was found to be anabolic at a dose of only 0.3 mg/day. Yet, at this same dosage, it had no effect on LH or FSH and nearly zero effect on the prostate and seminal vesicle!

So, with this compound at least, we've got anabolic activity which is equal to or greater than Testosterone, with no suppression of LH or FSH and nearly no effect on the seminal vesicle and prostate. While this is great news, there's still more research to be done before we can reach the point where we actually have a compound which is many times more anabolic than "T," yet has no effect on LH, FSH, the prostate, etc.

As I said previously, these studies tend to tie in to one another in some way or another. Well, with these compounds, it's possible we could have one designed which is purely anabolic and activates satellite cells while having zero (or very close to zero) androgenic side effects. Long story short: worries about blood lipids, BPH, alopecia (hair loss) etc., will be greatly minimized or nonexistent. (6-8) And that's the way, uh huh uh huh, we like it!

This last study involves developing a method of predicting the anabolic response in men administered androgens, or in this specific case, Testosterone. Just like the first study, this one was a double blind, randomized study consisting of 61 eugonadal men between the ages of 18 and 35. Subjects were again randomly assigned to one of five groups which were administered 25, 50, 125, 300, and 600 mg/weekly for a period of twenty weeks. Again, this was after they had received a GnRH agonist in order to suppress endogenous Testosterone production.

The serum Testosterone levels, while important, aren't really a predictor themselves since they're a function of the Testosterone dose employed. So, essentially, you have the dose of Testosterone being the main determinant of the anabolic response in humans. Age appears to have a small role (i.e, 2-5%) so that leaves room for some other possible predictors, which are really up to speculation.

I'm sure the first response from everyone is, "It's genetics" and yes, while that blanket statement will suffice, it's hard to say what the next most important variable would be, perhaps glucocorticoid receptor content, IGF-1 secretion and/or IGF-1 receptor content, myostatin, androgen-receptor content, etc. Nonetheless, this and other data support the idea that the effects on LBM, fat mass, muscle volume (thigh and quadriceps), strength, leg power, hemoglobin, serum IGF-1 and HDL are all dose and concentration-dependent.

The next question is, at what point is this no longer true? Well, it appears that at a dosage of 600 mg/week of Testosterone enanthate, these effects are still dose and concentration dependent. Beyond that, it's hard to say at what dose exactly this is no longer true. While there is of course a point where these effects are no longer dose-dependent, I'd venture a guess that, in most people, once you've gone over 1,000 mg/week the effects are likely no longer dose-dependent. It's pretty rare for these researchers to exceed 600 mg/week so that question may remain unanswered.

I think this also provides further support for the idea that it's unnecessary for one to "work his way up" (pyramiding) in terms of dosages when it comes to anabolic steroid use. (9,10)

There you have it, the latest steroid studies you won't be reading about in the newspaper!

How to use steroids or prohormones safely for long periods of time
Living Better, Pharma, TRT
Cy Willson April 26 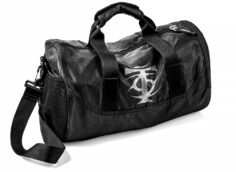 Dump out your gym bag and show us what you carry to the gym. That's what we asked our experts to do. Check out their show-and-tell videos.
Bodybuilding, Mobility, Powerlifting & Strength
T Nation February 23