By most definitions, I've been a success in my chosen field. I've built a career in bodybuilding over the course of 20 years. I've won Israel's national bodybuilding title 5 times. I earned my pro card and had a respectable showing in the Mr. Olympia. Perhaps more importantly, I've coached hundreds of athletes.

But looking back on it, I can see that there are things I sacrificed that weren't worth sacrificing. So when I walk into a commercial gym and see a motivated young kid who'll do anything and everything to get a pro card, my instinct is to sit him down and have a conversation about his goals and dreams.

I want to make damn sure he understands what he's getting himself into. He needs to realize his chances of actually becoming a professional bodybuilder are stacked against him and the path is often ugly and soul draining.

The late Steve Michalik once said he'd drink crankcase oil to get further in the sport, and that was for the Mr. America contest, an amateur competition. I would ask this motivated young kid if he's willing to "drink crankcase oil" to get where he wants to go, because that would be the easy part of the journey.

I'd then make sure he understood the following points:

To do well, you need to become a self-centered asshole. It's the nature of this sport and it's not a matter of "if" it will affect you, but by how much.

Some individuals are more affected than others, but the use of certain "supplements" for an extended period of time will cause profound psychological effects, including changes in personality. You'll experience increased aggression and anger. It may be over something as inconsequential as someone talking too loud or looking at you the wrong way. The most trivial incident might become goddamn HUGE AND ANNOYING.

You'll have no patience, a short temper, and will feel sluggish during most of your day. Simple things will become huge chores. Increased libido will plague you. If you have a girlfriend or spouse, you'll probably end up cheating on her.

If you have any underlying, previously dormant mental issue like OCD or an eating disorder, these "supplements" will make it rear its ugly head and increase exponentially in power.

Depression, anxiety, and shortness of breath will all become part of your daily life. And rest assured, if you're planning on becoming a pro bodybuilder, you're going to need and use a lot of these volatile drugs (there, I said it). It's just another thing that needs to be done in order to compete at the highest levels (the same as every other professional sport, for that matter).

But when you combine all this with an obsession with your body fat and how much you weigh, with looking at yourself in the mirror multiple times a day, and, in general, living a life where every action from eating, to breathing, to sleeping is about improving your outside appearance, selfishness and self-centeredness are inevitable.

It'll affect your personality, and at the end of the day when you leave the gym and the competition is over, these changes don't disappear and you'll still need to deal with life outside of bodybuilding.

To this day, after more than twenty years in the industry, I still haven't met a bodybuilder who's prepared for a show without seriously affecting his or her marriage.

When you diet, you become cranky, tired, and moody. You hate the world. When you diet, the first person you lash out at is typically your spouse – the person who generally provides you with the most support. Ironic, isn't it?

I've seen couples break up, separate, and even get divorced after lousy show preps. The higher the level, the more drugs involved, the more severe the drama. And don't think you'll treat your friends or family any better, either.

The drugs, combined with the brutal diet, the hard training, the cardio, and the final pre-contest week with its dehydration and carb load/depletion will take any bad situation and exponentially increase it.

Anyone who thinks this won't happen to them is naive. You'll do a lot of shows, and if you're actually serious about getting to the highest level possible, you'll use quite a bit of drugs. That's the nature of the sport when competing against the best.

So, is professional bodybuilding worth risking the loss of your closest family members and friends?

The amount of money you'll end up spending while chasing your dream to become a professional isn't something you truly comprehend when you're starting out. The expenses are minimal in the beginning, but as you grow, so do your bills.

And then there's the marketing. If you want to make money, you'll have to sell yourself online and offline. You're just a product like any other and you need to stand out. Maybe you think you can do this on your own, but you won't have the energy when you're preparing for competition. You'll have to hire someone to do it for you.

All of these expenses can add up to the purchase price of a very nice house. That's the cost of chasing your dreams and it gets even worse if your dream is as elusive as a pro card often is. Most competitors chase their pro card for years before they get it – if they ever get it.

And then, just when you get your pro card and start to chalk up all your previous expenses as just an investment you made in your glorious future, you're met with a rude awakening: There's no sponsor waiting for you.

Competition itself doesn't generally pay much either, except to the winner. Most of the time, your winnings won't come near to covering your expenses.

Only if you happen to be very lucky and pick up a few sponsors along the way, and maybe even win a few small shows, will you break even (maybe). You won't become a millionaire from being this type of professional athlete. At best, you'll make a modest to "okay" living. More likely you'll end up broke.

When you begin bodybuilding as a young kid you feel invincible. You don't think about what may happen at 40, 50, and 60 years of age, but there will be a physical price to pay when you commit to the goal of becoming a pro.

Bodybuilding is an extreme sport and the demands and standards for what's considered a winning physique have become harsher and more dangerous in the last few years. The amount of muscle mass, crazy condition, and dryness (getting rid of interstitial water) that's required to win a big show can make it impossible to avoid extreme dieting and drugs. This will impact your health negatively. There's just no way around it.

We beat our bodies up for years. We do insane dieting where we routinely whittle away our body fat to single digits, only to balloon up again in as short a time as a month or two. We use insanely dangerous diuretics to hone our on-stage esthetics. It's all damn unhealthy.

When I weighed 244 pounds at 5'4", walking up stairs left me breathless. I couldn't tie my shoes. Even sex became a challenge. My pursuit of perfection will likely shorten my life.

As negative and discouraging as all this may be, it was important for me to acknowledge the downsides. But there are also many positive experiences and lessons to be gained through this kind of journey.

You'll meet great people. You'll gain inner strength. You'll learn a tremendous amount about your body and mind, along with creating a lot of tools that will make you a more determined, passionate, intense, human being.

By knowing the good and the bad, the next motivated kid who has a dream of becoming a pro might use this knowledge to decide whether this sport and lifestyle are worth the downside.

Maybe he'll decide instead to keep bodybuilding as a hobby that's in balance with the rest of his life, and there's certainly a lot to be said for that.

Is there really an optimal time to hit the gym? A time that would give you better results? Here's what science has to say.
Cortisol Control, Testosterone Optimization, Training
Rudy Mawer July 18
An opinionated look at the men and women whose passion for the iron made the world safe for hypertrophy
Bodybuilding, Opinion, Strong Words
Lou Schuler December 20
A practical guide to physique enhancement with pharmaceuticals
Living Better, Pharma, TRT
T Nation May 10 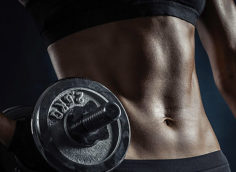