For some reason, lots of guys are mystified by the nuances of gym etiquette… or even everyday manners. Listen, if you wouldn’t do it at home or at work, don’t do it at the gym either. Simple, right? Need a bit more clarification? Here are my top 7 gym rules.

Yeah, I know, that’s the main reason a lot of guys go to the gym in the first place. The problem is, women already have their guards up at the gym. Good-looking women in particular get hit on incessantly and, believe it or not, these women might actually be there to train.

So after an hour of sending the vibe toward your favorite gym hottie, she’s already prepared for your inevitable approach. And she’s highly likely – almost certain in fact – to send you running back to the pec dec with your tail between your legs.

If you love to train, it makes sense that you might meet your ideal match at the gym since it gives you something in common. But it’s all about the approach. I’m no dating coach, but most men are so inept, I might as well be. Slow things down a little and (assuming she’s not wearing headphones) simply initiate a bit of natural, casual conversation.

Ideally, this conversation won’t be focused on her body or even training. Maybe just something mundane like, “Wow, it took me forever to find a parking spot. I wonder what’s going on?” Or, “Did you hear anything about gym rates going up soon?”

Just find a natural subject for an initial (and brief) conversation, and then when you see her again you’ve got a bit of history to build from. Build up slowly. She might even begin to wonder why you haven’t asked for her number yet. This is good. It shows that you’re not too thirsty, too needy, or “one of those guys.”

Never offer advice to anyone at the gym, except for two occasions:

So the next time you see someone squatting higher than what you deem acceptable, or smashing the bar against their sternum while benching, or using lots of body English on curls, just let it slide. For every person you might “save,” there’s a million more you can’t. It’s a losing battle.

Also, you may not know what their training goal is. Maybe they’re purposefully doing overloaded half-reps on the bench press. That’s a legitimate technique many powerlifters use. It’s not always “wrong” (though I admit, it usually IS an ego thing when you see it in a commercial gym).

Going back to my first point about approaching women at the gym, they have a word for unsolicited training advice from dudes: mansplaining. So don’t be that guy.

Wanna know the best way to inspire your gym buddies? Be inspirational yourself. Develop a physique that might inspire people to ask how you built it, and train in a way that others should emulate.

Think about it: Have you ever seen a guy whose physique just blew you away, and didn’t you find yourself curious about how he trains and eats? My advice is to BE that guy. Worry about your own training habits, because there’s a chance they aren’t perfect either.

There’s always “that guy” who’s right on top of you when you’re about to attempt a heavy set of squats or deads. Or that guy who racks his weights on your bench press station as you’re lifting, jarring the bench and getting his big sweaty face into your peripheral vision.

If you’ve never trained truly heavy, you might not appreciate the level of focus it requires to stay safe during an all-out set with significant weights.

If you’ve never been to a weightlifting gym (meaning the sport of weightlifting), visit one sometime. Olympic lifters give a wide berth to anyone about to do a challenging set. Weightlifters would never walk right in front of someone about to attempt a heavy snatch, and in fact, it’s common for the entire gym to stop and pause quietly when someone is about to attempt a difficult lift.

While you don’t need to adopt the samurai-like etiquette of an Olympic lifter, you should be more conscientious of your fellow gym-goers. The gym is a public space after all, subject to the same rules you’d follow at the post office or the supermarket. So act accordingly. 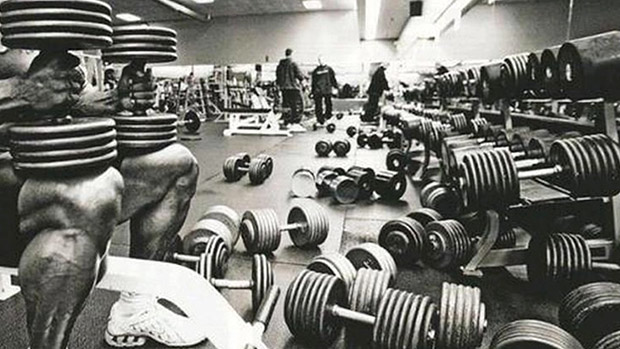 When I was working for the International Sports Sciences Association (ISSA), there was a powerlifter there by the name of Rusty Smith who ritually straightened up the whole gym every day as a warm up for his own workout. I’ll never forget that noble bastard.

No, I’m not suggesting that you do the same, but just for the sake of your own self-respect, c’mon, pick up after yourself, okay? I mean, really.

5 – Don’t Show Everyone How Hardcore You Are

‘Cause you’re not. I mean, sure, if you’re doing maybe a heavy set of 10 on the deadlift, I wouldn’t expect you to lower the plates to the ground over a 6-count without doing a little grunting. After all, I presume you’re not at Planet Fitness. But lots of guys love to turn their workouts into ultra-dramatic displays of theatric barbarity.

I’ve been fortunate enough to witness some of the strongest men in the world during their workouts, and you know what? All of them were absolutely ferocious, but in a relatively quiet, focused way. All that yelling and screaming turns out to be a waste of energy most of the time, so experienced lifters focus their energy inward, not outward.

When I taught martial arts many moons ago, we had a saying: “Better to be a yellow belt with black belt skills, than a black belt with yellow belt skills.” In the gym, I try to embody that same spirit by always trying to be as impressive as I can manage (hey, I have an ego, too, after all), but in as understated a manner as possible.

So no yelling and screaming, no stomping around, no smelling salts, etc. In fact, if you can lift big weights silently, with a relaxed facial expression, it’s actually more impressive than making a spectacle of yourself in an effort to get everyone’s attention.

6 – Master The Art Of Personal Hygiene

On more than one occasion, I’ve had to reschedule a workout because of some dude who smelled so bad I was in danger of becoming ill. As a coach, I’ve often had to quickly re-configure a client’s scheduled workout to avoid a sweat puddle on the equipment we planned on using.

I dunno, maybe shower daily, wear antiperspirant, do your laundry regularly, and wear clean clothes to the gym. Shocking, I know. And guys, take it easy on the cologne.

7 – Don’t Assume The Gym Is Your Personal Photo Studio

I take videos of my lifting fairly often, but I always do my best to make sure I’m not annoying my fellow gym members in the process. At a gym I used to frequent, there were a couple of young guys who approached their workouts like they were on a cinematic production set.

I’m talking lighting, external mics, script rehearsals, multiple takes, and so on. Because, I guess, their 170-pound physiques and ability to quarter-squat 255 was kind of a big deal. Me? I was just trying to get my weighted pull-ups done.

If you’re really the Instagram fitness celeb you think you are, do your filming in an actual photography studio and let the serious lifters train. Just a thought.

Yes, I know, you’re doing a 12-exercise circuit that requires roughly 30% of the gym’s equipment. And yes, you’ve got lots of chatting to do between sets. But here’s the thing: Lots of other paying members are trying to get their workouts in as well. So maybe have a bit of consideration and let them work in with you?

And while I’m on the subject, if you’re doing dumbbell curls, it’d be really cool if you could move back a few steps so others could get to the dumbbell rack as well.

There’s a well-documented personality trait called “agreeableness.” If you care a lot about other people’s feelings, if you often put the other person’s wishes ahead of your own, and if you hate conflict, you’re “agreeable.” Thing is, most aggressive, goal-focused, success-minded guys often lack this trait.

Agreeableness is a mixed bag as personality traits go. It drives you toward personal achievement, but it also makes you more prone to making the social faux pas I’m talking about here. So kudos on your intense work ethic, but maybe do a quick gut-check and make sure you’re playing nice?