You really have to question whether it’s smart to push kids and adolescents towards team sports. They’re authoritarian and by their very nature kill individuality. Even practices are joyless affairs where children are often forced to conform to the dictates of some bloated taskmaster whose self-esteem is based entirely on just how bright his team’s reflective glory is.

Team sports place focus on winning instead of individual performance and the joy of mastering new skills and the confidence and satisfaction that accompanies it. Even team sports with a heavier emphasis on individual achievement like swimming or gymnastics should leave us cold because they place such a heavy emphasis on repetitive movements that have little application in life. Who, besides a human outboard motor, needs to practice the backstroke for thousands of hours every year?

And please, don’t talk about the value of learning teamwork and responsibility and how it carries over to life, because it’s all bull-hokum. All you have to do is watch Sports Center for a few weeks and note the parade of woman-beaters, rapists, murderers, cheaters, liars, and bar room brawlers to realize that it’s pretty murky as to exactly what values team sports ultimately teach.

But there is a viable alternative, something that teaches discipline, self-confidence, and all the things that teams sports purport to teach, and it does it with joy. It’s called weightlifting, and there are many reasons why children and young adults can benefit from it.

The most significant basic developmental task for children is developing self-worth. If they don’t master self-worth, they become self-absorbed instead of self-aware. Witness all the peckerheads walking around who serve no purpose but to diminish the lives of everybody around them.

A lot of male and female insecurity and self-doubt, and the resultant lack of self worth, comes as a result of the physical cruelty of adolescence. Some kids grow tall and gangly quickly, or stay short and chubby, or just plain walk around like they don’t feel comfortable in their body.

And even a lot of the kids who aren’t awkward suffer silently from a distorted body image that’s probably lots worse than reality, chronic anxiety, or being constantly hungry for some internal fulfillment they can’t define. Parents, even if they’re aware of it, usually don’t know what to do about it. They either ignore it, or they throw money at the problem by sending the kid to doctors, counselors, or to the store to buy additional video games (anything to keep junior distracted from his troubles).

Weightlifting, however, can give adolescents a say in their physical destiny and appearance and the part they play in developing self worth. Putting on 10 pounds of form-defining muscle or losing 15 pounds of fat can usually do a lot more than a lifetime of counseling.

2 – Weightlifting can help kids defend themselves.

Being strong isn’t the same as being schooled in kiddy Krav Maga or some other mysterious martial art. Neither does it give a child as much security as having the little darling pack heat, or hiding Oriental throwing stars in their little Underoos before he or she heads out the door to catch the school bus.

Still, physical strength does offer a certain measure of security, particularly in school environments. Strength, like it is in most prison courtyards (and that’s a little what a lot of schools are) is respected. So if the junior high school version of the Aryan Brotherhood, all blond and wearing matching Abercrombie and Himmler backpacks, or the Mexican Mafia with their rub-on Tony “Scarface” Montana tattoos, want to steal someone’s lunch money, they’ll likely pick on weaker prey. 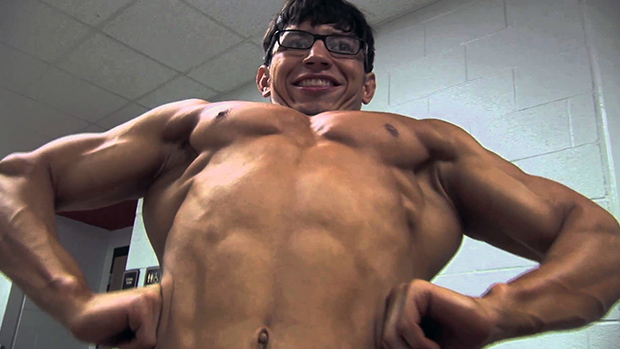 3 – Weightlifting can build a healthier kid.

This one’s a no brainer. Far too prevalent are the kid whose young arteries are already mucked up with gummy bear residue and fragments of Doritos and who have more Sunny D flowing through their veins than blood. Likewise, too many have cholesterol levels and omega-6 to omega-3 ratios that register closer to a bowl of Cheez Whiz than a human. And there isn’t enough calcium in their bodies to make a decent chicken egg, let alone support growing bones.

Lifting makes kids (and other human types) health and food conscious. Food takes on a whole new dimension when you lift; it’s no longer something you put in your mouth to keep it from getting bored while you’re playing video games. It becomes fuel, sustenance. It becomes purposeful, and that purpose is building muscle. You know, kind of like it used to be before grocery stores and chain restaurants and vending machines and wretched caloric excess in general became a ubiquitous part of the landscape.

It’s easy to bond with kids during infancy. They’re cute (some of them), have limited mobility, don’t say too many obnoxious things, and they have needs that are easily observable and are mostly external (food, shelter, having a Go Baby Go Poppity Musical Dino). In other words, raising a baby isn’t much different than raising a delicate potted plant that screams a lot and fills its diaper several times a day.

But most parents aren’t as good in maintaining these bonds when kids get older and presumably more complex. Hell, most parents aren’t that good in recognizing and feeding their spouse’s needs or their own needs, let alone some dark, brooding 12 year old’s. But weightlifting gives you something to share and a way to acknowledge your kid’s effort and achievements, along with his weaknesses, which is hell of a lot more valuable than giving half-hearted universal praise to every achievement, no matter how insignificant. (“You did good getting most of that food in your mouth, Johnny. You did goooood.”)

There’s no avoidance of inadequacies in the weight room because they’re all too easily exposed, whether these weaknesses be sloth, lack of focus, or lack of commitment. You, as an experienced lifter, can show the way and instead of this “do as I say, not as I do” bullshit that invariably leads to contempt, you lead by example and hopefully earn instead the respect and love of the little lifter.

5 – The individual achievement of weightlifting is better for child development than team sports.

Team sports can build up a kid, or they can diminish a kid. Too often it’s the latter. Consider that for every seven or eight decent baseball players on the team, you have one or two guys playing right field or first and batting 8th or 9th who have to consistently hear the groans of their teammates when they come up to bat with the bases loaded. For every eight or nine good players on the football team, you’ve got one or two Rudy types who ride the pine. Tell those guys about the value of teamwork. Phooey.

Then there’s the whole concept of winning, which becomes more ambiguous all the time. So many team games are won not by athletic prowess, but time management. Sheesh. Two minutes to go? Just play keep away. Or fake injuries. Do whatever you have to do, except play the game for which you profess to love. Hell, time management is a skill you should learn in your second year of school at the McPherson College of Secretarial Science. Then there’s the drugs, general cheating, dirty hits, dirty slides, and thrown elbows. Victory obtained by those tactics can’t, or shouldn’t, taste very sweet.

Kids should be told that winning is important in war and legal battles, contract negotiations, cancer, and the lottery, but not really so very much in sports, unless your paycheck depends on it. I’d point out those poor suckers whose attitude on Monday is determined by how their team did on Sunday, no matter what the circumstances of their team’s victory or defeat, and then I’d ask the question: “If your self-esteem or self-worth is based on how you or your team performed, then your self-esteem isn’t really that well developed in the first place, is it?”

Weightlifting, however, doesn’t need a team, a manager, referees, or girls who shake their pom poms and heinies with equal enthusiasm and aplomb. Winning consists of giving it your all and achieving personal goals. It’s personal and it’s satisfying and it’s without moral ambiguity. You quickly learn that no matter how strong you are, that there’s almost always some sonofabitch who’s way stronger than you. If you can’t cope with that reality and you really need to be the “best” at some team sport before you feel good about yourself, find some other activity, maybe one where you can blame your defeats on poor time management.

6 – Weightlifting is a year-round sport.

Lifting doesn’t depend on the green grass of summer, the crisp air of fall, the ice of winter, or any of the arbitrary “seasons” of indoor sports. It goes on all the time. You know, like life.

7 – Lifting may stop your kid from going to the dark side.

Three times in my life I’ve had to say goodbye to kids who were about to enter adolescence. They were kids I had a good relationship with, who I enjoyed kidding around with, who seemed to regard me in the same way. All three laughed or smirked when I told them goodbye, but it was only with a small part of my tongue in cheek that I did so.

But as someone who knows a fair amount of endocrinology and psychology, I knew they were about to enter the “dark side.” That’s how I refer to the age of about 13 to 19 when kids, hampered by raging hormones and its resulting chaotic mind, in addition to constantly trying to control negative feelings, turn to drugs, alcohol, constant mindless partying, anxiously chasing the approval of their friends, or rebelliously and pathetically trying to prove that they don’t care about approval. Oh, and they all suddenly think you and your parents are assholes. We don’t think of it that way, though. We simply call it something polite, like “the generation gap.”

As far as the three kids, I was right. They barely spoke to me once they entered their self-absorbed teens. Two of them made it to other side all right and emerged as semi-decent human beings. The third died of a heroin overdose.

It’d be foolish to say that weightlifting could save all adolescents from entering the “dark side,” but it’s not an entirely foolish proposition. Self-worth, discipline, health, individual achievement, and respect instead of contempt for parents – if they deserve it – sounds like a formula that deserves consideration. 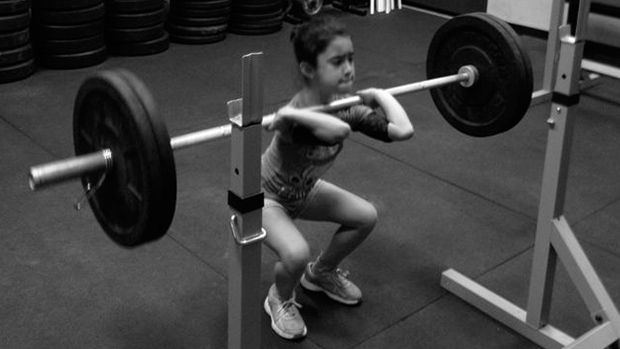 8 – Weightlifting can bring the sexes together.

It’s becoming increasingly common to see the occasional girl competing with boys in baseball or football, but it’s still a relative rarity, worthy of mention in the local news blog. In most cases, young boys grow up seeing that women are generally weaker than they are, and since sports are often everything to a young boy or man, this gender inequality in sports carries disproportionate weight in forming his judgments about women and it likely carries over to the rest of life, too.

Weights, however, don’t recognize gender. Same playing field, same tools. Boys and girls can train together without a hiccup, and sure, while men and boys generally exhibit greater pound-for-pound upper body strength than women, the differences in lower body strength are usually negligible.

There’s a decent chance that boys placed in this situation will start to see girls in a new light, as women warriors who can play an equal part in battling the space invaders when they come to take our planet, instead of delicate, dainty things that need to be protected. Then maybe, just maybe, any future “wars of the sexes” will be restricted to arguing over who forgot to unload the squat rack.