I’m going to venture a guess about what happens when you, a weight lifter, goes to the doctor to get a physical. I’m betting that you almost always get a follow-up call from your doctor telling you that one or more of your lab values are off and that you need to be re-tested.

The doc will say something like, “I’m a little concerned about your (fill-in-the-blank) level. It’s a little high. To be frank, we only see levels like this in terminal cancer patients, people who are moments away from a fatal cardiovascular event, or some poor bastard who’s been head-butted by a steer.”

Okay, he probably doesn’t say anything that scary, but it’s probably what your paranoid mind hears anyhow. Regardless, you’ll have to submit to another lab test, and chances are the retested lab values will come back pretty much the same and your worried doctor will want to pathologize whatever errant blood value you exhibited.

Maybe he or she will run up the bill with some extra tests that all come back negative, but there’s also a chance that the doc puts you on some drug that makes you feel like you’ve been lobotomized and you have to live your days with a drool bucket hung around your neck.

I’m here to tell you that you’re probably not sick; you’re just a lifter, and your body chemistry is a little different from the other animals. Here’s a little reference guide you can whip out in the future whenever you or your doctor are puzzled by your inhuman blood values.

Sometimes what happens before your blood is drawn, or even the very act of having your blood drawn, can yield wacky results, all because you lift weights and have a bodybuilder mentality. 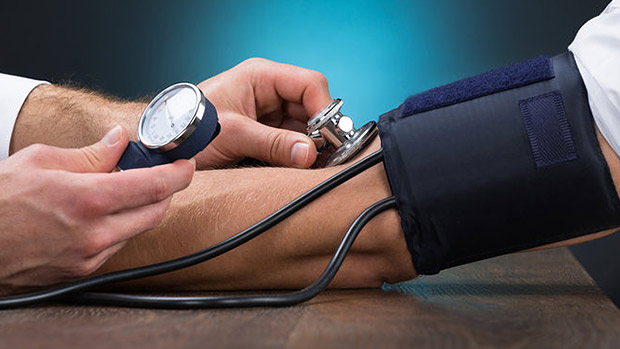 Having Your Blood Pressure Taken

Chances are, your arm circumference is too big for the standard blood pressure cuff and your poor arm is going to feel like a sumo wrestler accidentally sat on it while you were stretched out on a yoga mat.

All the excess pressure ends up jacking up your systolic blood pressure (the first number in the BP reading). A study of bodybuilders from 2009 (Fonseca-Reyes) indicated that the average amount is 8 points higher and that could well be enough to convince your doc to put you on a high blood pressure med, which will likely make you perpetually sleepy, grumpy, and dopey.

To prevent this from happening, sweet-talk the person taking your BP to go into the closet and blow off the dust on the big-boy cuff. Likewise, it’s your responsibility to do the following to make sure you get a reasonably accurate reading: 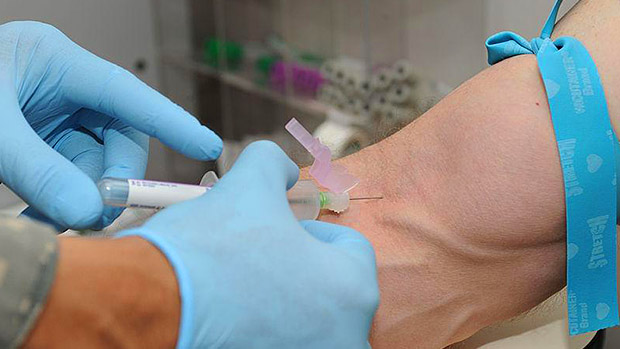 The Blood Draw Itself

You wouldn’t think being a bodybuilder could screw up the blood draw, but it can. It concerns potassium, which is a mineral essential to human life. It acts as an electrolyte and facilitates the movement of muscles, including those that control your breathing and heartbeat.

Having too much potassium in your blood – a condition called hyperkalemia – could be indicative of kidney failure and an impending heart attack, which could cause your physician to have the vapors when he or she sees your blood tests.

The thing is, lifters, particularly bodybuilders, often test false for alarmingly high potassium levels, and the reason is particularly silly. When normal people get their blood drawn, they momentarily clench their fist to make the vein more visible to the phlebotomist. Once the vein is located and the needle is inserted, they immediately relax their fist.

Not so with many bodybuilders. They don’t clench their fist, they roll their fingers into a ball of fury so they can admire the immense, throbbing veins that transverse their arms like oil pipelines across a South Dakota prairie.

And then, transfixed by their own awesomeness, they don’t relax their fist when they’re supposed to; they just keep gawking at those pretty veins. This causes the rupture of thousands of red blood cells during the blood draw, all of which leak their stores of potassium. The resultant skewed lab value will result in a frantic call from the ordering doctor’s nurse, begging you to come in immediately before you drop dead.

To avoid this, don’t be overwhelmed by your awesomeness – relax your fist immediately after the tech inserts the needle. 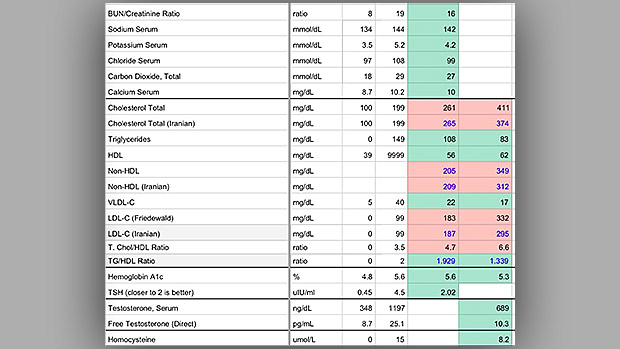 Your crazy weight liftin’, exercisin’, protein eatin’, supplement takin’ lifestyle leaves a diagnostic chemtrail, but when most doctors try to make sense of it, they’re liable to misidentify them as warning signs instead of the ordinary side effects of your physical lifestyle.

Here are the most common blood tests that come up screwy in weight lifters and athletes in general:

Alananine transaminase (ALT) and aspartate transaminase (AST) are enzymes that, when elevated, can indicate liver damage. Unfortunately, your doc probably doesn’t know that even a 15-minute slog on the treadmill can significantly elevate levels of both of these two transaminases.

One old study from 1962 (Fowler) showed that even a short 8K run could elevate ALT and AST levels by 150%. All it means is that the runners incurred some muscle damage during the run and if it happens to goofy runners, just imagine what kind of damage your workout incurs.

As an interesting side note, one researcher (Pertusi, 2007) suggested that elevated ALT and AST levels are why liver damage from the use of anabolic steroids seems so common. The supposed liver damage (suggested by the elevated ALT and AST levels) was actually exercise-induced and temporary, as opposed to steroid-induced and long-term. Regardless, steroids are now thought to be much more damaging to the liver than they probably really are.

If one or both of these transaminases tests high, take a week off from hard training and have your blood re-tested.

Blood Urea Nitrogen (BUN) is a measure of urea levels in the blood and can be indicative of kidney failure. However, a high-protein diet, combined with hard training, increases protein turnover, leading to increased urea production and elevated BUN levels.

An elevated BUN from protein and workouts is nothing to worry about, but your doc may need to be reminded of your lifestyle so he doesn’t freak out.

Elevated levels of this enzyme are often indicative of heart attack, kidney injury, muscular dystrophy, and rhabdomyolysis. Luckily, it probably just means you had a hard workout the day before the blood test. Hitting your muscles hard can cause creatine kinase levels to increase over a 100-fold.

In fact, there are some thoughtful research scientists out there pushing for the lab values of lifters and athletes to be revised. They’re suggesting that “normal” levels be raised from the current < 198 IU to < 1000 in male athletes and < 513 in female athletes.

Until that happens, though, either expect a worried call from you doc after a blood draw, or don’t work out the day before you have it drawn.

But you know what else raises levels of creatinine? Taking a creatine supplement, or ingesting large amounts of beef or other meats high in creatine. This also explains why some creatine naysayers insist that creatine causes kidney damage. They’re missing something, though.

Glomerular filtration rate is used to test how well the kidneys are working. However, a high protein intake, often specifically because of the use of protein powders, can raise GFR, as can creatine supplementation. In your case it’s nothing to worry about, but again, your doc needs to know about your lifestyle.

This test measures the percentage of your blood that’s made up of red blood cells. If it’s too high, it means you may be at risk for stroke. Too many red blood cells, like cars on a freeway, can lead to the equivalent of traffic congestion and a pile up (stroke). Not good.

Unfortunately, anabolic steroids, and even testosterone replacement therapy, can elevate hematocrit to alarmingly high levels. Normal levels for men are about 45% to 52%, while women should test out at 37% to 48%. If your levels are higher than 52% (for men) or 48% (for women), you need to have some blood drawn (to immediately reduce the risk of stroke) and adjust your dosage of androgens downward accordingly.

This test measures the total levels of albumin and globulin in the body. Albumins are indicative of liver function, while globulins are what the body uses to make antibodies. Increased levels of albumin alert your physician to the possibility of liver disease, inflammatory disease, or malnutrition, while increased levels of globulin can result from high cholesterol, iron deficiency, or inflammatory disease in general.

Total proteins can also be elevated in lifters who are using anabolic steroids, growth hormone, or insulin, so it’s best to tell your doc about your extracurricular injections, even though it means being subjected to a lecture about the dangers of steroids (he won’t say too much about the insulin because he probably won’t be able to figure out why you’re taking it).

This is the most confusing of all blood tests, and most doctors aren’t going to give a damn whether you test high or low. Still, truth be told, it doesn’t much matter what your total T is, because testing for total testosterone by itself is pretty much ridiculous.

All your body cares about is “free” testosterone and albumin-bound testosterone, which, while loosely bound, is potentially available to do all the good stuff that T does. Together, they represent “bioavailable” testosterone.

You could also test for SHBG levels and theoretically get an idea of your hormonal status, but SHBG is a tricky bastard. You can be low in SHBG and have “normal” T levels, but still be deficient in bioavailable T.

What time of day you have your blood drawn is also tricky. The current thinking is that you need to have blood tests done early in the morning, unless you’re an old or older bastard, at which point it probably doesn’t matter. In younger men (those under 45 or so), testosterone levels are higher in the morning, probably peaking at about 8:00 AM and reaching their low point about 12 hours later.

Older guys don’t seem to have these diurnal fluctuations, so they can have their levels tested pretty much any time before 2 PM.

What you eat before you have your blood drawn can also affect testosterone levels. Some studies have shown that meals high in fat can drop T levels by anywhere from 15 to 40%. Similarly, high carbohydrate meals can drop levels from 10 to 30% for anywhere from 3 to 8 hours. Even consuming a drink that has about 75 grams of glucose (about what you’d get in one of those “Rockstar” energy drinks) is enough to chop testosterone levels down by jaw slackening 47%.

So it appears that testing should be done fasted, but there’s always a chance that being totally fasted also drops testosterone levels and prevents getting an accurate picture. It’s maddening.

My best advice is this: If your total T, free T, or bioavailable T, or any combination of the three, is low, and you feel like your energy levels, libido, and muscle mass aren’t up to snuff, consider experimenting with a testosterone-boosting supplement, or find an understanding doctor and consider T replacement, as I explained in the article, The Complete Guide to T Replacement.