As it stands now, sooner or later, your prostate will start to swell up like the dinner rolls momma's baking in the oven. At best, this unwanted hypertrophy will just obstruct urine flow. At worst, it'll develop into cancer.

In North America at least, benign prostatic hypertrophy (BPH) is pretty much inevitable, just like death, taxes, or the birth of some new nauseating boy band. Hell, if a pathologist autopsies just about anybody over the age of 50 – who died of something unrelated to prostate cancer – he'll most likely find BPH or prostate cancer.

Maybe they'll be able to treat yours, and maybe they won't. Either way, the options aren't pretty. Maybe you'll be able to just take drugs that make urination easier. Of course, if there's cancer, you may have surgery and that surgery may leave you impotent. Or, maybe your choice of treatment will just be chemical castration.

Given the prevalence of steroid use and androgen manipulation in general, however, BPH is becoming an issue even with some 25 to 30-year olds.

Their reasoning is that you're better off being a eunuch than a stud who has to get up to pee every half-hour.

First, a Few Words about One of Our Favorite Glands

The prostate is about the size of a chestnut – not all that big for such a potentially troublesome gland. One end is located just below the neck of the bladder and it kind of wraps around the beginning of the urethra (that's why any enlargement impedes urine flow). The other end rests on the rectum, which is why the doctor sticks his finger up your ass during your annual physical.

A healthy prostate has an androgen-sensitive epithelium that wraps around a core of fibrous tissue, or stroma. Sex hormones typically traverse this epithelium and bind to receptor sites. Regulator genes are then activated and transcription factors turn on, causing the formation of new proteins (growth).

However, some of these genes might be proto-oncogenes (genes that code for cancer) and they can be transformed into cancer-initiating oncogenes.

The normal human male usually experiences two distinct peaks of prostate growth. The first occurs at puberty – right around the same time that the Testosterone starts flowing. The second occurs at about the age of 50 when there's an increase in the ratio of estrogen to androgen.

While it's true that Testosterone and DHT definitely play a part in prostate growth, there's more to the picture than meets the eye.

One of the largest studies ever done on men and BPH shows a strong association between BPH and serum estradiol levels.(5) Furthermore, the study reveals that the risk is confined to men who have low levels of Testosterone!

In fact, every study to date is in agreement that the concentration of Testosterone (the precursor of DHT) in the prostate of males suffering from BPH is low or normal.(1,10,11)

And, as shown in a study reported here in Testosterone a few months back, subjecting hypogonadal BPH patients to Testosterone replacement therapy resulted in prostate shrinkage!

Don't get me wrong, estrogen is vital to the male, but once levels skyrocket through over-exposure to the real stuff, or constant exposure to phytoestrogens (plant chemicals that resemble human estrogen) or xenoestrogens (environmental chemicals that resemble estrogen), things go awry. The result can be gynecomastia (excess male breast tissue), additional fat storage, decrease in libido, uncontrollable weeping whenever Beaches is on, or, as this article purports, prostate enlargement. 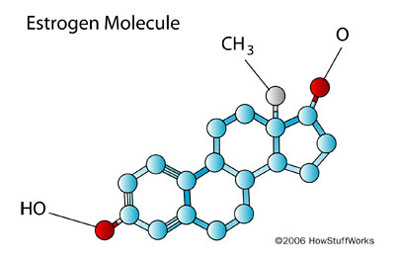 About 75-90% of estrogen in young men occurs in fatty tissue.(4) Testosterone is "aromatized" to estrogen and androstenedione is aromatized to estrone. Only between 10 and 25% is made directly in the testes.

Ah, if only it stayed that way! Trouble is, as we get older, the E/A ratio increases, presumably due to greater estrogen production, unchanged or decreased androgen production, or an increase in the amount of enzyme that changes Testosterone to Estrogen.

This ratio also increases sometimes when we start to manipulate our Testosterone levels, either through T replacement or the use of certain aromatizeable steroids. And, we can't forget the estrogen mimickers in the environment, either.

The prostate itself obtains estrogens, through aromatase activity within its own tissues, and through outside sources. When levels get too high, though, BPH happens. Nodules start to occur in the periurethral transition zone (which signals the onset of BPH), which is the most estrogen-responsive part of the prostate. And, this proliferation of nodules and increased tissue growth is strongly associated with higher plasma estrogen (E2) and higher urinary estrogen secretion, but it's not associated with T levels.(9)

Sex hormone binding globulin is regarded as one of man's big bugaboos.

Here's why: In normal men, only about 2% of our Testosterone is "free," or unbound to carrier proteins. That means that presumably, only 2% is free to be ferried into cells to make muscle grow (among other things). About 54% is bound to albumin and other proteins, and 44% is bound to Sex Hormone Binding Globulin, or SHBG, which is synthesized by the liver.

For years, strength athletes have been trying to figure out how to reduce the amount of SHBG so that more free Testosterone was available for all the good stuff, like muscle growth.

However, as studies that have been largely ignored by the strength community have revealed, it seems that we might all be full of hooey.

For one thing, it now seems that red blood cells function as carriers of sex hormones in the blood stream, and in fact may be responsible for as much as 15% of sex hormone delivery to target tissues.(7) What happens is that dissociation of this protein-bound hormone can occur within a capillary bed, meaning that it's not just the "free stuff" that's working.

That means that these binding proteins in circulation act as kind of a steroid bank. In fact, it's a lot like how hemoglobin regulates the amount of oxygen in each tissue.

(This may be why the free T levels of strength athletes always seem to come up quite low on blood tests. Obviously, they're functioning just fine, but judging by their levels of free T, you'd think they were Girl Scouts.)

How does this tie with estrogen and prostate cancer? I'm glad you asked, Bunky. SHBG synthesis (as well as albumin) is regulated by estrogen/androgen balance, and SHBG has been shown to exist in a number of human tissues, including the testis and epididymis. One of SHBG's traits is that it can increase the ease with which steroids penetrate the cell. It also facilitates steroid binding to the cell. In short, SHBG acts as an additional androgen receptor.(3)

Here's the hypothesis formulated by Wells Farnsworth, one of the world's leading prostate researchers:

"With advancing age, there is a decline in androgen secretion and a rise in circulating estrogen. This results in an increase in SHBG to bind to receptors in the prostatic stroma. Then, steroid (Estrogen, androgen) is bound to the SHBG receptor complex. If the steroid so bound is estradiol or an aromatizable precursor thereof, both stromal proliferation, exhibited as BPH, and the synthesis of IGF-1 will occur.

In sum, it may be that estrogen, mediated by SHBG, sets the pace for prostatic growth and function."

Prolactin is a hormone most commonly associated with the production of mother's milk and possibly breast growth, while its role in males has been considered to be hazy at best. However, recent research reveals that prolactin is a heavy-duty hormone, possibly affecting more physiological processes than all other pituitary hormones combined.(2) And it's now known to be produced at many sites outside the pituitary, including the prostate.

As far as the prostate is concerned, prolactin greatly increases the sensitivity of prostate tissue to androgen. Furthermore, it enhances the permeability of the prostate to Testosterone.

A Few Words about DHT

While DHT is definitely involved in prostate growth, its role may be overstated. A researcher named Krieg found that the DHT level of subjects with normal prostates was much higher in prostatic epithelium than it was in prostatic stroma (the fibrous tissue inside the prostate). In fact, the amount of DHT in the epithelium of these healthy patients was much higher than it was in either the epithelium or stroma of patients between 50 and 95 years of age who suffered from BPH.(8)

In addition, the amount of epithelial DHT in both normal patients and those with BPH decreased significantly with age!

However, estrogen (E1 and E2) levels in both normal and BPH patients went up significantly with age.

What might be happening is that the amount of androgen receptors (DHT or otherwise) in the human prostate is increased by exposure to estrogen and that taking an anti-estrogen might keep the number of receptors in the prostate low, thus preventing androgen binding, transcription, and the resultant growth.

Let's Wrap it Up

This ratio may also change from the use of certain steroids or pro-hormone supplements (thus leading to an increase in estrogen) and exposure to environmental estrogens.

Estrogen itself helps mediate prostate growth, but it's also responsible for increasing levels of prolactin, which allows estrogen to get into the prostate more easily.

Estrogen also helps regulate the production of SHBG and albumin, which acts as carrier proteins for E on its journey to the prostate. Furthermore, these same binding proteins might also serve as additional estrogen receptor sites – or estrogen parking spaces – in the prostate.

Given this evidence, it seems that every living male might at some point wish to plan his prostate-protection strategy. Since I dabble in manipulating my own Testosterone levels, estrogen's effects on the prostate are definitely a concern.

I've been taking 1 mg of the DHT-blocker finasteride every day for the last 7 years, but I might have been better off taking an anti-estrogen, had one been available to me. (Of course, finasteride still seems to be an effective drug in preventing hair loss, and I'll continue to take it for that reason, at least until the new drug, dutasteride, is approved.)

Currently, the drugs of choice for blocking estrogen are probably Arimidex or clomiphene, both prescription drugs, but doctors are wary about prescribing them to otherwise-healthy individuals. As such, I have very high hopes for the new estrogen blocker we're working on and plan on making it part of my daily pro-health cornucopia of pills.

I, for one, am going to take my dinner roll out of the oven before it starts to spill over the pan, if you catch my drift.

What About Saw Palmetto?

For years, most of us in either the life extensionist camp or the physique enhancement camp have touted saw palmetto extract as a weapon against prostate growth. Saw palmetto either blocked DHT from binding to receptor sites, or it somehow limited 5-alpha-reductase (the enzyme responsible for turning T into E) activity.

Trouble is, the largest review of the subject ever undertaken found that neither of the mechanisms "has ever been demonstrated convincingly to be operative in vivo at therapeutic doses."(6)

What they did find, however, was that the substance had some value in treating patients with lower urinary tract symptoms that suggested prostatic obstruction. That means that saw palmetto might just allow men with BPH to pee easier, while not directly affecting the prostate's size in any way.

Even if saw palmetto is, at some point, vindicated, it doesn't address what may turn out to be the true problem – estrogen.

8. Krieg, et al., Effect of aging on the endogenous level of 5-alpha-dihydrotesosterone, Testosterone, estradiol, and estrone in epithelium and stroma of normal and hyperplastic human prostate. J Clin Endocrinol Metab. 77:375-381 (1993). 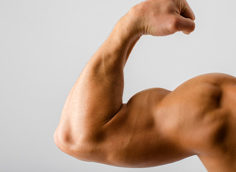