Just eat less and move more, they say. And they’re mostly right, but it’s a little more nuanced than that.

For example, if you eat less and move more as instructed, but you lose a substantial amount of muscle along with the fat – leading to a limp-pecker metabolism and eventually more belly fat – did your diet plan really “work?”

Usually, losing muscle while trying to lean up is caused by dropping your calories way too low, not getting enough protein, and not weight training. You know, The Dummy Diet.

YOU, of course, know better than that. But there’s something else that can mimic those same nasty effects: losing sleep.

Researchers took a group of chubby men and women, put them on the same low-calorie diet, and had them hit the sack in a sleep laboratory for two weeks.

It was pretty intense, and quite boring to read about, so let’s just jump to the results.

Both groups lost about the same amount of total scale weight. And both groups lost some fat and some muscle, probably due the severe diet, which had them consuming almost 700 calories under maintenance per day.

However, the group that slept only 5.5 hours per night…

Meanwhile, the group that slept 8.5 hours per night…

Okay, I made up that last bullet point, but you get the idea.

The researchers concluded that sleep loss can compromise the effects of a reduced-calorie diet. They noted that sleep deprivation itself can have considerable catabolic effects that resemble malnutrition.

The participants in this study would have obviously fared better if they’d been lifting weights and eating enough protein. (Only 18% of their daily calories came from protein.) That’s partly why both groups lost muscle.

Also, 700 calories below maintenance is pretty severe. About 300 calories below would have been wiser, but I suppose the researchers could only keep their subjects in a sleep lab for so long, so they sped up the study with a harsher diet.

Still, the big take-away here is that those getting inadequate sleep lost more muscle and less fat while using the SAME diet as those who got plenty of beauty sleep.

The message? That diet plan you’re using isn’t going to work as well if you’re not sleeping enough.

So How Do I Sleep Better?

If the usual recommendations aren’t working, then think about what’s really keeping you awake and choose a sleep supplement that addresses those issues.

These days, the sleep vampires usually appear in the form of stress and anxiety. Melatonin and even most prescription sleep drugs do very little for those conditions. What you need is a supplement that not only induces sleep, but also helps your mind to chill out. The best supplement for that? Biotest’s Z-12™.

The three components of Z-12™ (PhGABA, 5-HTP, and L-Theanine) work together to help you calm down, relax, get to sleep faster, and sleep more deeply. The only real side effect I’ve noticed is long, vivid, full-plot dreams. These dreams are so interesting they get sequels, prequels, and spin-offs. 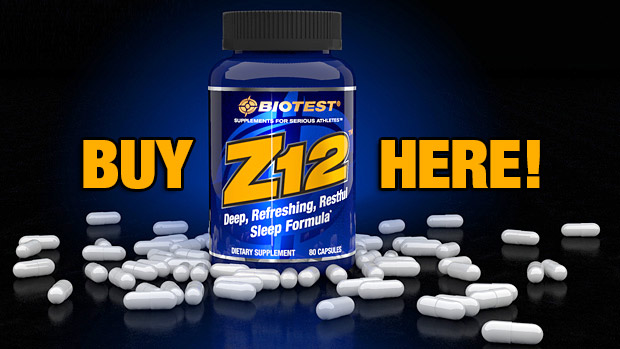 Bonus: Z-12™ is uniquely formulated so that you won’t develop a tolerance for it (that means it works every time just as good as the first time) and you won’t wake up feeling groggy. Just take 2-4 capsules about 30 minutes before you go to bed.

If your main goal is fat loss and you’ve adopted a smart diet plan to achieve it, then you’ll lose more body fat on that diet AND keep your muscle mass intact if you’re sleeping like a log. Make it a priority.