Organic foods sometimes look kind of anemic with bad skin. You just know they sat home alone during vegetable prom night while their artificially big-boobed, big bootied, and blemish-free counterparts were out there provocatively splayed atop someone's salad.

But despite their cosmetic differences and the widespread belief that, paradoxically, the crummy looking organic fruits and vegetables are more nutritive than their non-organic counterparts, they really aren't. (See 5 Trumped Up Claims About Organic Food.)

However, when it comes to being free of pesticides and assorted chemical crap, organic produce is the clear winner. They're routinely "washed" with chlorine bleach after harvest, but non-organic produce is still laden with pesticides that nobody wants their body to soak up. And hand washing with water or even conventional soap doesn't help much at all.

But then there's that affordability thing again. Organic just plain costs more. There does, however, thanks to researchers at the University of Massachusetts, appear to be a way you can make your less expensive, non-organic produce almost as healthy for you as the organic variety. All it involves is a little water, some baking soda, and a few minutes' spare time.

The researchers applied two common pesticides – the insect repellant phosmet and the fungicide thiabendazole – to organic Gala apples. They then washed the apples with three different liquids:

With the Chlorox and baking soda solutions, the treated apples were soaked for 2 or 8 minutes and then gently rinsed with deoionized water for 10 seconds.

With the tap water method, they just rinsed the apples for about 2 minutes.

Pretty much everyone agrees that it's not a good idea to ingest pesticides, fungicides, obesogens or any other chemical contaminants that are found on non-organic fruits and vegetables.

So, you can either buy organic whenever you can, or wash your conventional produce with a baking soda solution. To do this, mix about two tablespoons of baking soda (you can get a 3 pound bag for about 8 bucks) into a gallon of water.

Then soak your fruits or vegetables for 8 to 12 minutes (12 minutes was the most effective duration tested by the scientists) or until your patience runs out. After all, soaking for just a few minutes is better than no soaking, and definitely better than plain old hand washing.

Alternately, you could just peel the skin of any applicable fruits and vegetables, but this of course defeats a lot of the purpose of eating them in the first place because the skin is where most of the healthful polyphenols reside.

It didn't hit me until that first week in the grocery store. There I was with a shopping cart full of eggs, hamburger, sausage, huge blocks of cheese, and an entire cow.
Feeding the Ideal Body, Nutrition & Supplements
Chris Shugart September 24 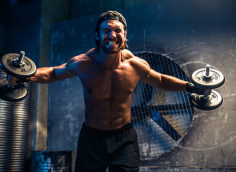