Instead, it's about a type of food cultivation that preserves the soil and hopefully makes for a cleaner environment. If, in doing so, it makes you healthier, great, but it's more about a recycling of resources that protects the environment, enhances soil and water quality, and protects wildlife.

That being said, there are definitely a few health advantages to eating organic, but the correlations between the food and your health aren't as impressive as both science and the lay press have made them out to be.

Here are 5 perceptions about organic foods, followed by the facts:

Sorry to say, but the established nutritional difference between organic and conventional foods is really small, if it exists at all. Meta analyses of organic food studies suggest that they might contain more vitamin C, but for everything else, it's a wash.

It is true, however, that organic foods contain a slightly greater concentration of polyphenolic compounds – plant chemicals that might play a role in preventing certain diseases like cancer and cardiovascular disease.

Organic meat and assorted dairy products (milk, cheese, etc.) have roughly 50% higher omega-3 fatty acids than conventional products. As far as eggs, we might understandably believe they have more omega-3 fatty acids in them, but it's yet to be documented.

However, these products constitute a pretty small proportion of the average diet. In other words, if you're counting on meat or dairy to make up for any deficiencies in omega-3 levels (instead of fish or fish oil supplements), you're likely going to stay deficient.

This is the one category where organic foods are unequivocally better than conventional foods. Of the over 900 pesticides in use worldwide, there are at least 100 of them that can cause adverse neurological effects in adults, and an untold number may plausibly play a role in a variety of cancers. The fewer you ingest, the better.

But it's not true that organic foods are entirely pesticide-free. There are 25 pesticides that have gotten a waiver and are allowed in organic farming.

It'd be nice if that was true, but bacteria like organic food just as well as conventionally grown food. There's also no reason to believe organic foods would contain fewer mycotoxins (toxins from fungi) than conventional food because molds result as a result of post-harvest storage and processing.

There haven't been too many human studies in this area, but the ones that have shown indications that organically grown food may lead to fewer childhood allergies, less adult diabetes and obesity, and fewer cases of non-Hodgkin's lymphoma.

However, there's a "confounding factor" to consider: People who choose to eat organically presumably already lead a healthier lifestyle with a higher consumption of fruits, vegetables, and whole grains. Case in point, it's probably rare to see a heroin addict who insists on organic foods.

It also has to be said that some studies have shown no real difference in the cancer rates between consumers of organic and conventional food (and one study even showed an increase in cancer rates from organic foods), but here we're presented with another confounding factor: Many people, after being diagnosed with cancer, adopt organic food practices and end up checking the cancer box on surveys, which leads to false assumptions.

While the heath differences between organic and conventionally grown food aren't as dramatic as one might hope, you should still buy them and eat them, providing you have enough money to do so. It's marginally better for you, and it's a whole lot better for mama earth.

Conversely, if you can't afford organic foods, there's no need to curse your proletariat status. Just eat conventionally grown produce and meat and once your lotto numbers hit, go for the big O. 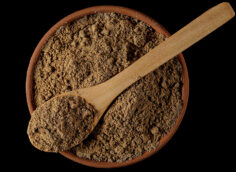 Trying to lose fat? Can't drop calories any lower? Then it's time to reverse diet and keep the fat loss coming. Here's how.
Diet Strategy, Losing Fat, Nutrition & Supplements, Tips
Dave Bonollo February 21
The purpose of this column is tri-fold. Purpose number one is as a "refresher course" for seasoned lifters. Sure, deep down, you may know this stuff, but it's been so long since you first read about it that you've forgotten the rationale behind the subject matter.
Feeding the Ideal Body, Nutrition & Supplements
TC Luoma April 5

Here are some surprising ways drinking can wreck your physique and strength goals, plus how to have the occasional drink or two anyway without doing harm.
Alcohol Effects on Physique and Performance, Feeding the Ideal Body, Nutrition & Supplements
Joe Giandonato March 18