NFL athletes are awesome to work with. They're used to being coached and perform at their best in that environment. They do what you tell them to do, they get results, and they say thank you.

These guys don't want to be inundated with science and complex plans. They want something that works, they don't want it to be a pain in the ass, and they want results.

Come to think of it, that's what most people want.

There's a time and a place for more extreme or complex diet plans, but the majority of lifters can shift their nutrition to focus on building muscle or losing fat without the process taking up half their lives.

Recently, while helping an NFL athlete who needed to lose fat, I realized that most of my advice for him would work for just about everyone. Here's the plan I laid out for him.

These stages can be used by anyone who needs to clean up and re-focus his or her diet:

Actually, maybe you do.

That's because there are a lot of hucksters and spineless pleasers out there telling you that this shit is okay "in moderation."

Every time an overweight person consumes what we'll classify here as "obvious crap" they're either taking a step backward or temporarily halting their progress. And since many of these foods have addictive properties, moderation goes into the trash faster than junk mail.

With the obvious crap removed, it's time to narrow things down. What is "less obvious crap?" These are foods often considered to be healthy that, well, really aren't.

Sometimes these are "better bad" choices: things that are still hampering your progress but not as badly as the obvious-crap foods were before. These are also the types of foods that cause much debate in the field of nutrition.

But low-carb foods can be calorically dense and filled with the worst type of dietary fats, and fat-free foods are often sugar bombs or brimming with processed flour. Sugar is gluten-free. Kid's breakfast cereal is "high fiber." And all of them will still make you fat.

You know this, but often when fat loss is the goal, the IQ drops before the body fat percentage does.

But let's move beyond the not-so-common common sense stuff. Here's what I have my NFL guys drop from their diets that may surprise you:

The wheat issue is controversial, but not to those who just want results and simple rules. So, a simple guideline is to ditch wheat-containing foods or greatly reduce your intake.

The anti-wheat doctors and paleo advocates will bore you to death with studies showing that wheat polypeptides bind to the brain's morphine receptor, the same receptor to which opiate drugs bind, meaning that you get cravings, overeat, and disrupt your natural appetite signaling mechanisms.

They go on to list dozens of other nasty-sounding effects, some of which seem to be spot-on and some of which may be a bit exaggerated.

But this much is true: the health benefits of this particular grain are largely nonexistent, you don't need it, and it's probably doing you more harm than good, for whatever reason.

Maybe it's more related to FODMAPs, or maybe it's just that most wheat-containing foods are also full of the same stuff that can lead to something called toxic hunger. Doesn't matter. The simple rule is the same: Does it contain wheat? Then don't put it in your mouth.

Besides, adopting a gluten-free diet even if you're not a celiac tends to get rid of most of the stuff that made you get chubby in the first place, as long as you don't fall for those pretend-healthy food scams.

If your body fat is stubborn, or you feel out of control around food and you haven't eliminated wheat yet, give it a shot. Same for milk, same for fruit juice.

It can take anywhere from 5 to 28 days to drop the "addiction" to these foods. Food scientists and behavioral psychologists refer to this as the "don't be a pussy" stage and suggest three servings of "suck it up, princess" until bad habits wane and unnatural cravings subside.

Out here in the real world, it works for 90% of people. Let the geeks fling their studies like monkeys fling poo. We'll just focus on simplicity and results.

Replace the pretend health foods with foods you cook yourself. Don't follow a Paleo diet, but eat your meats, veggies, eggs, and coconut oil.

Much like food choices, supplement prescriptions have three phases.

If your supplement choices resemble those of a teenager's after hitting the supplement store at the mall, they probably suck.

If you're spending mainly on things that contain the letters "NO" or your pre-workout is nothing but stimulants that make you feel tingly, you're doing it wrong. If your favorite brand is a multi-level marketing operation, you can't be helped.

Get rid of the things that really don't work or that do very little and focus on the big-bang supplements that every hard lifter benefits from.

The foundation is workout nutrition. To guarantee the greatest gains from training, fuel, protect, and reload muscle immediately prior to, during, and after workouts.

My NFL guys all start with Plazma™ and Mag-10®, adjusted for practices and game day. We do not talk any more about supplementation until this is taken care of. For some of them, this is where we stop because it's all they need. For those on a tighter budget, Surge® Workout Fuel fits the bill.

Perhaps not all that surprising, pro athletes often rely on fast food. My NFL guys replace these convenience meals with Finibars, eaten before and after practice or games.

Many of these athletes suffer from poor sleep, so we get them on ZMA®. I have most of them add 2000-5000 IU of vitamin D to their daily routine, especially my black athletes. Most will also use Elitepro™ Mineral and Flameout®. If they detest fruits and veggies, they get Superfood.

The point here is to fill the nutritional gaps or take care of individual needs. You may only need one or two additional supplements, or none at all.

Here's a simple way to have healthy meals ready to go.

First, go buy a big slow cooker (Crock Pot). Slow cookers come in small, medium, and big-ass. Go for big-ass because you're going to make multiple meals in one pot. You'll want one with a timer so it'll stop cooking when you're away and switch over to the warm setting.

There's no calorie counting or macro micromanaging here. For most hard-training people, there doesn't need to be. Just follow the basic guidelines and you'll figure out how to fine-tune things as you go along.

It works for the best in the NFL and it'll work for you. 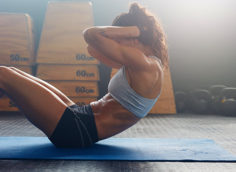 Yes, it can work with the right type of training. The effect is small, but if you're fine-tuning your physique it'll make a noticeable visual difference.
Belly Fat, Fat Loss Training, Losing Fat, Nutrition & Supplements, Tips
Eric Bach August 7
This article is perhaps more complicated than some that might appear in Testosterone. Hey, no one ever said this stuff was easy; if it was, everybody would do it!
Losing Fat, Nutrition & Supplements
Eric Noreen August 10
It's high time we cleared the air regarding inflammation and all of the nasty consequences thereof. I've been preaching this stuff as an underlying theme throughout much of my writing, since first coming to T-mag (now T-Nation) a few years ago.
Feeding the Ideal Body, Nutrition & Supplements
Lonnie Lowery, PhD May 4