Back in 1999, I got an email from someone who said he was a scientist that worked for Archer Daniels Midland, the giant global food-processing corporation whose mission it is to sprinkle the world knee deep in soybeans.

He wrote to tell me about how some of his research had shown that soy contained chemicals that acted like estrogen and could affect the reproductive systems of human males, thereby reducing sperm counts and reducing testosterone levels. As is commonly done by evil corporations everywhere, Archer Daniels Midland squelched the research.

Whether he really worked at the conglomerate and whether ADM really did suppress his research, I don't know, but regardless, he wasn't the first scientist to report that soy had negative effects on mammalian reproductive systems.

Prompted by his email, I wrote Bad Protein, probably one of the first mass market articles to talk about any possible adverse effects to men from eating soy. Since then, as you'd expect, the bodybuilding subculture, along with bio-hackers, nutritional chemists, and enlightened nutritionists, have long debated the health effects of soy, especially soy protein.

Most of the former are at least suspicious, if not downright terrified, of soy, while most of the lay public, thanks in large part to the marketing strength of ADM and other companies in the soybean business, continues to regard all-things-soy as synonymous with health.

But it's been almost 20 years since I wrote that groundbreaking article and a lot of the people who used to condemn soy have forgotten what it was about the grain that got everyone so lathered up in the first place. In fact, most modern-day articles don't even mention the possibility of an association between soy and male reproductive health.

So is soy still "bad protein"? It's time to take another look at it and see if it deserves a second chance.

The concern with soy is that it contains plant chemicals known as isoflavones that function as endocrine disrupters. These isoflavones are genistein, daidzein, and glycetein. There's also a fourth – equol – but it doesn't occur naturally in soy; instead, it's a particularly potent metabolite of daidzein that only shows up in 33 to 50% of humans who possess the particular bacterial strain necessary for its conversion (1).

These isoflavones can affect mammalian cells in two ways. They can either bind to high-affinity, highly specific cell receptors in the cell nucleus, which in turn attach to DNA that leads to protein transcription. In effect, they act just like estrogen, albeit a weaker version.

Alternately, they can simply bind to these receptor sites and sit there, preventing real estrogen from getting its normal "parking spot," thereby preventing it from initiating protein transcription.

You don't want the first scenario to happen, particularly if you're a male. At least that's the theory. The thinking is that estrogen, or something that acts just like a weaker version, can be responsible for a host of "feminizing" effects. It can also make it harder to put on muscle.

Of course, if you're a male who has high levels of estrogen in the first place, you wouldn't mind if any of these isoflavones stole estrogen's parking spot because they're weaker than real estrogen.

The isoflavone would prevent the real, stronger, estrogen from binding and initiating protein transcription and you'd miss out on possible side effects like additional body fat, gynecomastia, possible BPH, and reduced sperm counts and testosterone levels.

If, however, you have a low level of estrogen in the first place, the comparatively anemic activity of the weak estrogen could nevertheless lead to some of this undesirable estrogenic activity.

We've known that isoflavones can cause reproductive disturbances in mammals since 1946 when it was discovered that sheep that grazed on red clover (which is high in phyto, or plant, estrogens) were infertile. Scientists made a similar observation about 20 years later when cows that were stall-fed red clover were also found to be infertile. Soon after, captive cheetahs on a soy-based diet turned out to have the same problem.

Fertility was restored in all three cases when the isoflavone intake was reduced.

There have also been innumerable experiments on mice and rats, most if not all showing that dietary isoflavones led to reduced fertility, reduced sperm counts, and reduced testosterone levels.

Granted, most of these studies involved amounts of genistein that were probably five times more than a human would get through food, but they need to be taken seriously because, as Heather Patisaul, a soy researcher at North Carolina State University, explains, "Our reproductive system and the rat reproductive system aren't that different. The same hormones are involved."

Some of the human studies showed similar problems. In one study of 99 men, the men who'd eaten the most soy in the previous three months had the lowest sperm counts (2). In another study, total and free testosterone concentrations were inversely related to soy protein intake.

Another study presented at the 2007 conference of the American Society of Reproductive Medicine reported that an analysis of subfertile men found that those who ate the most soy had 41 million fewer sperm per milliliter than those who consumed none (3). Alarmingly, the average amount of soy consumed was equal to that found in half a tofu patty.

But, truth be told, human studies about the alleged testosterone-reducing effects of soy have been largely inconclusive, some showing a positive association and some showing no association. But then came a big paper in 2009 that reported the cumulative findings of 32 separate studies on soy intake and testosterone in humans (4):

"No significant effects of soy protein or isoflavone intake on T (testosterone), SHBG (steroid hormone binding globulin), free T, or FAI (free androgen index) were detected regardless of statistical mode. The results of this meta-study analysis suggest that neither soy foods or isoflavone supplements alter measure of bioavailable T concentrations in men."

So does that take soy off the hook for men? Maybe. Maybe not.

Soy protein and soy isoflavone clearly affect the fertility of other, non-human mammals. There's no disputing that, but why not humans, as the meta-study purports? It could be one of several reasons.

The dosages used in human studies are likely wildly inconsistent. Isoflavone content depends on the type of soybean used and the conditions that the beans were grown in, like soil type, rainfall, irrigation, and amount of sunlight. Some studies probably used potent soybeans, some weak, and some probably used purified isoflavone extracts, leading to wildly divergent results.

Another potential problem concerns equol, the most powerful soy isoflavone. As mentioned earlier, equol is a metabolite of the soy isoflavone daidzein, and it doesn't occur in everyone – only those that contain a specific bacterial strain necessary for the conversion to occur. Those who have the right bacteria to metabolize daidzein to equol are called "Equol Producers" and have been shown to be more likely to exhibit estrogenic effects from soy.

It's easy to imagine that a sizeable number of the test populations analyzed in the meta analysis were lacking this particular bacterial strain, thereby making a good number of participants "immune," or partially immune, to soy protein.

The number of equol producers might have been just low enough to prevent the results from approaching "statistical significance," thereby throwing the entire study into question. Or maybe not. As is often the case, we need further studies.

Of course, there are plenty of other PROVEN things about soy and/or soy protein that might make you want to avoid it.

Avoiding all soy products because of real problems and suspected problems isn't realistic, as soy protein isolate, soybean oil, textured vegetable protein, and various other products – not to mention the soy foods and drinks that people use as a replacement for soy – account for approximately one fifth of the calories eaten by Americans. About a quarter of infant formula is made with it, and school lunch programs across the country routinely add soy to hamburger patties.

Then there's a formidable, pro-soy food establishment you have to contend with. Even the Food and Drug Administration is on board as they cling to evidence that it may reduce the risk of heart disease.

Still, anyone, with a little effort, can reduce his or her consumption of this questionable grain. Here are my recommendations:

I'll give the final word to soy researcher Heather Patisaul, who compares the effects of soy isoflavone genistein to Bisphenol A, or BPA, the estrogenic compound found in plastic bottles and the lining of canned foods that scientists suspect can negatively affect brain and reproductive development:

"Genistein does the same thing and yet we are supposed to be eating tons of it because it's supposedly healthy – it just doesn't make any sense." 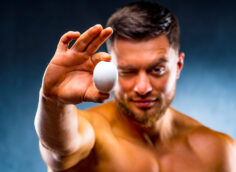 Few foods have been as scrutinized by science as eggs. Read this list of eclectic egg facts and you'll never look at one the same way again.
Feeding the Ideal Body, Nutrition & Supplements, Protein
TC Luoma March 9

If your main goal is fat loss, then you need to know which camp you fall into. BOTH are mistakes. Check it out.
Losing Fat, Nutrition & Supplements, Tips
Paul Carter August 14