If you find yourself sitting in an emergency room this weekend, take a look around. What do you see? Well, besides drunk people who've made some very bad choices, you'll see some folks getting immediate attention while others wait for hours. It doesn't matter who got there first.

The good news is, if it's YOU who's sitting there waiting for hours then it means you're not that hurt. Your broken finger, twisted ankle, or improperly inserted marital aid can wait.

See, emergency rooms use the triage method. "Triage" is the assignment of degrees of urgency to wounds. Whoever is hurt the most goes first. Some even have a chart they go by:

You should approach your fat loss efforts the same way.

When you decide it's time to not be chubby anymore, or you'd like to finally turn that blurry 4-pack into a sharper 6-pack, you have a lot of choices to make, most of them involving nutrition.

Your first impulse might be to find a "diet" – some strict, pre-written plan with a lot of rules. But chances are, you have a few obvious issues that could be taken care of first.

Here's a real-life example. Diane told me she wanted to try a keto diet. She asked me what I thought about that. Instead of telling her, I asked a few questions:

Diane didn't know it, but I was putting her through triage. I was trying to find out how badly she was "bleeding." Turns out, Diane drank sodas, ate fast food once per day, and only went to the gym to walk on the treadmill.

In short, keto could wait. In fact, it probably wouldn't ever be necessary for her goals. Her chances of being successful on such a restrictive, life-altering plan like keto were slim to none anyway.

Using the triage method, we identified her "emergency" problems, and all of them could be fixed with simple changes.

Not Shiny, Not Trendy, But Effective

People are drawn to the "new" and shiny. They're drawn to the extremes. They want to run a marathon when they haven't tried jogging a mile first. They think they can never eat a carb again when currently they can't even go three hours without a liquid sugar injection.

With the triage method, you identify your biggest problem, that thing that's holding you back, and take care of it first. Then you move to the second-biggest problem, just like an emergency room doctor choosing which patients need help first.

I advised Diane to drop the sodas. If she can do that, then she'll drop several pounds of fat and keep it off. Then we'd talk about the next step – which won't be keto. That step will probably be weaning her off the drive-through food and teaching her about Sunday meal prep. Then we'll talk about weight training. And so on.

Where Are You Bleeding?

You're probably not like Diane, but if you have some fat to lose then you're clearly bleeding from somewhere. But where? Think about it. Don't jump to an extreme plan just yet. Triage yourself. Some ideas:

Pretend that all your dietary habits, workout choices, meals, and daily activities are people, and all of them are sitting in the emergency room.

Now, who needs to be rushed back to the see the doctor STAT? Be honest. List everything out, from needs-fixed-fast to not-perfect-but-not-a-big-deal.

First, take care of the "person" at the top of the list. (For Diane, that was her soda habit. BIG problem, needs attention fast.) Spend a week or two there. When that's taken care of, triage your way on down the list.

Chances are, the fat will begin to drop off and you'll never have to go crazy on a strict diet or twice-a-day training plan. And these changes will be sustainable – healed forever. 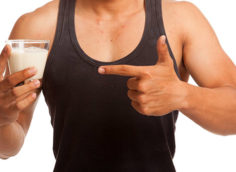 Soy was once thought to shrink your balls and make it harder for you to put on muscle. Does current research back up those fears?
Diet Strategy, Dietary Myth Busting, Feeding the Ideal Body, Nutrition & Supplements
TC Luoma September 11

We know now that coffee can be a health food. But what kind of coffee? Here's the science.
Diet Strategy, Feeding the Ideal Body, Nutrition & Supplements, Tips
Chris Shugart July 22