Proponents of coconut oil always point to the Polynesians as Exhibit A in their defense of the oil's benefits. They tell you that Polynesians have low levels of heart disease and it's because of all the coconut oil they ingest.

Nice theory, but it doesn't wash. I've spent a lot of time loinclothing through French Polynesia and it's true that coconuts abound. You can't walk more than five minutes without hearing that characteristic PLOMP noise a coconut makes as it falls off the tree and hits the ground... or the top of some unlucky tourist's head.

And sure, the Polynesians eat a lot of them, as in whole coconuts – the meat, the fiber, the "milk" inside, and yes, the oil that's contained in the meat, but therein lies my point.

They're eating most of the coconut and thus getting all its polyphenols and nutrients instead of just swilling the relatively nutrient-sparse oil. If they use the oil at all, they apply it to their hair and skin so that ocean water beads up on them like they were shiny new cars.

So if their collective heart health can really be attributed to coconuts, instead of the more likely reason that they live in a virtually stress-free freaking paradise where fruit and fish abound, it's likely because of the whole coconut and not heavily refined oil.

Marketers of coconut oil haven't let the facts get in their way, though. According to one survey, they've somehow convinced 72% of Americans that coconut oil is healthy, whereas only 37% of nutritionists think so. These marketers have told people the oil will help them lose weight, put on muscle, and build up immunity.

It's also likely that its approval rating is much higher among lifters and athletes in general because, like young children, they still want to believe in fairy tales. Well, coconut oil is one fairy that deserves to have its wings torn off.

Coconut Oil and Heart Health: A Wash at Best

Granted, you can find a substantial number of studies that suggest coconut oil will do all those wonderful things it's purported to do. But you can also find plenty of studies that say it does zilch.

Worse, the American Heart Association (AHA) says that you should avoid coconut oil because it's a saturated fat, which they correlate with heart disease. However, other studies suggest that the oil improves heart health.

The truth is a bit more complicated. Yes, coconut oil raises bad cholesterol levels (that's what saturated fat does), but it also seems to raise good cholesterol levels, suggesting a wash between good effects and bad. Of course, there's more and more evidence to suggest that the whole cholesterol issue is bogus anyhow; that the true cause of heart disease is inflammation.

Still, if you're truly interested in heart health, a "wash" isn't good enough and you're not content to wait around until the winner of the cholesterol war is declared. Instead, you'd likely choose to use unsaturated fats like olive oil, which unlike coconut oil, have demonstrated irrefutably positive effects on heart health.

MCTs? Yeah, Not so Much

Most of the lose-weight, grow-muscle claims about coconut oil come from the belief that it contains a lot of medium chain triglycerides (MCTs), which are processed differently and faster by the body so they're less likely to be deposited as fat.

And, truth be told, some studies seem to have confirmed this, but those studies often used purified oil that was 100 percent MCTs. By most accounts, only 13 to 15% of regular, off-the-shelf coconut oil are MCTs, but even that might not mean a lot.

This alleged MCT comes mostly in the form of lauric acid, and while it's true that it's often classified as an MCT oil, the body metabolizes it more like a long-chain fatty acid, thus throwing the MCT magic of coconut oil into question.

And even if the MCT levels in coconut oil were higher, the benefits of true, pure MCT oils have by no means been answered or even particularly clarified through research.

So, Yea or Nay on Coconut Oil?

Given the research on coconut oil, or lack of research, coconut oil should be used to add flavor to foods, or to act as an emulsifier in your coffee. You can also add a little bit to the water you use to prepare white rice to reduce its calories, but you should probably forget the notion that it has any special muscle building or fat-burning qualities.

Of course there is some evidence that coconut oil might actually lead to increased testosterone production, but olive oil does the same thing.

In general, though, like any saturated fat, you should probably limit the use of coconut oil to less than 10% of your total caloric intake. 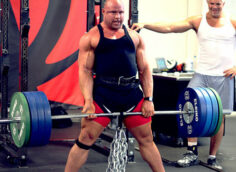 Excuse me, but would ya' mind kickin' my ass?
Feeding the Ideal Body, Nutrition & Supplements
Chris Shugart September 10