I used to love low-carb dieting for fat loss. It worked for me and many clients. The first time I got shredded I followed a low-carb approach. This created an emotional attachment with the nutritional strategy. In my mind, if you did anything else you were a fool.

Fast forward a few years and I rarely have my carbs lower than 300 grams per day and I'm as lean, if not leaner, than I ever was with the low-carb approach. The same goes for many of my clients.

The simple reason why I thought low-carb eating was valid is that it worked. For that same reason, I still think it has validity, but it's not optimal, especially if you're a guy who carries a lot of muscle mass or aspires to build even more muscle.

Going low carb allowed me to create and maintain a calorie deficit. This is the single most important element to a successful fat loss phase. Back then I thought there was something magical going on with insulin. This was when paleo was in its heyday. But nope. Nothing was magical. I was just eating less than I burned.

Once I took a more logical approach to fat loss and applied a hierarchy of needs, everything got easier. I was in a position where I could eat a greater variety of foods and still get shredded. That made the whole process more sustainable. A plan is only as good as your ability to adhere to it!

So what are the hierarchy of needs when it comes to nutrition? I call it "The Three T's":

Then to get shredded and maintain muscle I began asking myself the following questions: What's the best style of training during a cut? And what nutrition best supports this training?

Why Are Carbs So Important?

Carbs are the preferred energy source of high intensity activity (lifting weights). They're the most anabolic macro, as long as your basic protein and fat needs are met. So, carbs have an important role to play in preserving muscle while dieting. They fuel hard training and help you recover from hard training. Better training with better recovery makes for better progress and bigger muscles. For that reason, I now emphasize their importance when helping anyone looking to get lean and keep muscle.

This isn't to say low-carb dieting doesn't have a place. It's just that you need to pick the right tool for the right job. To be the leanest, most muscular version of yourself, very little of your time should be spent going low carb.

About halfway through the night your body runs out of muscle-building fuel and leaves you in a catabolic state. Here’s what you can do about it.
Nutrition & Supplements, Performance Proteins, Protein
John Berardi, PhD March 1 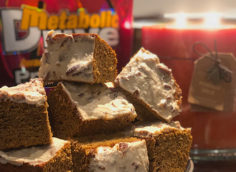