I know people who are so afraid that fructose will ruin their physique that they won't even eat apples.

Did you hear me? They won't even eat apples!

They believe that fructose is preferentially deposited around their midsection and they're absolutely certain that ingesting it, or, gasp, High Fructose Corn Syrup (HFCS), will quickly encase their liver in fat so that it looks like Hans Solo trapped in a block of Carbonite.

Add to that the "lesser" fear that it might cause high blood pressure and kidney disease and you've got one allegedly fearsome form of sugar.

There's only one fruit fly in the ointment, and it's that these people are suffering from what I call Fructose Derangement Syndrome, or FDS.

FDS is characterized by an unfounded hysteria over what is in concept and actuality just another type of sugar, probably no better or no worse that its sweet lollipop-lickin' cousins.

But you'd never know that from all the boogieman-ification that's been going on for the least 9 years.

FDS has actually made me feel bad for the high fructose corn manufacturers. They're desperately trying to prove they're innocent of creating a nation of tubbies.

Let's look at the evidence and see if we can prove that HFCS has been framed by a misreading of the facts and a whole lot of slandering by nutrition bloggers.

To see how FDS even became possible, we need to sift through a little history and look at a few scientific milestones and even a couple of economic milestones.

In 1957 a couple of scientists named Richard Marshall and Earl Kooi figured out how to use a bacterium, Aeromonas hydrophilia, to turn the powder inside corn kernels into fructose.

They figured it would save food manufacturers from having to cater to fluctuations in the cane sugar market caused by bad weather, crop spoilage in general, worker strikes, whatever.

But nobody cared. Manufacturers continued to use cane sugar to sweeten soda pops and breakfast cereals and practically anything else that needed sweetening.

Years later, fate and President Richard Nixon changed history. Nixon had just signed a grain deal with the Soviet Union. That act, plus a streak of bad weather in the Midwest, caused a grain shortage that caused commodity prices to go through the grain silo roof.

As such, food prices escalated. Consumers even initiated a nationwide meat boycott to protest the high price of hamburger.

Nixon reacted by telling his Secretary of Agriculture, Earl Butz, to fix the problem, and Butz's solution was farm subsidies. Farmers began to get paid by the government to produce as much grain – mostly corn – as possible and dump in on the market regardless of fluctuations in supply and price.

Within a short time, farmers in the 1970's were growing an additional 500 calories per American per day, approximately 200 of which were ingested by the soon-to-be fatter residents of the U.S. (The remaining 300 calories were dumped into overseas markets or turned into ethanol.)

But at the end of the 70's, just about the time corn prices were dirt cheap, prices in cane sugar spiked. Manufacturers had had enough. They were tired of cane sugar's price fluctuations and the uneven supply so they switched practically en mass to corn, or more specifically, fructose manufactured by the process developed by Marshall and Kooi in 1957.

With all that cheap fructose being converted into corn syrup, or the more economically sensible high fructose corn syrup, manufacturers started to invent all kinds of different foods that used the sweet product. (If you need a visible representation of this wealth of new crap sugary food inventions, glance down the breakfast cereal aisle of any supermarket.) 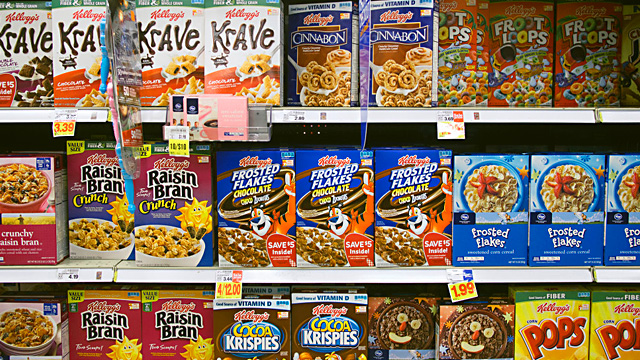 Everyone was fat and happy, literally, until 2004, when a couple of nutrition scientists named Barry Popkin and George Bray published a paper in the American Journal of Clinical Nutrition that tied the country's rise in obesity specifically with the concurrent rise in production of High Fructose Corn Syrup.

Any fair reading of their paper would reveal only the weakest evidence that HFCS – and not just a surplus of calories in general – was responsible for the fatty zombie epidemic. Popkin himself said, "The original article actually was a scientific speculation saying we needed research."

But then bloggers and self-proclaimed, autodidactical nutritionists got whiff of the paper, or more likely, a whiff of someone who knew someone who once might have met somebody who read the original paper.

Thus was a boogieman born. Thus did manufacturers start dumping HFCS in favor of other sugars, which are touted as "natural" on product labels.

Looking for the Grains of Truth

It's true that there's some evidence that fructose can cause a fatty liver.

When ingested, an enzyme named phosphofructokinase determines whether or not the liver needs fuel and unless you're really energy depleted, that's where the fructose is shuttled to – the liver.

Once there, it's directed to liver mitochondria, which either package the fructose as glycogen for short-term use or store it as fat, which, while reversible, is not a good thing for liver health/function if it continues for any length of time.

An endocrinologist at UC San Francisco has even called fructose "alcohol without the buzz," because of the damage it might do to the liver.

Likewise, there's also some evidence that suggests that fructose might cause other problems like high blood pressure, elevated triglyceride levels, or even kidney disease.

And in what seems initially, at least, as an argument to support the apple haters I alluded to earlier, a 2009 article in the Journal of Clinical Investigation reported that among volunteers who drank either a glucose beverage or a fructose beverage, the latter stored more belly fat. (However, somewhat paradoxically, the same study showed the glucose drove up triglyceride levels more than fructose.)

Another study, this one conducted at the University of Colorado in 2012, explained that uric acid can accelerate the metabolism of fructose to fat, but uric acid output varies from person to person. That might explain why some people are supposedly more sensitive to fructose than others.

And it's true that fructose has also been found to affect the regions of the brain that control appetite. In some studies, appetite decreased in subjects after glucose consumption but not so much after drinking fructose.

All that stuff sounds pretty bad, but you have to consider a few things:

A worst-case soda pop scenario would have you drinking a HFCS product that was 55% fructose, so if you ingested 100 grams of the product, you'd be ingesting a paltry 5 extra grams of fructose than you would if you drank the cane sugar (sucrose) version.

Thanks to the demonization of fructose, cane sugar manufacturers are again sitting pretty, but as the main sugar in cane is sucrose, which, as stated, is a 50-50 blend of fructose and glucose, the place they're sitting is a rickety chair that's afflicted with termites and wood rot.

It's of course true that the majority of sugar in most fruits is fructose, hence the name (fruit sugar). The most fructose-dense fruit is the fig, as it has about 23 grams of fructose per 100 grams of fruit.

Way down the line, in second place, is the apple, which has close to 7 grams of fructose (when you combine the 5.9 grams of pure fructose with approximately 1 gram of fructose that's bound up with sucrose) per 100 grams of fruit.

But let's say the worst is true, that fructose really does make your belly shake when you laugh like a bowlful of jelly, screws up your liver, and fails to curb appetite.

You need nutrient-rich foods to function properly, to fight off disease, and to grow, repair, fornicate, and all the rest of the stuff we lump under normal human processes or activities.

Hell, you know all that.

Avoiding specific fruits or, infinitely worse, all fruits because of the alleged impact they might have on your physique (or health) is shortsighted and just plain wrong because fructose, at leased based on the preponderance of evidence gathered from human studies, is no better or worse than other types of sugar.

(However, having said that, I would urge caution in drinking juices ad libitum. When you drink these highly concentrated, pulverized concoctions, your body doesn't have to do much to assimilate them. The blender has already done the bulk of "digestion" and thus the sugars in the juices are absorbed very, very quickly, resulting in very high blood sugar levels with a concomitant rise in insulin. That's bad news for body comp in the long run.)

Likewise, drinking a soda or eating some nutritionally perverse breakfast cereal that's made with HFCS isn't going to make your liver to congeal into a hockey puck.

But maybe Fructose Derangement Syndrome isn't really an issue for you. Maybe you avoid simple sugars in general and eat your fruit like a good little boy because the benefits far outweigh any possible disadvantages.

However, if you're like me, nothing makes you froth at the mouth more than another myth or half-truth being disseminated and then picked up by tens of thousands of self-anointed health experts.

Having a nice supply of logic and facts at hand to blast their FDS beliefs and assumptions apart like so many watermelons being blown apart by a sharpshooter's rifle.

Hope you didn't go food shopping yet, because you're about to make big-time changes to your grocery list.
Diet Strategy, Feeding the Ideal Body, Nutrition & Supplements
Chris Shugart January 28