Dave Tate is no stranger to injuries.

Think that qualifies for, "Biggest understatement 2011"?

Fact is, Dave has suffered enough injuries for ten lifters. With so many parts that have been sewn back together or reinforced with steel rods, how this Frankenstein of the iron world can still find it in him to train with weights – much less bust his ass under a bending bar – is nothing short of amazing.

Unfortunately, unless something is done, that day may come sooner than later.

High cholesterol, chronically elevated blood pressure, and high triglycerides are his new foes, and while not as cool or macho as tearing a pec or blowing a disc, they're just as serious, if not more. After all, a soft tissue injury can reduce the quality of your life, but usually it won't shorten it. The same can't be said for conditions like hypertension and diabetes.

I can see you young bucks out there yawning into your computer screens. Don't think any of this old man health stuff matters? Here's an experiment. Go to your local powerlifting dungeon and ask the most hardcore over-40 lifter what's more important to them, hitting a new PR or seeing their son or daughter graduate college? That should set you straight.

Anyway, Dave asked me to look at his blood work to see if I could help correct some of his health issues. This wasn't a "get ripped abz thing" – Dave's done that many times before, and if you've seen his pictures you can see he has no problem getting lean or following a diet. (Having guys like Shelby Starnes dial you in certainly helps!)

Vitamin D. With summer approaching, I'm sure we can get this up to snuff just through sunlight exposure (a very good thing, despite all the irrational fear of melanoma).

Most doctors experienced in this area will tell you that much of the melanoma they see is on spots that don't even receive regular sun exposure, like on the front of the hands, for instance. For now, I'm instructing Dave to take 10,000 IU's of Vitamin D a day for one week only, followed by 10,000 IU's once a week.

Vitamin D is a fat-soluble vitamin, so it won't clear as rapidly as Vitamin C, for example, hence the once a week dosing. I can't emphasize enough the importance of keeping Vitamin D levels in good shape.

Triglycerides. His triglyceride levels are creeping into the outer range/limit. I've worked with many people with high triglycerides, and the culprit is usually eating too much refined sugar. My hope is we can lower this by adopting a "Pop Tart free" type of diet. Granted, this is also heavily influenced by genetics, but we'll fight it as best we can.

Cholesterol. Dave's total cholesterol is 241 – which doesn't mean a hill of beans to me. The HDL level is really good, which I was pleased to see, but I'd prefer to see that number get even higher.

The LDL is worrisome, but first you have to know if the LDL particles are fluffy/large or not. The bigger the particle, the more meaningless this number becomes. There's also speculation that real problems only arise when the LDL oxidizes in the body.

I do have a secret weapon against that – it's called organic red palm oil and it'll be included in his diet.

Previously, I'd asked Dave to do a few things.

I'd give him an 8 out of 10 on following through. After talking, I'd say that he does a great job delegating things to his staff, and he doesn't have all the symptoms of someone with adrenal fatigue. He's also really good at avoiding life suckers and drinks a decent amount of water, too.

We called his only muff the "Attack of the Cadbury Eggs." He killed a full bag in one week. Fortunately for Dave, it's only Easter once a year.

After following these recommendations, for two weeks, Dave's blood pressure dropped from 153/102 to 143/78 and he lost six pounds. This was great progress, so we added a few new rules to the list.

I also had Dave get his bodyfat tested, and the readings were as follows.

The percentage doesn't really interest me (it rounds up to 10.00% if using the Parillo calculation, 14% by way of Jackson/Pollock) as we're focusing more on his health, but it will be interesting to see how these numbers shake out.

Dave and I can talk training for hours, and sharing a workout with him is one of the most inspiring – and exhausting – things a lifter can do. But as they say, only a fool takes his health for granted, and Dave Tate might be kinda crazy, but he ain't no dummy.

Dave's got his work cut out for him, but he's armed with a plan and plenty of determination. None of us can trade in our family history, just as Dave can't trade his beat up and broken down body for a newer model – but we all can take a proactive approach to our health and face the challenges head on.

Dave has to play with the cards he's been dealt, but that doesn't mean he's just going to fold. Neither should you.

Congratulations. You've succeeded where most people have failed. You've bucked the obesity trend and have lost a small mountain of fat. You feel better, you look better, and your health has greatly improved. Good for you.
Feeding the Ideal Body, Nutrition & Supplements
Chris Shugart July 21 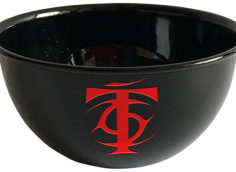