It's that time of year again; the time where "expert" holiday eating tips from trainers, nutritionists, athletes, and even celebrities flow like rum-spiked eggnog. Some of the gems include "drink more water" or "carry a bag of celery sticks around with you."

As a T-Man, you know this pabulum is mostly intended to entertain rather than educate, to make people "feel" like they're doing something good for themselves instead of actually producing results. So you curse this fluff to the Underworld and proclaim the only value to the magazine it appeared in would be as emergency toilet paper during the upcoming zombie apocalypse.

Despite people's best intentions going in, including hardcore athletes, almost everyone strays from the path and gains an extra layer of non-functional flab coming out of the season's eatings.

How are you not going to pack on some fat with your mama's glorious home cooking in amounts that could feed a small army? (Actually, my mom would rather booze it up and chain smoke than cook, but just roll with me on this one for the article's sake.)

What are an athlete's options?

Use cheerleader-like, self-help pep talks to try to stay on track, suffer through weeks of psychological torture, and fight daily battles because your baseline nutrition plan isn't that practical to begin with?

Go with the "eat everything in sight for 6 weeks because it's a bulking phase and you have to get fat to get huge" approach. Of course, most informed coaches have already told you that's not the best thing to do metabolically, hormonally, physique-wise, or for your overall health. But whatever.

Flash forward my friends. Think about what you really want to be doing when January 1 rolls around, assuming the Mayan predictions were incorrect.

When 2013 hits, athletically, wouldn't you rather be focused on improving your sports' skills rather than losing fat?

Physique-wise, wouldn't you want to focus on making improvements rather than just trying to scratch and crawl back to a reasonable body fat percentage?

It's clear most of us could use some better Holiday eating strategies. We just need some of the non-bullsh*t variety.

Embrace Your Need to Feast

Here's the unfortunate truth – almost all the holiday "diet" advice you get from a variety of mainstream sources goes against our natural human instincts, which is to feast like a beast once a day.

It also goes against our evolutionary history and social patterns, which is to eat animals, and party like animals, at night.

That's why those mainstream fitness tidbits rarely work. It sounds good on paper, but doesn't work in real life situations when the animal inside takes over. Yet, we keep coming back to this fluff because we know we need some kind of help.

So what, you're supposed to be cool with nibbling on a disturbingly unsatisfying 200-calorie, low-carb snack while everyone else is chowing down on a wicked dinner spread, hitting the open bar, and fooling around under the mistletoe?

That's like saying you can look all you want, but you can't have sex over the holiday season – unnecessary, unfathomable, impossible. And it doesn't have to be that way.

Everyone today is focused on Intermittent Fasting, which I think is a viable play call in a fat-slashing playbook.

But I tend to focus on the infinitely more fun part, The Intermittent Feast. Cut calories and carbs at night? Ha! Maybe if you want to hate your life.

One of the core principles is an eating structure that mimics our evolutionary past, the hunt and feast structure – eat lighter while active during the day, eat the majority of your calories and carbohydrates at night while relaxing or socializing.

If not, good luck with your snack packs. If yes, lets dive into some feasting details.

Here's what you're supposed to do:

Eat 5 equal calorie meals throughout the day and finish with a low calorie, low carb snack. Misery loves company I guess, and trust me; there are some miserable and grumpy fitness people out there.

The day starts off good, but then you end up at a Holiday "Rage," and there's a ton of free, 5-star food around you.

What do you do? You binge and eat a huge feast anyways, because instinctually that's what we're meant to do. And with that last large meal you completely overshot your calorie and macronutrient totals for the day.

Listen man, eating big at night doesn't make you fat. Eating too much/too many calories for the entire day makes you fat.

If you've eaten large and/or frequent meals throughout the day, and then eat another large dinner on top of that, chances are you'll overshoot your daily calorie needs and gain fat. It's the total food intake, not the distribution that's the problem.

So yes, if you're eating big during the day, you have to taper down and starve yourself at night.

But if you eat lighter during the day and train, chances are you enter dinner in a relatively large calorie deficit with depleted energy reserves, and even a large meal with a significant amount of carbohydrates will be used to restore energy reserves first before spilling over into fat stores.

Does the evolutionary hunt and feast structure sound like theoretical or fad diet hogwash? Well, there's actually some science to it.

In non-geek-speak, keep your damn hand out of the office candy bowl. Don't eat those sugar and refined carbohydrate snacks, or starch-loaded lunches during the day.

Instead, eat a lighter, lower carb, protein-based lunch. This will lead to better cognitive function, energy, and body fat slashing for a good portion of the day.

Most people find it relatively easy to cut calories and make better food choices during the day as long as they know they can eat a larger meal at night and get to end the day satiated and satisfied.

I focus on The Feast, which is the key to this plan. The rest of the day is more flexible.

For simplicity's sake, I really only eat two meals a day (Serge Nubret-style) with some peri-workout modifications on training days.

Find whatever pattern during the day works best for you and your goals, which I know is blasphemy in this era of universal systems.

I use a variety of strategies with the people I work with, but the overall theme is eating relatively lighter and lower carb during the day.

Eat a complete, satiating meal, with protein, veggies, and the majority of your starchy carbohydrates at night.

If you're eating a big, real, whole foods dinner, chances are you'll be stuffed, and you won't have much "room" leftover to binge on holiday foods like pie (except maybe for the non-pastry variety of pie – in which case you should treat yourself to a slice or two, once a day, always guilt-free).

Many people who've adopted this nutritional approach complain of having to eat too much at night. Pour souls. Doesn't that sound a lot better than starving at night and going to bed with visions of candy canes dancing in your head – not Candy Cane the stripper – literally, candy?

4 Don't Fall Off The Infomercial Edge

This is where some will proclaim that this magical structure of eating lighter and lower carb during the day will allow you to slam down junk and shitload every night on fast and processed food, and still lose fat. If you stay within a calorie deficit, that may just work, but:

I argue people should stick to a base eating structure centered on whole foods most of the week, and then plan strategic cheat nights. Getting results is about what you do with your diet the majority of the time, not all the time.

I'm a realist, baby. I get that there are going to be parties where you want to eat great foods, chug from the spiked punch bowl, be naughty with Santa's helpers, and not worry about your diet at all. I'm the same way.

First off, eat your normal, lighter, lower carb lunch. This will ensure you're still optimizing the body's ability to burn fat for a good portion of the day and entering the feeding frenzy with relatively depleted energy reserves.

Why do I say strategic?

There will be lots of options to cheat, probably most nights of the week. So you have to be selective to limit the damage.

You probably don't want to waste a cheat night noshing on your cousin's bean dip and a bag of Frito's, complete with his favorite light beer.

But at a party at a 5-star restaurant, where the company is buying everything, the top shelf of the bar is open, and the cleavage is out and about, it may be time to let loose.

And Thanksgiving and Christmas Dinner? Forget about it. Hide your kids, yo. It's time to eat.

I don't proclaim this to be a "competition" diet, just a "functional" approach for people who want to look awesome yet have some kind of a life this holiday season.

It's a plan for those who want to focus on enjoying time with their family and friends instead of focusing on how bad their diet sucks Jingle Balls.

Most people are not trying to peak athletically or physique-wise during the holiday season anyways, so it's a good time to experiment with some different methods.

Remember, the holiday season is only 6 weeks. You already know the last couple of holiday runs with a more traditional approach didn't turn out so well, so what have you got to lose?

In other words, you've tried it their way and have a frame of reference. Now try it my way (or more accurately, evolution's way) and see how you do. Whichever approach you run with, if you reach your goals, we'll both be happy regardless.

Stop being obsessive and neurotic about food. Part of your diet should be strict, but part of it really doesn’t matter. Here’s why.
Diet Plan, Feeding the Ideal Body, Nutrition & Supplements
TC Luoma June 22 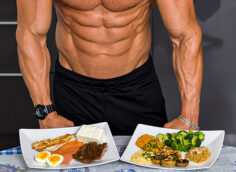